Who’s up for some curriculum talk?! What, what?! Let me hear y’all say YEAH!

If you’re not pumped, you probably don’t homeschool and can safety skip this post, unless you like fun book suggestions in which case, jump on the train before it pulls out! Woot, woot! 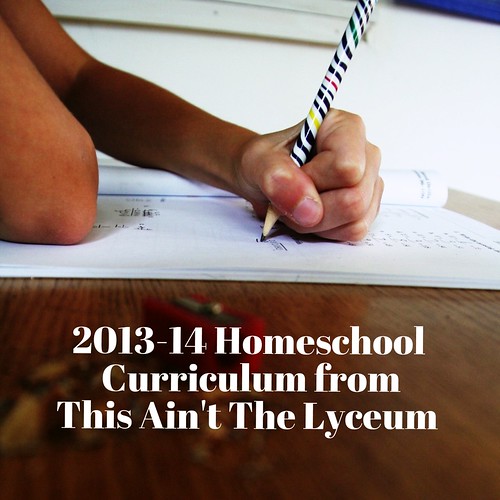 Last year when I posted our curriculum, I planned on actively teaching my three older kids while Fulton did Pre-K activities with his nurse. However, my whole year went down the toilet by the end of September. It wound up not being the worst thing in the world, however, it’s forced me to choose curriculum that my children can do independently. My hands on time is severely limited by Fulton’s daily care. I’m hoping to work more closely with them on some fun History, Art and Science projects, but if it doesn’t happen, I know we have the basics covered and they’ll be reading a ton of great books.

Courses Everyone Studies Together, kicking and screaming…

History- This year we’ll be covering the Middle Ages, or cycle year two, in history, which is about 400 A.D until 1600. A.D. I hashed out a weekly booklist the last time we went through this cycle which you can find here. We invested in many of the books then, so there’s only a few I’ll need to get from the library this time around. When all the kids were younger, it was more geared towards saint studies. This time, we’ll talk more in-depth about other medieval issues and spread them out between two weeks.

Science – Year Two science covers Earth Science and includes weather, astronomy as well as the crowd pleasing unit on volcanos! I still have my copy of The Usborne Science Encyclopedia

. Some of the information is a bit advanced but I liked the illustrations and tone of the book so I’m hoping we can glean some information from it. I also discovered neok12.com, a website with links to TONS of great science videos, and many other topics as well, that should keep the kids entertained (warning: HUGE time sink.) If I’m feeling ambitious, I’ll pick up Janice VanCleave’s Earth Science for Every Kid

book at the library, and assist in some hands on science. However, rarely do I have luck making any experiment work so I’m hoping the kids will take the initiative and leave me out of everything.

with the kids this year. The goal is for me to complete the program with them, as if me sitting and cursing at my own efforts may somehow encourage their innate artistic abilities. Both Teddy and Fulton love to draw and color so, theoretically, everyone can do this together…everyone…without tears. Good grief I’m questioning my sanity as I type this out. Let’s just say art is a big maybe.

Addie, Sixth Grade
Writing – Time 4 Writing. At least for this first trimester, both Addie and Byron are doing an online writing class. I just don’t have enough time to properly correct their writing and give constructive feedback. (Apparently yelling, “This tells me nothing about the main characters! You can do better!” is not conducive to improved writing.) I’m hoping after one class of being someone else’s problem, they, and I, will have a better idea of how to approach writing and what should be expected at their age.
Spelling – Catholic Heritage Curricula, My Catholic Speller Level E
Penmanship – (Addie asked to do penmanship this year to improve her cursive.) CHC Handwriting Level 4
Math – Finishing Abeka Mathematics 5, moving on to Mathmatics 6 by second trimester.
Latin – Classical Academic Press‘ Latin for Children Level B, and their Libellus de Historia B (History Reader) will tie into history. They’ll also be supplementing with CHC’s Little Latin Readers. (For the record, my husband oversees all things Latin. I am completely incapable of answering your Latin curriculum questions.)
Religion – Our parish CCD program follows Faith and Life. Otherwise, we live liturgically.
Literature – It’s always tough to find books Addie hasn’t read but for at least the first trimester she’ll cover:
Holes, Diary of Anne Frank, 20,000 Leagues Under the Sea, Jo’s Boys, Bridge to Terabitha, The Phantom Tollbooth, The Midwife’s Apprentice, Number the Stars, Where the Red Fern Grows, Whipping Boy, and Whittington. I should note that typically, I don’t make her write anything about these books. I talk to her about them but it’s more so I know she’s reading some quality books and not all twaddle. Also, she typically rereads books we own so while she might read these titles once this trimester, it’s more than likely she’ll pick them up again over the course of the year.

Byron, Fourth Grade (In the past, I’ve always said Byron straddled two grades, but this year he announced he wanted to be in one grade, so I said, because the majority of his work in at a fourth grade level, he can say he’s in fourth.That made him happy. Just don’t start asking to ride a school bus kid!)
Writing – Time 4 Writing
Spelling – I selected spelling words for Byron from the Literature books he’ll be reading. Byron can’t spell well at all (like his mother) but he does remember words from things he loves, like “Millennium Falcon’. It was his idea that we pick words he’ll be reading, as he generally enjoys the literature I select for him. I also allowed him to select some literature. Hopefully by copying and reading the words in context repeatedly, they’ll stick. I really like Sequential Spelling and would recommend it in a heartbeat for anyone who has a child who really struggles with spelling, but it was too parent intensive for me.
Math – Finish Math U See Gamma and begin Delta.
Latin – Latin For Children A
Religion – CCD
Literature – House at Pooh Corner, Georges’s Marvelous Medicine, Little Prince, Little House on the Prairie, How to Eat Fried Worms, The Lion, the Witch and the Wardrobe, Pinocchio, Tom Sawyer, The Borrowers, Holes, Because of Winn Dixie, an Encyclopedia Brown and The Hobbit. This list will probably cover the first and second trimesters.

Edith, Second Grade
Writing/ Penmanship – CHC Handwriting
Spelling – CHC My Catholic Spelling Level A.  All the kids will use Spelling City to complete spelling tests on Friday. I take the time to upload all the word lists in advance. It’s such a huge timesaver!
Math – Finish Abeka Mathematics 1, begin 2.
Latin – Song School Latin. This is a very fun and easy Latin program. All my kids like singing along to the tunes. Please don’t bore your young child to death with Prima Latina. Teach them to not hate Latin at an early age with Song School.
Religion – This is Edie’s First Holy Communion year so we’ll be working closely with her CCD teachers to get her ready for the sacraments and I also got CHC’s FHC  prep guide ‘Preparing to Receive Jesus’. It’s got some neat activities in it which sound really fun, yet inspirational, so, given my track record, we should complete at least two before we abandon it.
Reading – CHC’s Devotional Stories for Little Folks. I would like to move into a more traditional literature list like the older ones have, but Edie still resists reading anything new and as this series ties into the other workbooks she’s doing, I’ll assign chapters for at least the first trimester and reevaluate in December.

Fulton, Kindergarten
Reading/Phonics/Math – Lessons on Studyladder, various education aps, Bob Books and lots of sibling read alouds. I found an ap, Remote Mouse, for Fulton’s iPad that will allow him to control the cursor on our desktop Mac. Somehow, the thought of helping him complete lessons online vs write all the answers in a workbook for him sounds better in my mind. Plus we still have a good collection of educational toys he can choose from. I really don’t envision him spending more than 20 to 30 minutes with either his iPad or the desktop working on school.

So there you have it! Even though typing it all out in a post takes a bit of effort, I always enjoy recording all our choices in one place and hearing what other people are doing. I’m also planning other homeschool-ish related posts for this week as our family finally heads back. Is there anything about the who, what, when, wheres, whys and hows about homeschooling that you’d like to ask? Leave a comment or shoot me an email. I’d love to answer…and avoid actually homeschooling.