#31DaysofMary: Our Lady of La Vang

If you’re still with me on this cross-cultural Marian adventure, you deserve a bonus!

Just pretend it’s a song about Mary…in some way or another. Our Lady of La Vang, Vietnam
Apparitions that occurred in the woods of Quang Tri, Vietnam in 1798 to Catholics hiding from persecution. 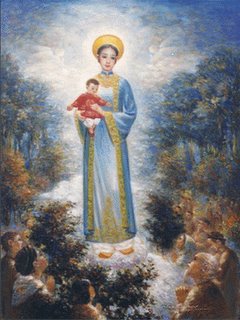 In 1798, the Nguyen Dynasty which ruled the entire country of Vietnam, declared that Catholicism was a foreign religious sect, and that it’s followers were leading a revolution against the ruling family. Within a short time, the country’s 37 parishes were under attack and thousands of Catholics were martyred.

Catholics had lived in Vietnam since priests first arrived in 1593. By the time of the persecutions, there were an estimated 320,000 faithful, 131 Vietnamese priests, fifty-five missionary priests, and three bishops. As the Dynasty moved forward with its plans for extermination, many Catholics took to the jungles to hide and await martyrdom.

While praying together one night, Our Lady appeared holding a child in her arms. She comforted those gathered in prayer, told them to boil and use the leaves around them for medicine and said:

My children, what you have asked of me, I have granted you, and henceforth whoever comes to this place to pray to me, I will listen to them.

She returned several times, and continued to offer support to the persecuted Catholics. A small hut of leaves and straw was built in her honor, and the faithful visited it and miraculous cures were reported. The first simple chapel was burnt in 1805. By 1866 the persecutions ended. An estimated 100,000 Vietnamese Catholics had been killed. A new brick church was completed in 1900 and updates and renovations continued throughout the years until a much larger complex was finished in 1928. It’s dedication was celebrated with 12,000 in attendance. In 1961, the church was named a basilica by Pope St. John XXIII.

Unfortunately, the basilica was destroyed in 1972 during the Vietnam War. On June 19, 1988, Pope St. John Paul II canonized 117 Vietnamese martyrs, stressed the importance of Our Lady, especially under the title to Our Lady of La Vang, and his hope for the rebuilding of the shrine to her. In his message he said:

In going to the Shrine of Our Lady of La Vang, so dear to the hearts of the Vietnamese faithful, pilgrims entrust to her their joys and their sorrows, their hopes and their sufferings. In this way they turn to God and make themselves intercessors for their families and for their entire people asking the Lord to instil sentiments of peace, brotherhood and solidarity in the hearts of all men and women, so that all the Vietnamese will be every day more closely united, in order to build a world in which it is pleasant to live, based on the essential spiritual and moral values and where each person can be recognized in his dignity as a child of God, and turn freely and with filial love to his Father in heaven who is “rich in mercy” (Eph 2:4).

4. I am particularly close to you in my thoughts at this time when the Church in your country is honouring the Mother of the Saviour; I entrust you to the intercession of Our Lady of La Vang and cordially impart to you and all your pastors an affectionate Apostolic Blessing, which I extend to the pilgrims who will visit the shrine in the spirit of the Jubilee and to all the Catholic faithful in Viêt Nam.

Today pilgrims can visit a portion of the destroyed church in La Vang.

Prayer to Our Lady of La Vang

Blessed Lady of La Vang be my mother and comfort me, especially in times of trial and unhappiness. Enter my heart and stay with me wherever I may go. Grant that one day, through you, I may find rest and peace in my Father’s house.
Amen