No one is more surprised than me.

And for the record, I still hate running.

A year ago, when this idea first entered my mind, I wondered if it was too ambitious, especially for someone who disliked running and was already hard pressed to find enough hours in a day. I wondered if people would step up and donate, spread the word and ultimately run a 5K with me.

But, you did, to the tune of $2,224, with more donations coming in and several donations given directly to the four charities I selected that are not included in my total. Plus, this weekend several sweaty selfies showed up in Facebook and around the blogosphere. (For the record, I ran my virtual 5K last Monday and snapped a picture of my sock. I can’t even play by my own rules.) If you still want to donate, or heck, do a virtual 5K please do so by this Saturday, June 28th. It’s Fulton’s birthday and since he doesn’t need more Star Wars action figures (SERIOUSLY GRANDMA) make a donation in his honor before I send out the checks on Monday.

Five years ago, one week before Fulton’s first birthday, my family was thrown a diagnosis of Spinal Muscular Atrophy. At that point, I wasn’t even sure I would see his sixth birthday. Everything seemed so dark, and I didn’t know how I would get out of the funk I was in. But I did. People ask how I do it: with God’s grace, one day at time. 1,825 days later, here we are, thankful and happy as all hell. There’s that gap toothed smile that says “My awesomeness refuses to be limited by SMA!” My last run on Saturday was for Laughing at My Nightmare and I had a great time running with my niece (who placed first in her age group!) and my sister-in-law. Lots of ridiculous pictures were taken in the photobooth and I got the opportunity to talk with LAMN founder Shane Burcaw and Shane’s dad Jon. The weather was great and, despite the Lehigh Valley hills, I ran the whole course; but forgot to check the clock as I crossed the finish line. I think my time will be available online later today, but I’m just going to assume it was a PR at 25:00. (snicker) Do I need to mention I still got left in the dust by a 72-year-old man? The overall winner was just over 16 minutes (!!!) and the first place gal in my age group was still so much faster than me. Really, I should run with blinkers.

Except I don’t see me running anymore. Sorry runners, but I’ve been waiting almost a year for a runners high with no luck.

Thank you again to all my friends and family (that includes you!) for supporting my campaign. If you haven’t, go to my 35K For SMA page and read through the archives and visit the links for some of the great SMA charities out there. 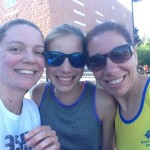 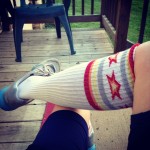 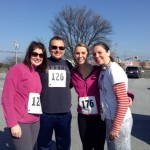 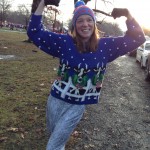 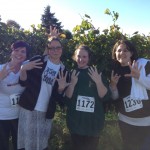 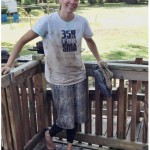 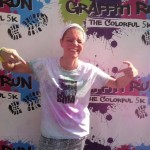