And A Partridge In A Pear Tree

Food . Humor . Photography . What I Wore

It’s the post so nice, I linked it thrice. Or it could just be that I’m lazy. And bloated. But in a very, very festive way.

Perhaps you noticed how I didn’t “jump on” as promised and provide said ugly sweater photo? I’m not going to ask why you noticed, I’m just going to pony up with this little slice of Christmas Holstein awesome; 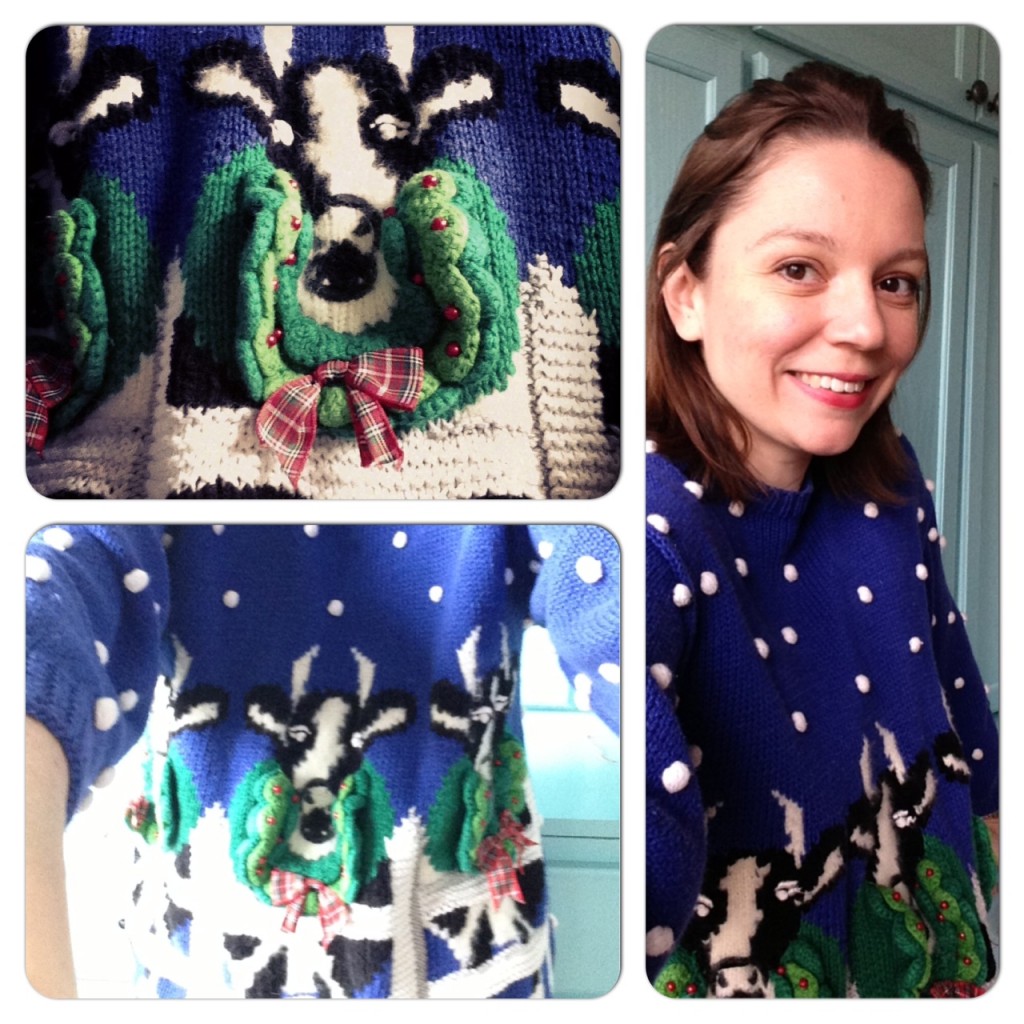 Caroling cows with 3D Christmas wreaths around their necks!! Why won’t any of my family offer to take my picture????

And did I wear it out in public to Target to help my kids pick out their last-minute gifts for friends? Yes. [insert thunderous applause.] Plus, I did just a touch of sashay into my dear friend’s Christmas Eve open house. She still invites our family year after year despite my behavior. Which I’m always grateful for since it saves me making dinner on an already busy day. In addition, the kids get to run around with friends and wear themselves out, making bedtime a whole lot easier. And three glasses of whiskey sour or wine later, the thought of staying up until the wee hours to wrap gifts doesn’t sound quite so bad. Bonus: this year her family gifted me a roll of bacon patterned duct tape, so I’m kind of indebted to them for life. If anyone knows a 13-year-old who can teach me how to create a modest jumper from it, hook a sister up. 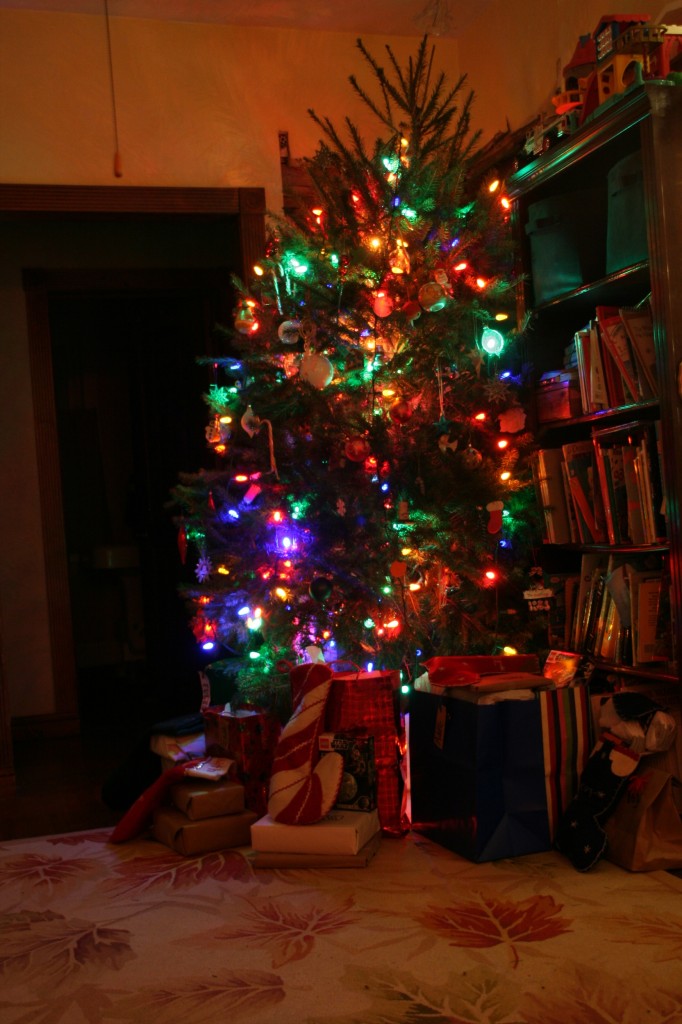 Charlie Brown called; he want’s his tree back.

After working late into the night concealing everyone’s presents in brown paper shopping bags (written differently it’s one of my favorite things) I woke up to a feverish, hacking Fulton demanding proof of Santa’s visit. This bug can’t kill his spirit! He was even asking to go to Mass, which should have tipped us off he was still very sick, but then our van wouldn’t start so those of us who didn’t go to midnight Mass made the trek to the 11 a.m. service, sans Fulton and Teddy. 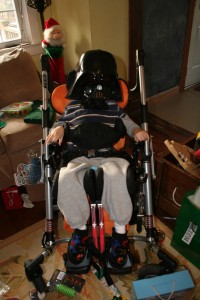 Fulton’s fever kept popping up and causing problems but less frequently as the days have worn on. As we have cancelled all Christmas travel plans, we will probably schedule some doctor visits in the coming days to make sure he’s on track towards making a full recovery. If increasing feisty-ness and sass mouth are any indication, I’d say he’s doing much better.

Upon arriving home, I slipped into something more comfortable and commenced my Christmas day tradition of drinking alcohol and eating cookies while yelling at the kids to get out of the kitchen because “I’m making dinner! And no you may not have any cookies!” Nom, nom, nom…. 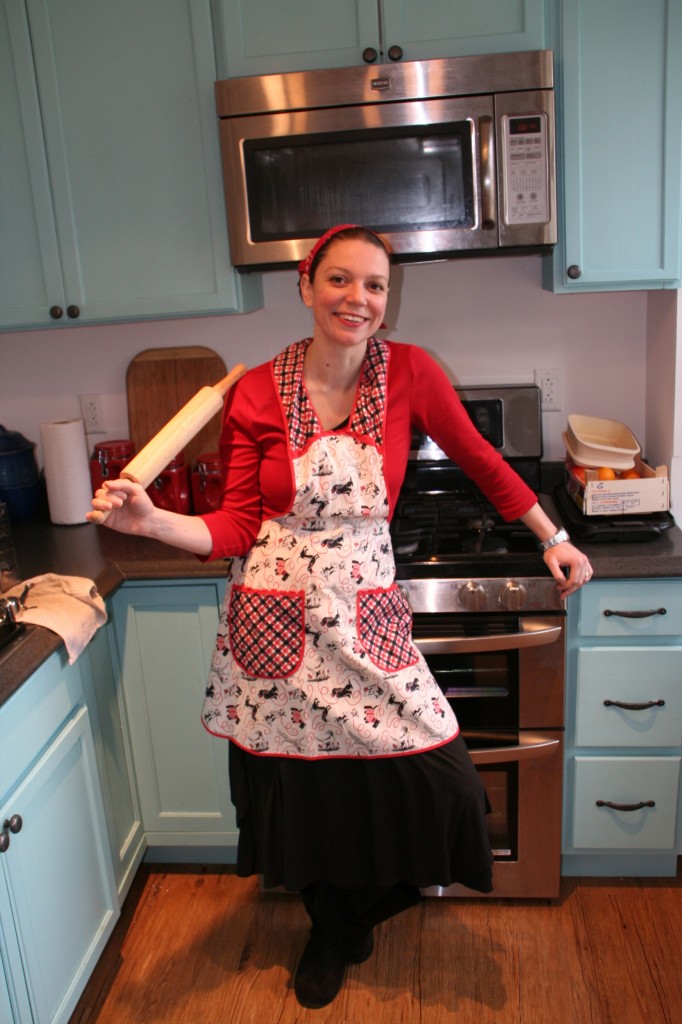 Kids listen when you wave around a rolling-pin. I don’t even know what’s its actual food preparation use is.

After a long day lovingly preparing a feast for your family (two-thirds of whom will say “I don’t like this. I’m done. Can I have a cookie?”) nothing says “quiet meditation and reflection” like a warm beverage topped with homemade whipahol. Since discovering the Dionysian treat of alcohol infused whipping cream a few years back, it’s become a holiday tradition. 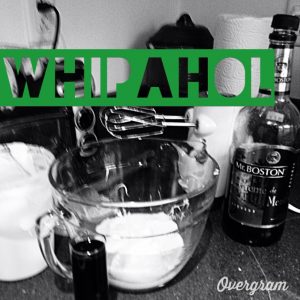 I usually start with about two cups heavy whipping cream to one very large shot of alcohol. I also add sugar, a tablespoon at a time, to taste. This year I made two batches. One used creme de menthe, which is great on hot cocoa and the second used brandy, which is great on coffee.  Combine all the ingredients and whip until soft peaks form. Taste and add more cream if the alcohol taste is too strong, more sugar for more sweetness or more alcohol if it’s too weak. Spoon on and drink up after the kiddies are in bed, or while they’re preoccupied with breakfast, whatever.

I hope the first few days of your Christmas season have been virus free, filled with family and friends and laden with good food and drink. But if you start feeling smothered by all the holiday hooplah, swing by one, or all,  of the great link -ups hosted by Clan Donaldson, Camp Patton or Like Mother, Like Daughter.