Big Family, Little Kitchen: How We Make It Work

Already, I’m hesitant to use the title above. I know plenty of families bigger than mine and I know other families with small kitchens. However, we have more than the national average of kids and a smaller than average kitchen so hopefully this post is helpful to someone. But seriously, if you’re one of the few people with 23 kids and a small closet for a kitchen, it’s understood your life is 10 times harder than mine and you’re a saint for dealing with your circumstances so bravely. Plus, I know these are first world problems. I KNOW that people in other parts of the world are living in hut the size of my kitchen. I will donate money to an appropriate charity immediately after finishing this post.

Now with all the disclaimers off my chest, let’s talk small kitchens. First, bear with some background. Up until about four years ago, our kitchen was a front porch. 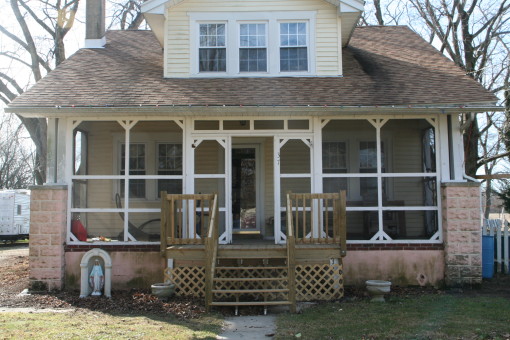 We added the small porch in the front because the brick steps underneath were crumbling and too expensive to repair.

The existing kitchen was at the back of the house and was also the main entrance. It was small, dark, ugly, and crowded with coats, shoes and whatever the kids dragged inside. Even when we bought our house, we knew eventually we’d redo the kitchen. We were tolerating it until then.

Once we got Fulton’s diagnosis and knew a wheelchair was in our future, all house plans now became focused on making this 1920’s bungalow accessible  Through donations we put a large ramp, deck and sliding glass door on the back of the house which opened into, you guessed it, our kitchen. The cabinets, stove, microwave were in an L shape in one corner with the refrigerator in the opposite corner. Now we also had another doorway taking up wall space where there had been storage.

Once the ramp was in place, the next issue was the tiny doorway between the kitchen and dining room. You couldn’t see from the kitchen into any other rooms of the house and if Fulton parked his chair near the doorway, no one could go in or out. 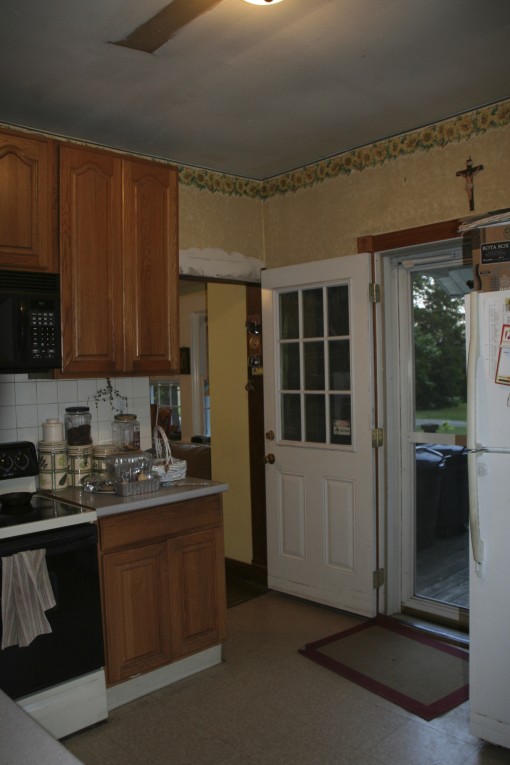 Imagine 6-7 people filling this room and trying to get into the rest of the house while the 3 year old is taking his sweet time driving through the doorway. 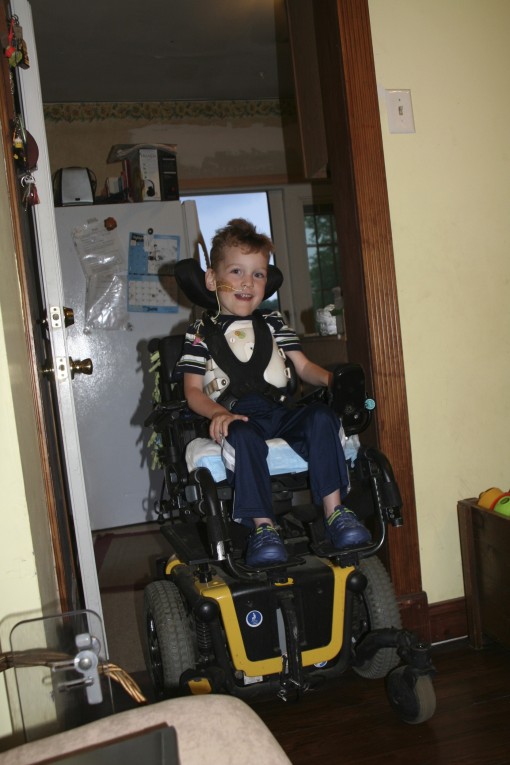 “I love scraping up the woodwork!”

Widening the doorway would eliminate most of the cabinets in the old kitchen, but building an addition to move the kitchen and widen the doorway was also out too due to cost. On a whim, I took a measuring tape to our screened in front porch. We consulted with a contractor and it would be within our budget to enclose the porch. That would also allow us to turn the old kitchen into a mudroom; something every large family dreams about. 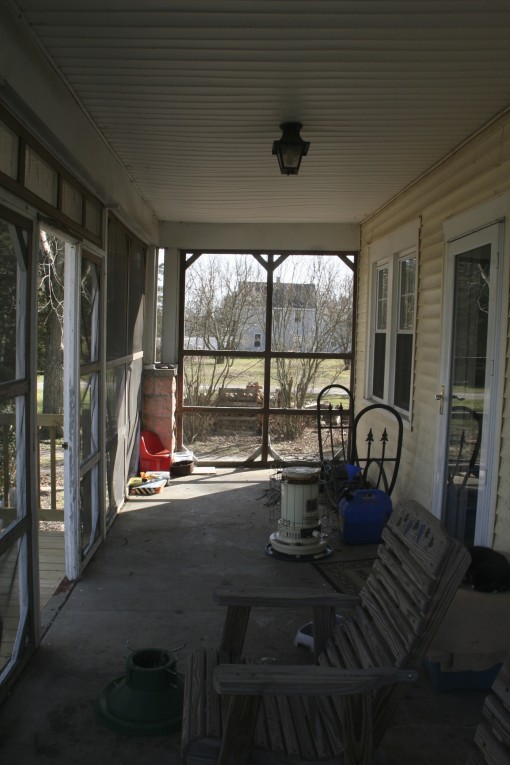 The side of the porch that would become the school room. 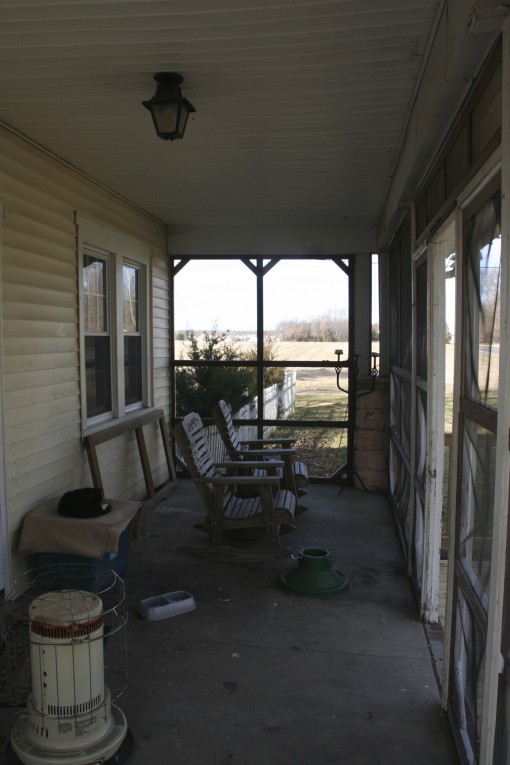 The side of the porch that would become the kitchen.

So we moved the kitchen. 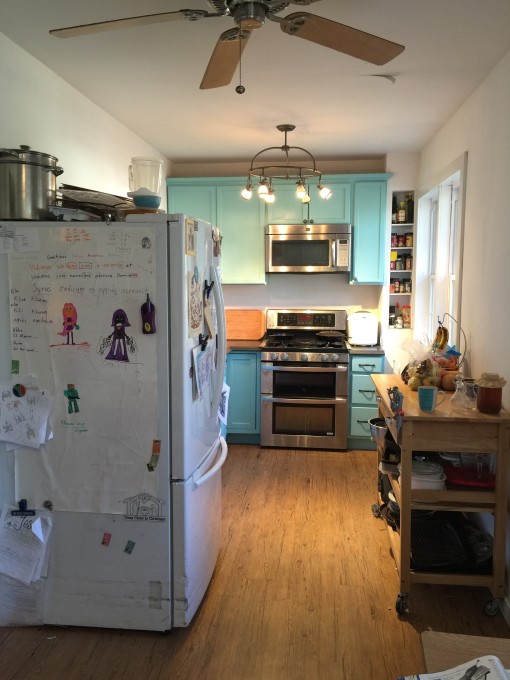 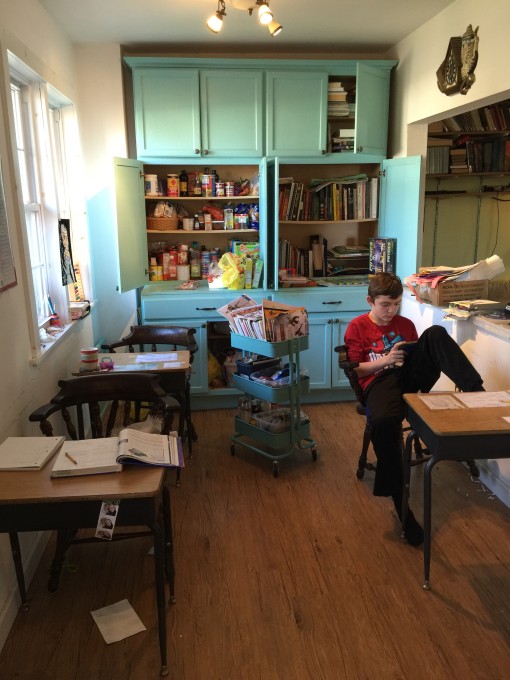 I didn’t feel like tidying this side too much before taking a picture. Just keepin’ it real.

People who saw our porch before are often amazed that it was big enough to house a kitchen, but the tape measure doesn’t lie! I designed the kitchen from the ground up, keeping in mind the minimum space we would need to house food and kitchen stuff for our family, while trying to prevent it from feeling as tiny as it is (about 240 square feet including the school room.) Here’s what we did: 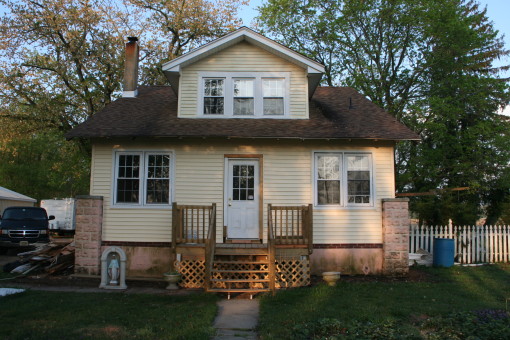 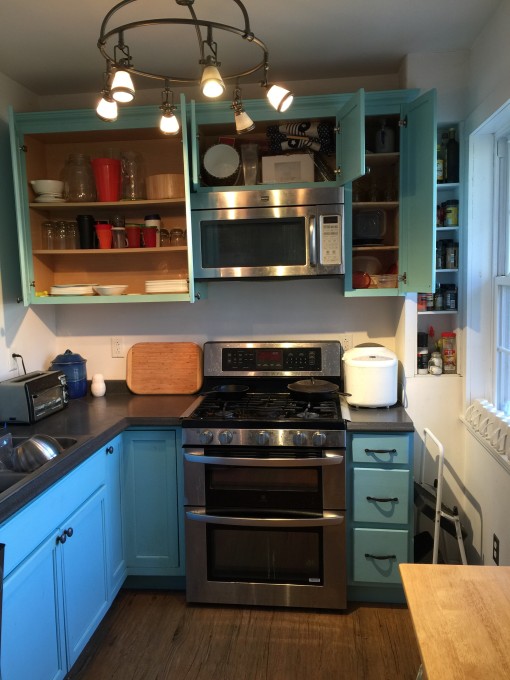 I took a picture with the cabinets open so you can see how much they hold. 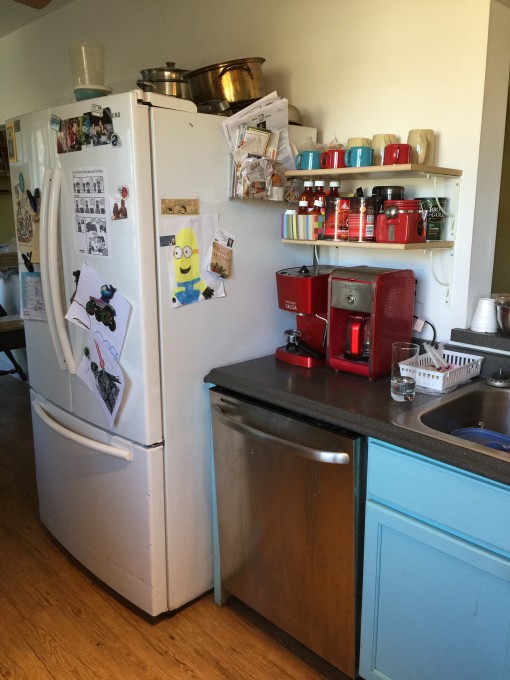 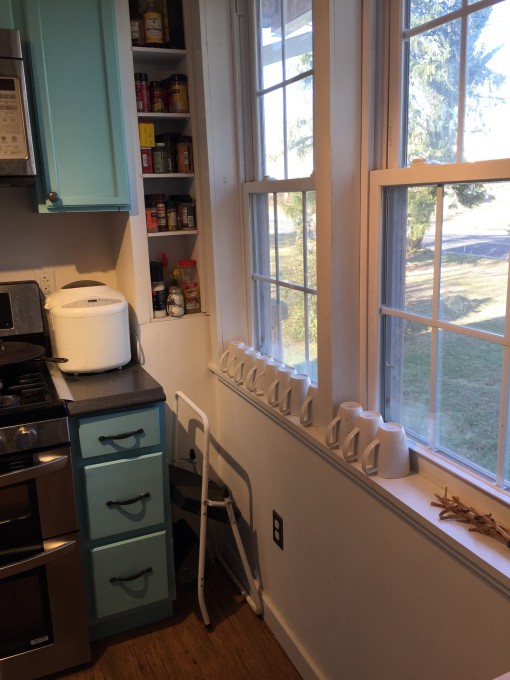 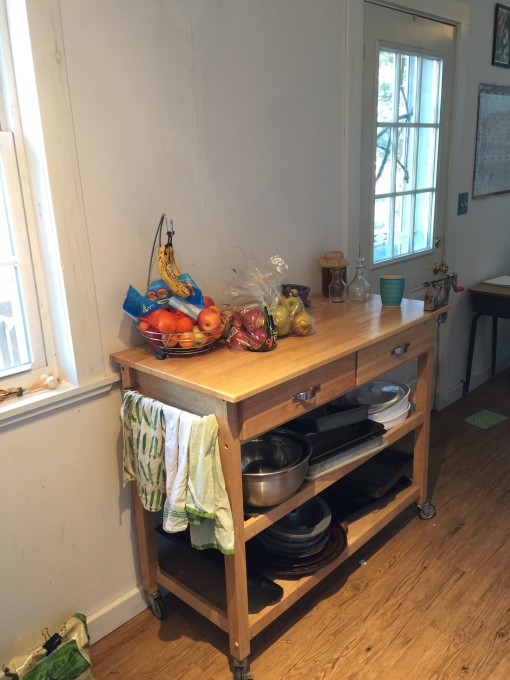 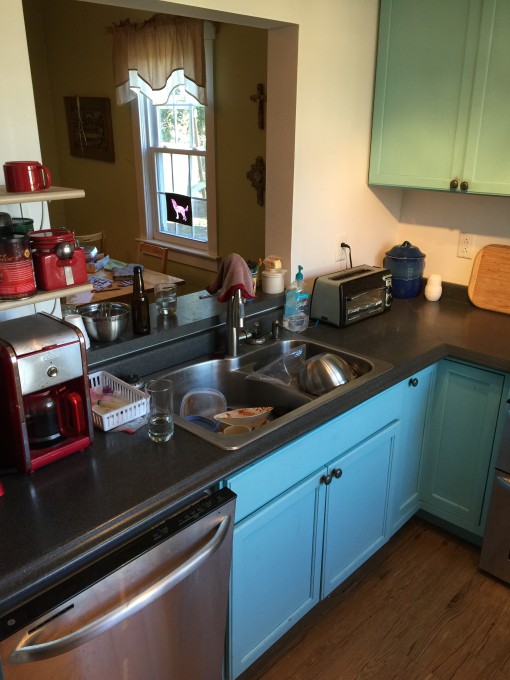 Looking from the sink into the dining room.

On the other side of the kitchen is a large wall of cabinetry that is our pantry and school storage. I also keep lesser used appliances up high. These were all in-stock unfinished cabinets from Home Depot that we painted ourselves. We used Cabinet Coat paint and it stands up well to all the scrubbing I need to do. The desks were scored off Ebay. We also left the wall open where the front windows used to be on this side so if you stand in the school room you can actually look the whole way through the house and out the back sliding glass doors. It’s pretty cool. 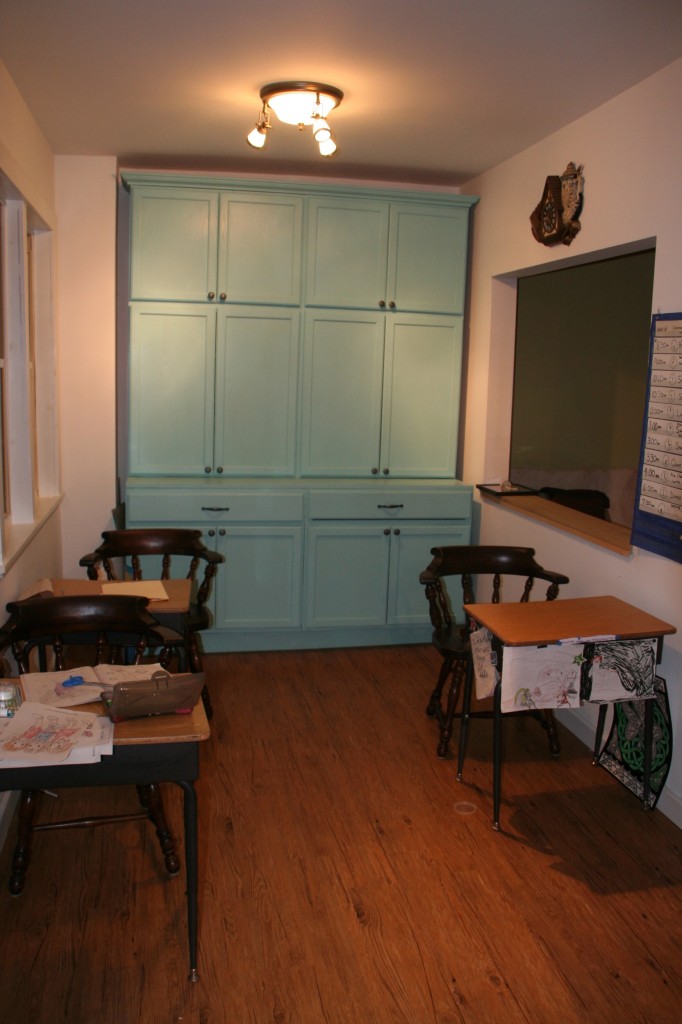 Now, there are some downsides. If one of the little boys drives their wheelchair into the kitchen, and inevitably parks between the kitchen cart and the refrigerator, YOU SHALL NOT PASS! And, if the same little goobers drive into the school room and turn around, they’re likely to hit a desk or, snap a door off the pantry cabinets. It’s difficult for more than two people to be working in the kitchen at the same time, so it’s not uncommon for whomever is making dinner to also be yelling “Get out of the kitchen!!” It’s also not uncommon for the counter space we do have to get covered with dishes and food prep fallout.

But for the most part, I love our kitchen. It was so great to plan everything and then watch it come to fruition. I’m confident we used every inch in the best way possible and as a result, the space is efficient and enjoyable to use. Plus it’s a good dance floor.

Any questions? Is there something missing from my small kitchen that you couldn’t live without? How big is your kitchen?