Last week Christy wrote a review about Dorothy Day’s autobiography, ‘ The Long Loneliness’. Day is one of my favorite Catholics and discovering her writings on the Catholic Worker Movement were a major turning point in my life. I know what your thinking, “But wait Kelly, wasn’t she just some wacko peace-nik hippy communist? She wasn’t really Catholic, was she??”

Unfortunately today, the Catholic Worker movement does not represent the best in orthodox Catholic teaching. When I started my first blog ‘The Next Worker’ in 2006 I was hard pressed to find any other website or blog that talked about The Catholic Worker while also being faithful to the Magisterium. So my job was to share with the world (through my tiny niche blog that no more than 100 people ever read) all the wonderful things Dorothy Day and co-founder Peter Maurin did and how, yes, they were actually both very Catholic people.

Certainly, Day’s life up to the point of her conversion was not much better than St. Augustine’s. She was a communist sympathizer, she had an abortion and she lived with a man and had a child with him. But then there the story changes! She converts and baptizes her child and when her common law atheist husband refuses to convert and enter into a sacramental marriage, they separate with much pain on her part. But this is only the beginning of a life of difficult decisions made on faith.

I think Christy made a great point in her review;

I shouldn’t have been surprised, nor should anyone really, that Dorothy’s politics once she experienced her conversion were not left wing or right wing, but simply Catholic. Hence why she had both supporters and opponents from every side. She never took a blatantly popular position and ran with it, but lived the Catholic truth of wanting the political sphere to be one that enhanced and supported human dignity in every way possible.

Yes, she took views on both sides of the aisle. She was an anti-war protester and a complete pacifist, however she also viewed the State as the last entity to care for a nations sick and poor. She laid the burden squarely on the shoulders of every Christian and she didn’t just talk the talk, she walked the walk. She lived in her Worker House, in a small cold room her whole life and served whomever walked through the door.

We are all supposed to see Christ in each other. “Inasmuch as you have done it unto the least (or worst) of these my brethren, ye have done it unto Me.” It is hard to see the dear sweet Christ in many a pestering drunk that comes in demanding attention. “Love is a harsh and dreadful thing, for Jesus to ask of us.” “You love God as much as the one you love the least.” These staggering, unlovely, filthy ones who come in waving a bottle at you and cursing you, and saying “Peter Maurin started theses places for the likes of us!” are God’s messengers. I am reminded of the classic story of St. Teresa of Avila who, when she fell off her stumbling mule into the shallow river and cried out to God in protest, heard Him say, “This is the way I treat my friends” (a sardonic or a humorous God?). And she flung back at him, “That is why you have so few of them.” – Dorothy Day, May 1973

I started going back and rereading some articles and books and thought this week I would share my favorite books / resources  on Dorothy Day for anyone else who is curious to learn more.

1. The Long Loneliness; Days autobiography is a great starting point.

2. The Dorothy Day Collection; 721 articles from The Catholic Worker newspaper and four books all penned by Day are available online. Sorted by date, theme or easily searchable.

, by William Miller. A long book but the definitive biography on the saint written by a close personal friend. It’s not tainted with liberal bias as some biographers were want to do. 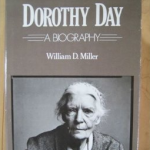 4. The Duty of Delight, the complete diaries of Dorothy Day. Another long volume. I’m still chugging through it. But her personal thoughts on her family her work and her faith. Describes her praying the hours and her attendance at daily Mass and frequent adoration.

5. Saints and Social Justice: A Guide to Changing the World, Brandon Vogt. Brandon’s book is not yet released but I’m excited to read it, and I’m hopeful that it will introduce a new generation to Day and to what the Church truly means by Social Justice. It’s not a dirty phrase!

The cause for her sainthood has also been opened, and she is officially a ‘Servant of God.’ You can visit her guild’s page for more information. And The Distributist Review also maintains a page of Classic Distributism articles which can give you insight into Day and her contemporaries and their inspiration. Feel free to leave your questions and I will do my best to answer them between math and dinner prep.

For more favorites of the Catholic flavor, swing back to healthier Hallie’s.