{FF} If I Knew Any Cliches About the Midwest, I’d Insert Them Here

I’m back, I’m back…just barely. A big shout out to Chicago and all its congested roadways for robbing me of three hours of my life that I’ll never recover. If the opportunity to repay Chi-town (see definition #6) with several hours of dissatisfied toddler tantrum and endless five-year old questioning ever arises, you know it’s on.

But twelve days in the Midwest couldn’t be all bad right? Back to blogging with the fabulous Hallie and my Five Favorites.

1. First and foremost, ZZZ Threadz Shirts. Smack dab in the middle of downtown Milwaukee’s Summerfest sat a booth with the words “Fine Embroidered Crap” printed across the top. I glanced at Tony and then basically broke off in a run with my stroller. By the time the rest of the family arrived, I was in love. Who wouldn’t be head over heels for vintage shirts with awesome embroidery of scorpions, Sasquatch with a wristwatch,  or a gorilla and a shark fighting. (Byron asked to have that put on his birthday list.) The website doesn’t picture many of the designs, including the one I ultimately bought, so if you can visit them in the midwest this summer or in their hometown of Austin, do it.  I guarantee you’ll find something that will take the attention off the spit up on your shoulder.  (I wonder if they would embroider me a denim jumper…….) 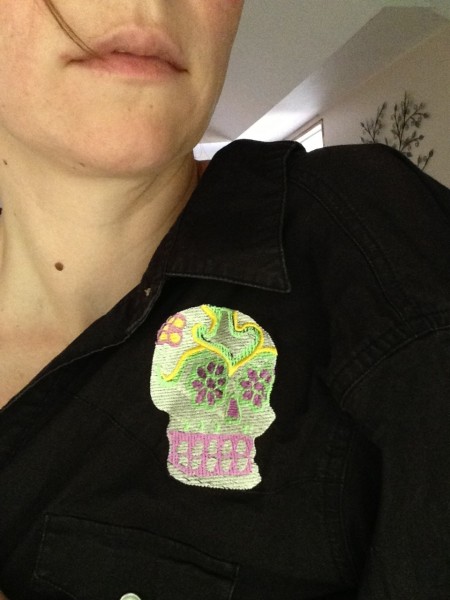 2. With the kids distracted by cousins and Tony engulfed in a never-ending Madden playoff series with his brother, I got my hair cut for the first time in almost 18 months. I told the stylist I’d been trying to rock the tousled, beachy wave look and she recommended Healthy Sexy Hair, Soy Renewal Beach Spray.

It’s like a day at the shore in a bottle that’s actually good for my hair. Even Tony took a whiff and remarked how it reminded him of how I smell after a day at Ocean City, minus the “hauling five kids to the beach alone shortens my lifespan” crankiness. For gratuitous selfies of beach haired Kelly drinking coffee, correcting math and sticking out my tongue with Fulton, follow me on Instagram.

3. I’d like to personally thank John S. from the Rawson Ave. Pick’ N Save for very enthusiastically directing me to his store’s gluten free beer selections in an only minimally creepy way. There I discovered Sprecher Brewery’s West African style, gluten free beer, Shakparo. Who knew you had to go to Wisconsin to find a good West African GF beer? Plus, John gave me a lovely reference guide to gluten free shopping, which he assured me could be used at most any grocery store. So if you’re wherever it was in Wisconsin that I was, look up John and tell him I said hi!

4. Touring the Fulton Sheen museum and then meeting up with Bonnie in Peoria, Illinois. Since Bonnie’s been too busy giving birth and all, I’ll get to break the news that yes, she really is that nice and funny in person. Even when you say really stupid things that you later regret. Like when I told her I had a friend who’s large newborn son broke his collarbone during delivery, immediately after she shared her concerns about birthing another large baby. When I reflected on my comments later the next day (cause I’m that clueless), I wailed to my husband, “Who says that to a pregnant women two days from induction? What is wrong with me?” Seriously, you can’t take me anywhere. I’m going to make a t-shirt that says “Socially awkward and unable to shut up.” and wear it whenever I meet new people just so their expectations are nice and low. 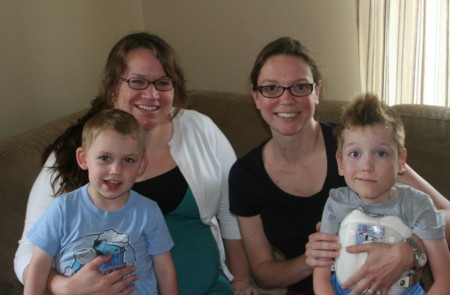 Proof I’m not making it up.

[That cutey on Bonnie’s lap is James Fulton, and if you’re not familiar with his story, be sure to get caught up. ]

5. Tony’s aunt was kind enough to get us a copy of a menu from a restaurant his grandparents and great aunts and uncles ran years ago in Illinois. The reason we wanted it to frame and display? Two page menu; one page of food, one page of alcoholic drinks. It’s a great reminder of the wonderful family I married into. (Just like the 1967 ‘Willard Gun Shop’ calendar we have hanging up is a good reminder to my husband of my father.) 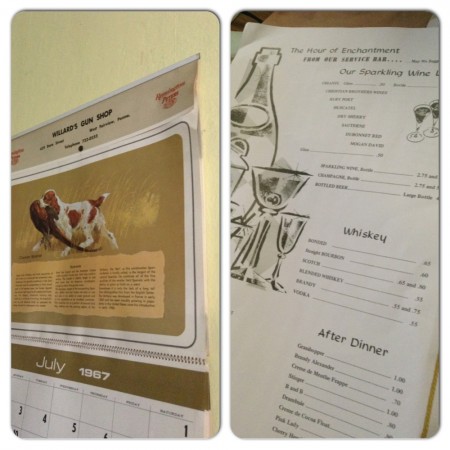 Not visible is the ‘Before Dinner’ drink selections. Who needs food?

After twelve days away, I’ll need at least six days at home to achieve my prior groove. (I blame you Central Time!)  While I’m recovering, and looking for a local Shakparo distributor, be sure to swing back to Hallie’s for more favorites that will gain you an hour.