{FF} Pulling It Together To Stay In The Game

Coming to you from my favorite corner of the living room couch, day 3 of the seven-day blog-a-thon!

Yes, I’m well aware I didn’t post yesterday. Instead I spent most of my time curled up on the couch trying to convince myself I wasn’t sick while my intestines argued otherwise. Today, I’m trying to take it easy so that tomorrow I can get back to breathing down my kid’s necks without simultaneously throwing up.

Today’s favorites represent the best and the brightest parts of my week, but without too much thought since I’m still groggy and really haven’t regained full mental capacity, i.e. thinking hurts. 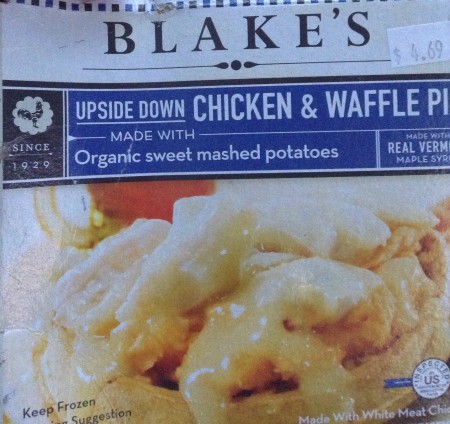 In PA Dutch country, everyone eats chicken and waffles. When firehouses want to hold a fundraiser; chicken and waffles dinner. Every restaurant has chicken and waffles on the menu. Right up there with whoopie pies and shoo fly pie is chicken and waffles. And of course, waffles have gluten. Lots and lots of tasty gluten. Sure, if you’re willing to sell your children into slavery you can afford a Van’s GF waffle habit, but for me, I just don’t have chicken and waffles near as often as I’d like. (Or frankly, as much as my Lancaster County DNA requires.) But then, buried deep in the freezer section of a special gluten-free store in Wisconsin I found this chicken and waffle meal and I fell to my knees and cried out in joy.  (My SIL will vouch for this.) On Sunday, after a stressful day of trying to get Addie to sleep away camp, I finally cooked it up and it soothed my soul and realigned the cosmos all at once. Now I just need to find a local supplier.

Groceries delivered right to your door; what could be better than that when you’re sick? I placed my order on Monday evening and by 4:30 p.m. Tuesday it was at my door. I tried not to feel to self conscious as I signed for the groceries in my ratty PJs and greasy hair, but better that one delivery man catches me in those leopard print lounge pants than all of Target. 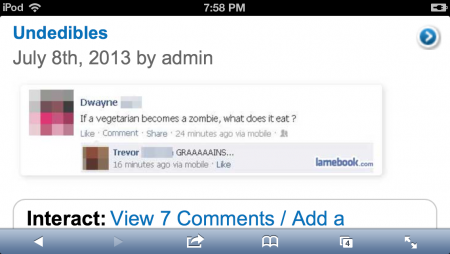 When I’m too restless to sleep but too sick to do anything but lay in bed, I find refugee in Lamebook. If you’re easily offended, do not visit this site, but if you’re an adult with a properly formed conscience, it’s great for a mindless laugh.

4. The washable slipcovers on my couch.

I‘ve mentioned Home Reserve Furniture before, but it’s times like these, i.e. when Teddy has explosive diarrhea, that I am most grateful for the durability of my slipcovers. I washed the same covers twice in 24 hours because I was too sick to think that maybe I should stick something under this kid or seal up the legs of his diaper with caulk. In the five years we’ve owned the couch and washed these covers due to accidents of all sorts, they still look and feel as good as new.

I need to walk you through this part of my day because it best illustrates what happens when my oldest isn’t around to point out the obvious. [poop story warning]

So, Edie pipes up repeatedly to announce that Teddy stinks. After 10 minutes of trying to fool her and I that it was only gas, I picked him up, realized he’d soiled a couch cushion and carried him to his room and changed him. Then I took his clothes and the cushion cover down to the washing machine which, of course, was full of wet clothes. I moved clothes to the drier, went up stairs, and sat down on the couch. “Wow, it still really stinks in here, ” I thought. Ten minutes later as I was doing something else I thought “That smell won’t go away. I guess my house is destined to smell like crap today.” Even later, I sit down and glance at my shirt and realize it has poop all down the front of it. So I change and curse and go about my wretched existence. Fast forward an hour;  I went to straighten the cushions on the couch which suffered the blowout and as I stick my hand down between the cushions, poop. Somehow, Teddy managed to shoot it down through the cushions and create a pool underneath. How in the world I missed that I’ll never know. I seriously considered leaving the mess for Tony and feigning ignorance.

And it wasn’t even lunch, and I was already queasy with a bug. 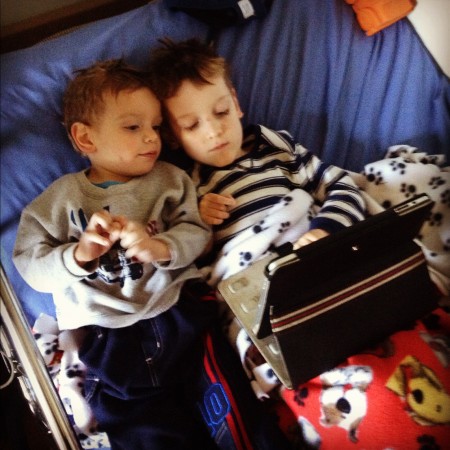 Old picture because snapping one yesterday to capture all the excitement would’ve pushed my delicate constitution over the edge.

Sure, it’s great for all his boring complex medical needs but recently the younger three learned how to use it to entertain themselves for hours! Which is fine once they understood they couldn’t lower the bed because then it would crush medical supplies. As I draped myself across the poo smelling couch and tried to will myself to live, Fulton pushed the buttons on the bed to “raise it to the ceiling!” while Edie and Teddy giggled with delight as the head and foot of the mattress were slowly folded upon them. If they get bored tomorrow, maybe I’ll let them play with some exam gloves.

Will I get back on track for the rest of the seven days? Who knows. Thankfully there’s tons of other bloggers picking up the slack. Check them out if you haven’t already. And don’t forget all the rest of the five fruity flavors hosted this week at Grace’s. Prayers for safe travels Hallie! Save me an air-sickness bag!