Ghost of Christmas Past

Before I sign off for the Christmas season (not all of it, just until next week), I wanted to share some of my favorite Christmas memories. This year, as a present to my parents, I’ve offered to sort through all their old photos, currently tossed hither and thither throughout their house and attempt to put them in some reasonable order. I’ve loved pouring over all the old photos of my childhood and I know my sister has been thrilled to find me sharing them across social media. Don’t worry sis! I got some great ones of you in this post too!!! 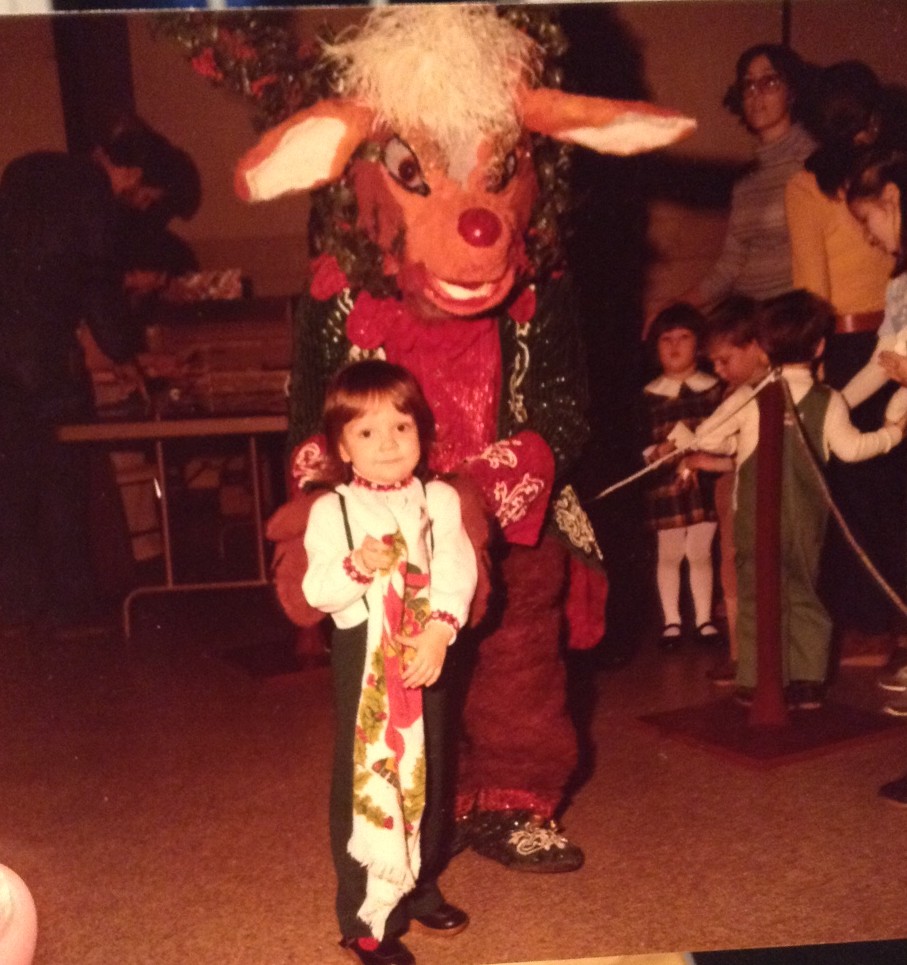 Here I am meeting with the most terrifying of Christmas characters, the murderous Rudolf the Red Nosed Reindeer. Looks like he’s leading me off to the slaughter. I’m obviously pleading with my father with my eyes, “Where’s my candy cane and what is this thing touching me?” I’m carrying a towel instead of a security blanket because I took a towel with me everywhere as a little child. Frankly, I’m surprised I took my thumb out of my mouth long enough for this picture. (Byron made the astute observation that this creature looks like it’s right out of Five Nights at Freddy’s.)

Unfortunately, I can’t find a photo of the year my sister and I got Cabbage Patch dolls. My parents were very proud of the fact that they got us those dolls without facing a crazed holiday mob. From what I understand, they asked a friend who worked in retail to set a couple aside in a back room and my dad just picked them up at his convenience My mom has kept all my Cabbage Patch dolls and now my daughters play with them. Seems a worthwhile investment. 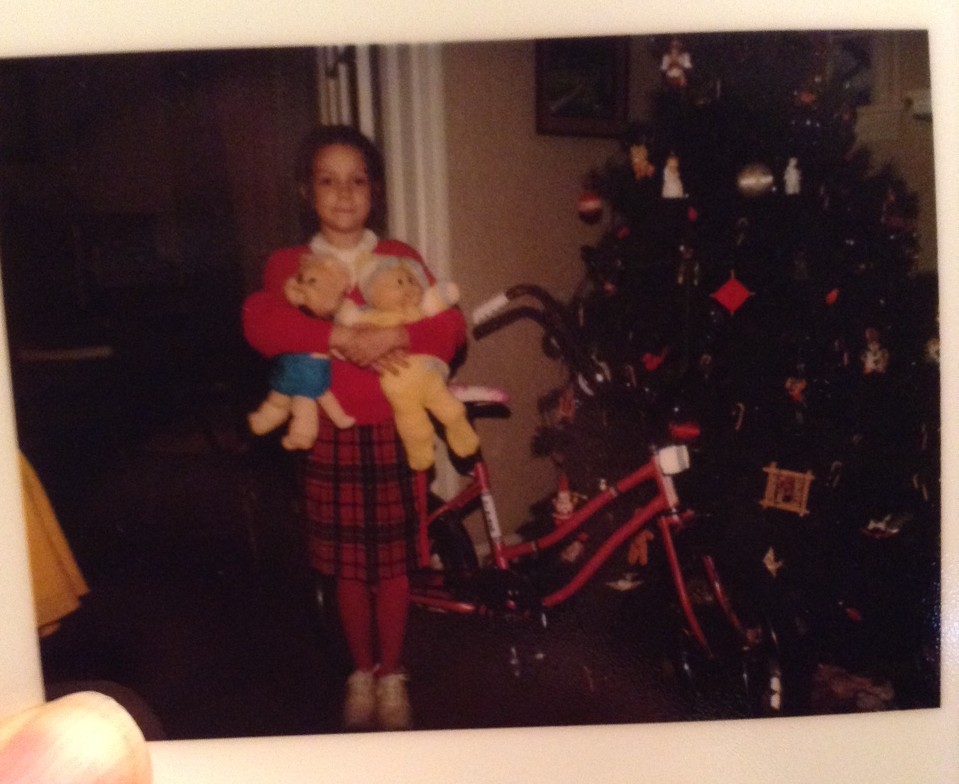 Here I am with more Cabbage Patch dolls and a hot pink bike with a huge banana seat. Do I look excited about the bike? Because I was most certainly not. My sister had gotten a sweet purple bike with a basket on the front featuring a unicorn. I was very jealous. My bike was huge and, in my young opinion, old fashioned looking. No one I knew had a banana seat on their bike. I wouldn’t learn to ride for many, many more years, at which point I demanded a ten speed. 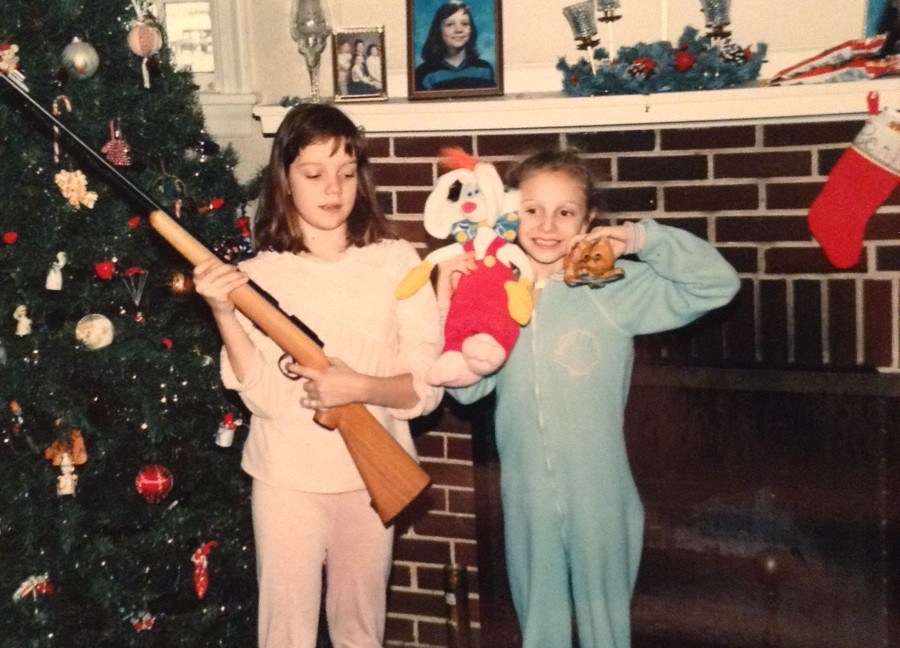 If you follow me on Facebook, and are here to learn about the rifle I got for Christmas, this is the money shot. Here’s 11 year old me with a 22 rifle, and a horrible haircut, obviously wondering if I can use my sisters new Roger Rabbit stuffed animal for target practice. The very first lesson I learned was “DON’T POINT THAT THING AT ANYONE! ALWAYS TREAT IT LIKE IT’S LOADED!” When we went to my grandparent’s house later that morning, I joyfully told everyone, “I got a gun! I got a gun!” And a few relatives were like, “Oh, a BB gun?” And I was all “NO WAY, a real gun that shoots bullets!” To which everyone politely acted like this was a perfectly sane and rational thing to give a girl on the cusp of womanhood. 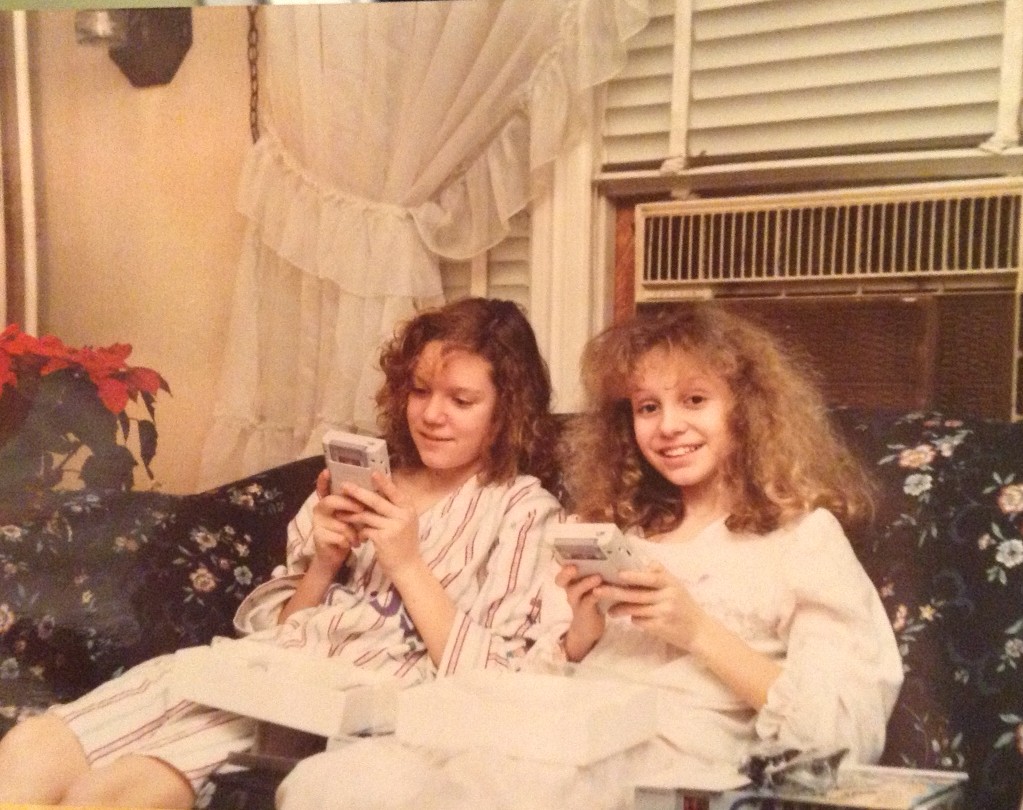 A couple years later, I finally permed my head of hair and look how much better it looked! My sister has naturally curly hair, which I always envied. It looked like that pouf until she discovered styling products in high school. From thence forth, she’s always been more popular with the guys. Anyway, we were totally excited to receive Gameboys that year. Yes, the original handheld device! Forget your smartphones, and your iPods and tablets. We had grainy black and white Tetris! 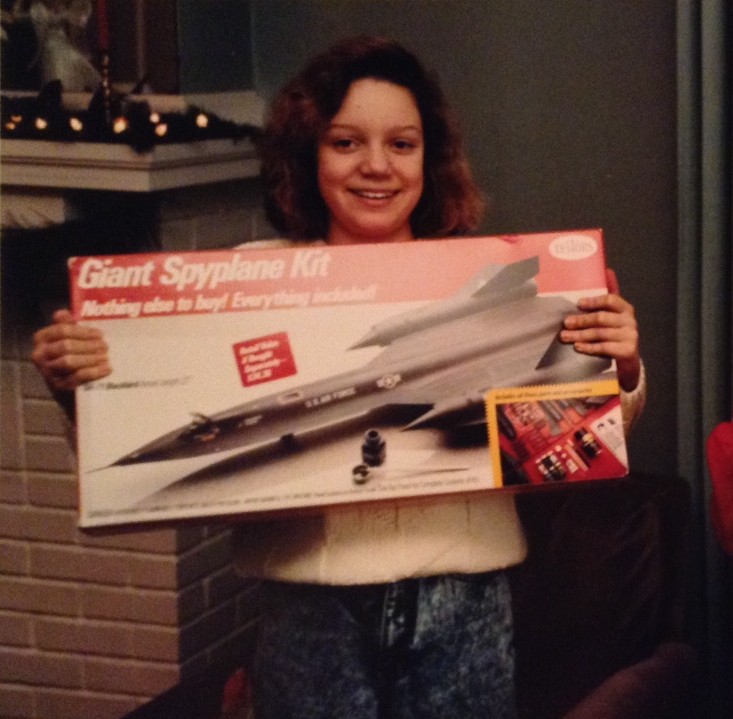 It was also the year I wore acid washed jeans and got a giant plane model which I thought I wanted, but realized as soon as I took it out of the box, that I didn’t. Those things are complicated yo’. 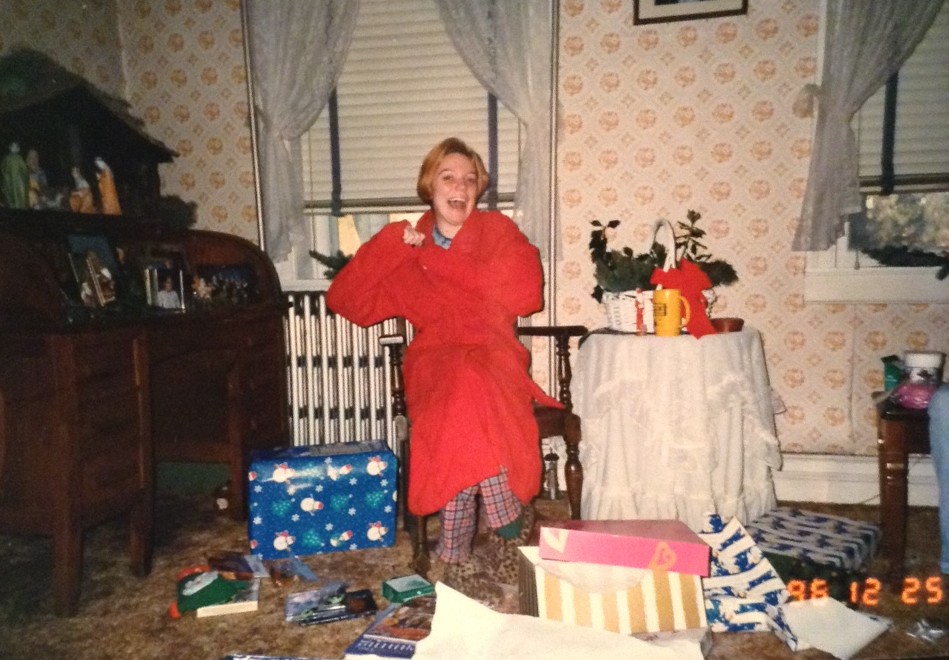 Fast forward to my first year of college. What’s that I’m wearing? I believe it’s my first robe!!! I quickly realized that walking from my room to the bathroom required some, uh, coverage. Not that I was all about parading around in my skivies at home, but in front of strangers I wanted maximum coverage. This started me down a path of large terry cloth robes that continues to this very day. For the record, red hides stains much, much better than white. And yes, my hair is orange.

We’ll skip a few more years of me with garish hair and loudly printed shirts and focus on those happy Christmases as Tony and I started our own family. The most notable being the year Edie was born three and a half weeks before her due date on December 16th 2005. She was fine and we came home in the usual time but it totally threw a wretch in our planning. We never managed to get a real tree and instead cut one out of paper and hung it on the wall. Tony ran to Target on Christmas Eve and got the last stocking for Edie. We were also so, so poor that year that many of our gifts for each other came from Goodwill and Freecycle. Thankfully, the kids didn’t seem to notice. (If I can find a photo to add to this, I will, but I’m afraid it’s buried on a disc somewhere. 2015 is the year I get OUR photos in order.) 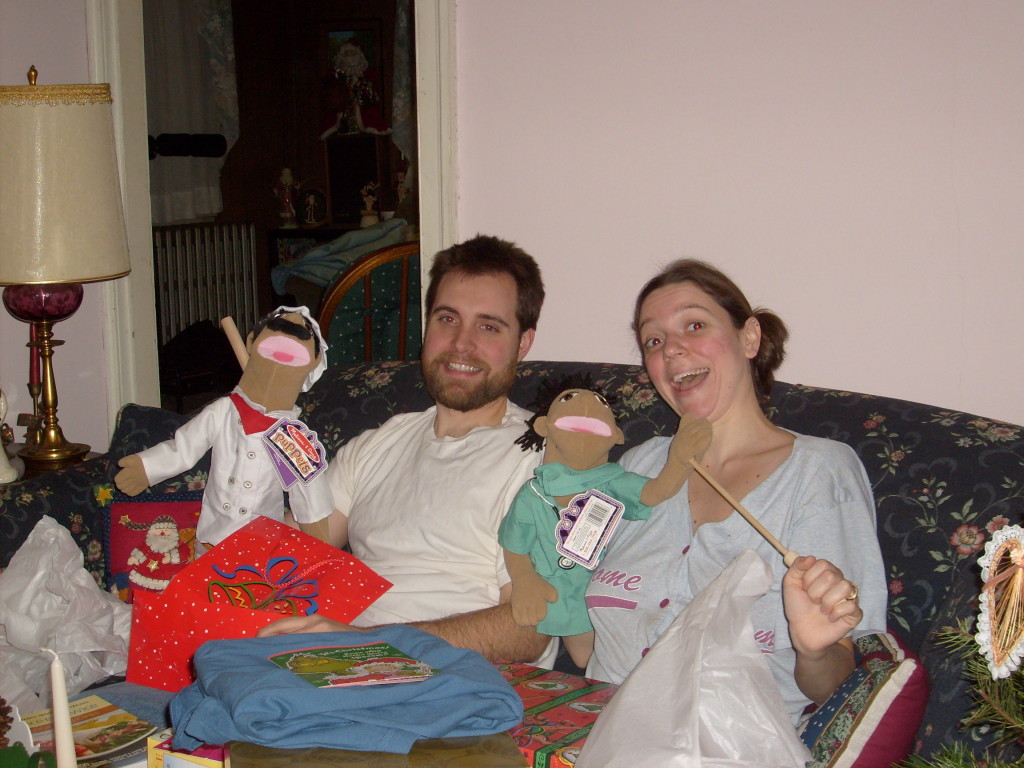 I feel compelled to mention the year my sister got our whole family puppets, even Tony and I, perhaps envisioning a traveling family puppet troupe. I’m sorry to say, it never took off and ultimately, the kids used the sticks to hurt one another. 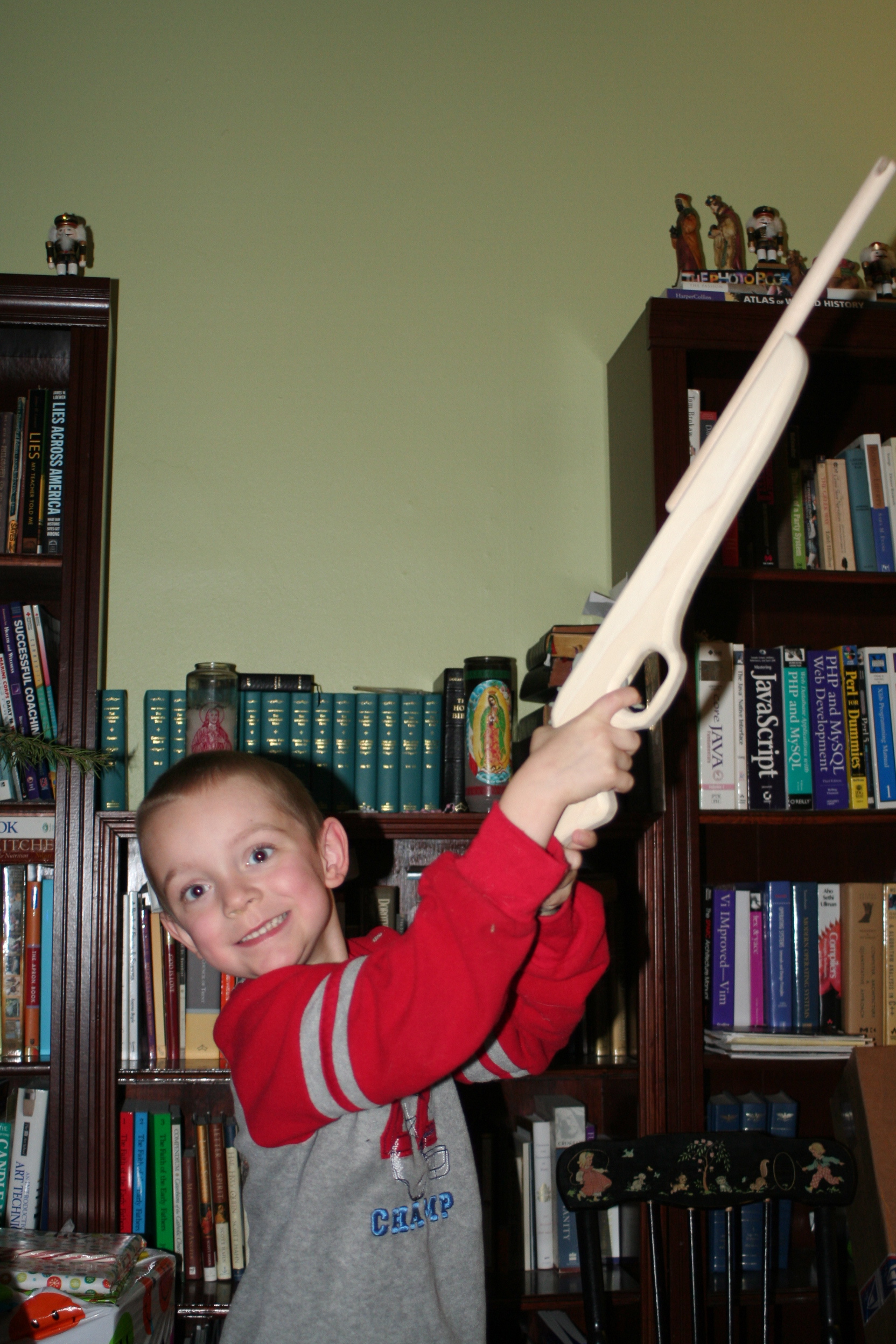 Like mother, like son. DON’T POINT THAT AT ANYONE’S FACE!!! (It’s a rubberband gun. So far, no ones gotten a real rifle.) 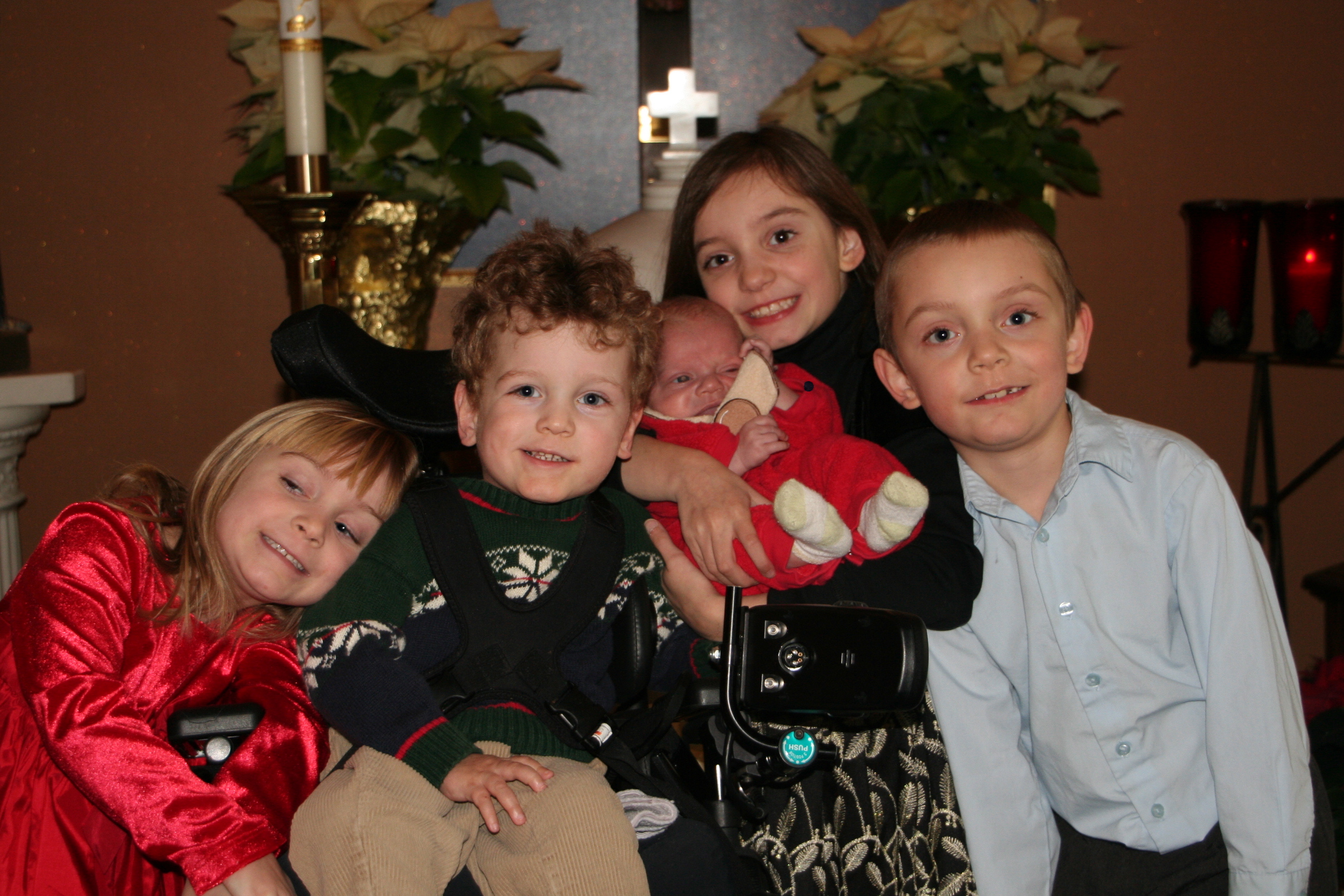 Here’s Teddy’s first Christmas, in which he wonders what he did to deserve such treatment.

What are some of your favorite Christmas memories or favorite gifts from the past? Be sure to share in the comments below! Lastly, a very Merry Christmas from my whole family to yours!