Gifts For ALL the Men in Your Life: Even the Ones You Don’t Have

A couple weeks ago, I got an email from Man Crates asking, or practically begging me, to suggest some new gift ideas for men. If you’re not familiar with Man Crates:

We say ‘no’ to ugly neckties, cologne samplers and executive trinkets. We don’t save wrapping paper, we don’t do ribbons.

We ship brag-worthy gifts for guys. Gifts that you can’t wait to arrive because you know the recipient will love opening them.

Gifts that people gather round at the office, people following the sounds of wood being torn from wood by the included, laser-engraved crowbar.

We are Man Crates, and we deliver awesome gifts for men.

Pretty awesome right? I was flattered and got right to work creating several potential Man Crates for them. Some ideas were so obvious, I couldn’t believe they weren’t already offered. Others are perfect for attracting niche markets not currently on Man Crates radar. If you see something you like, be sure to comment to let Man Crates know, otherwise, your favorite crate might not be in production in time for Christmas.

First up, despite picturing a bearded lumberjack on their home page, they neither offer a crate for bearded guys OR lumberjacks. WTH Man Crates?? Let’s correct this blatant error shall we?

The Young and the Bearded by fatface78 featuring Kikkerland

We’ve got a hip t-shirt, a shower curtain for bearded inspiration, beard shampoo, beard oil, a beard trimmer and a beard comb. Plus, as a bonus, the first 50 orders should get this sweet can cozy to eliminate the smooth womanly face on their beer cans. 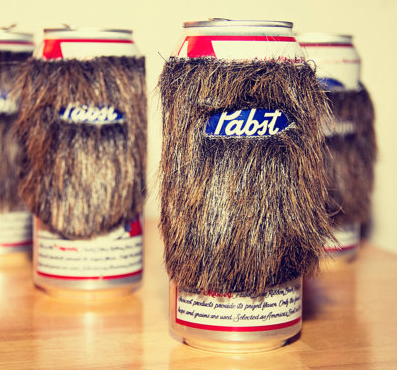 Then of course, the crate for lumberjacks.It’s got a cozy shirt, wool socks, fuzzy hat, tough boots, a flask to keep you warm and help your aim plus, an ax. And why not throw in a sapling too Man Crates?

Now, a unique crate based on my popular Lenten Gift Guide. For the man in your life who aspires to loftier goals, the Hermit Crate. It includes the deed for a cave along the rocky shores of Newfoundland, a basket for your followers to bring you bread, chains to wrap around your torso in reparation for the sins of mankind, rocks of assorted sizes for kneeling on, stuffing in your shoes, etc, and a hair shirt to keep lusty thoughts at bay. Emulate St. Benedict who was living like a recluse before it was cool. The original monastic hipster.

As a retired runner, I know there’s tons of extreme races out there with fire, electric jolts and lots of mud. Why not a Man Crate for the crazy…I mean dedicated fun runner? Featuring a crazy hat, first aid kit, nipple guards (if you don’t know, don’t ask), sturdy fire resistant shoes and a fun beer cozy for the after party, all you need to do is supply the entrance fee and life insurance policy.

Mud Run by fatface78 on Polyvore

Lastly, I tried decided to reach out to the country boys with a crate featuring only the most essential items for life in the country. A three pack of white undershirts, red Solo cups, a camo Snuggie, a behind the seat gun rack and chrome truck nutz lets the world know that you’ve got redneck class like a boss.

Redneck Gifts by fatface78 on Polyvore

I can’t even imagine the amount of marriages I’ve saved with these suggestions. Man Crates take note! And readers, be sure to check out Man Crates extensive selection of manly gifts. Even though I have a uterus, I’ll admit to eyeing up several of their meat based crates and would gladly take some jerky as payment for this gratuitous promotion. Think you have a better idea? Drop a comment like it’s hot, or keep it to yourself show off.