Hit the Beach and Avoid Sandwiches 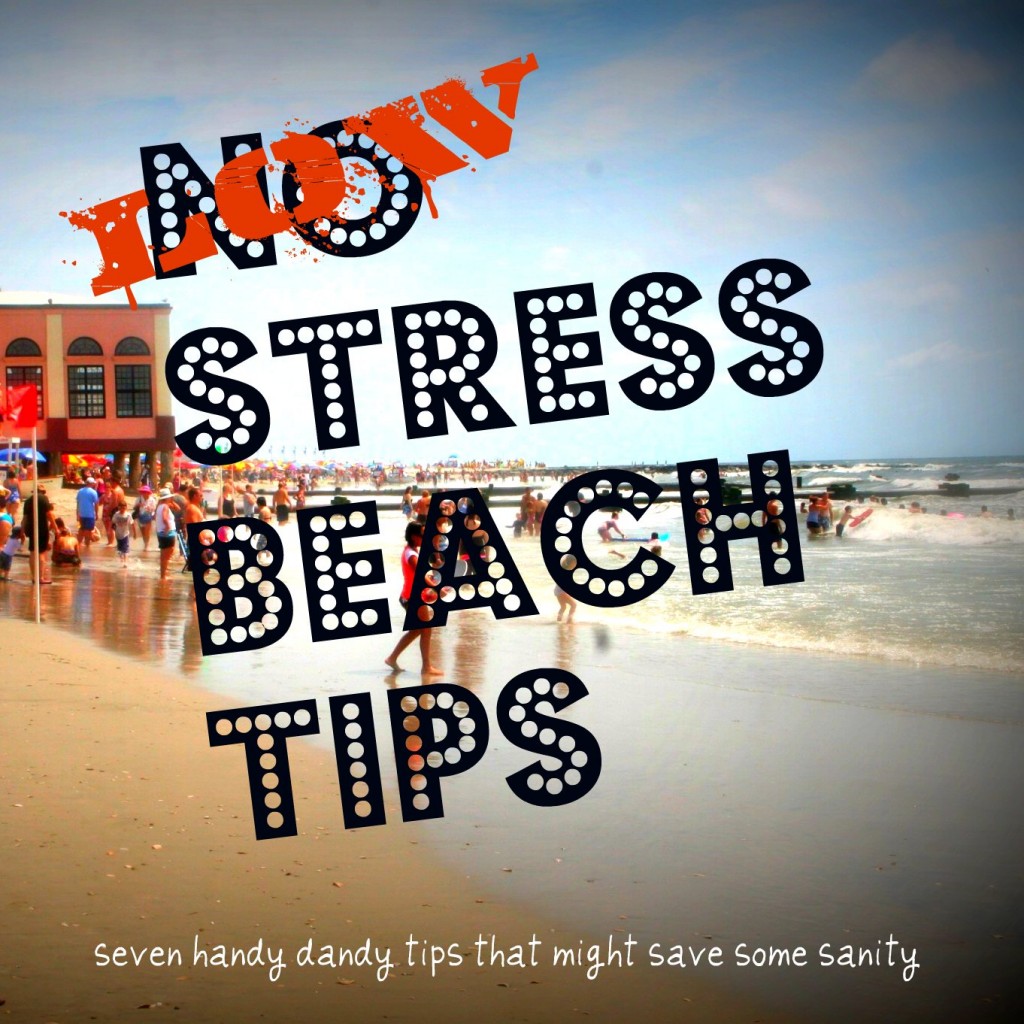 As you may have noticed if you’ve spent any time poking around my blog lately, I enjoy hauling my family to the beach. Despite all the sand, sun and sweat, I tend to have as much fun as the kids. My love affair with the beach goes back early in my childhood. I don’t think a summer has passed that I didn’t get in at least one day at the beach. I even converted my husband, who was not a beach goer growing up and whose fair skin made him shy away from prolonged outdoor exposure. (Now he’s matured into a beast of a man who jumps in the surf looking for a great white to wrestle. I’ll save that photo for a future post.)

So today, my Seven Quick Takes are 7 helpful tips I’ve learned to help make your day at the beach more fun and less “I have a ton of sand stuck in the crotch of my swimsuit!”

#1 Plan! Here’s a list to get your started.  I know, I know; a last-minute jaunt to the beach on a gorgeous day sounds so fun. Just toss everyone in the car on a whim and go. But without minimal planning you will wind up spending a ton of money on convenience food for children who will decide they don’t want it. Run out of milk or formula for a fussy baby. (Or try nursing with sand all over your boobs. Aaaa! Flashback; block it out, block it out!) Kites will break, shoes will get carried off in the tide and a sea-gull will poop on your head all because you didn’t plan. Just look over the list; keep it handy in the car or on your fridge. Don’t ruin a beach trip by lack of planning.

#2 Teach your kids to apply their own sunscreen BUT SUPERVISE THEM!!! Even Byron had to admit he looked like a clown after smearing sunscreen down each cheek and nowhere else on his face. I’m a huge proponent for making kids more independent but learning a new skill will take time. After a few visits, your kids will be pros and may even offer to slather up the baby if you’re lucky. Spray sunscreen can be helpful, but may go on too thin. I recommend sticks for their faces, which they rub in, and lotion for the rest of them. Sticks are great because nothing will drip in their eyes and cause pain with screams and wails leading to rubbing at their eyes with their sandy hands topped off by a frantic attempt at trying to wash everything off in salt water by which point I’m ready to just jump off the fishing pier.

#3 Save a lot of time on #2 by investing in rash guard shirts. Spend money on cool ones your kids will want to wear. Don’t buy your son a Justin Beiber rash guard on sale from the girls department at Wal-Mart and expect him to wear it. Make them happy because you will also save a TON of money on sunscreen. I love rash guards. If they made them for my kids heads I’d buy them so when they don’t apply the stick sunscreen properly, they don’t look ridiculous. I’ve seriously considered buying a swim burqa just to save on sunscreen. Okay not seriously but maybe after that one  bad beach trip when someone got sunscreen in their eyes.

#4 Pack extra towels. I know they can be bulky, but really, if you only take one per child I guarantee that upon arrival  at least three will be unrolled, dropped on the sand and then ran over by kids eyeballing the surf. Then they come back wet, sit on the towels and are all “Hey, I’m cold, give me a towel.” “You’re sitting on it.” “But now it’s all sandy! I can’t use that!!”

And if you’re lucky enough to have a baby that will sleep on the beach, you’ll need a clean towel for that, as well as a bunch of other random stuff that will inevitable come up once all five of your towels resemble crusty driftwood. Take extra towels and keep them hidden.

#5 Invest in a good umbrella or pop-up beach tent/ shelter. A weak one will blow away every time. Do you really want to be that poor gal chasing her beach umbrella that always blows three steps ahead of her two? And then yelling at your husband on how he should erect the umbrella this time before it blows into the ocean? No, just spend the money on the good umbrella. I t will allow you a place to lay a baby, and give everyone a break from the sun which means you can usually convince your family to stay longer!


#5 1/2 Towels, sunscreen, umbrellas – don’t  hesitate to make your kids haul them! Wagons and special carts are nice but who has room in their van for that? Beach toys for the sand or surf aren’t necessary and will wind up used for 1/4 of their time anyway. The rest of the time you’ll be stepping on half hidden toys and chasing after kick boards washing out with the tide. Pack only the essentials and put your kids to work hauling them.

#6 Wear the bathing suit that covers more. I’m not talking sunscreen here, though that’s another reason. You’ll never regret wearing the suit that provides more coverage. By comparison, you could very well regret wearing the string bikini top your toddler keeps untying, the over stretched two piece that keeps sliding down in the surf or the low-cut one piece that your milk heavy boobs keep spilling out of, much to the delight of the scary, hairy old man who camped uncomfortably close to your family. You’ll have a much easier time chasing kids, relaxing and riding in the surf if you’re not pulling spandex out of some sandy crevice every other minute. You’re not at the beach to pose, you’re there to have fun so dress for it! I don’t go into a bounce house in heels and I don’t go to the beach dressed for a nightclub.

#7 Last but not least-BABY POWDER! Did you know, if you sprinkle baby powder on a sandy part, the sand magically brushes off with the powder??!!! No access to a shower, no problem! Except for the sand caught in the neither regions of your suit, you can powder yourself off! Even if a wash off is available, I find baby powder to be the easiest way to clean off little ones who won’t go near a spray of water without sounding like they’re being abducted by a stranger.


So there you have it, seven tips, coupled with a planning list that help make our beach trips a little more seamless. If you hate the beach, and even if you don’t, be sure to check out the rest of the Seven Quick Takes over at Conversion Diary.