How To Dine Out With Small Children And Not Die

I know you’re all wondering how we’re weathering the insurance/nursing “snafu” but I don’t have much to report, except that no one is begging to pay for 35 hours a week of skilled nursing care in these parts. I will say the nursing agency called me and admitted the mistake was theirs, apologized and offered to help us in any way possible. I like it when people (or huge companies) own up to their mistakes. It’s one less person (company) I want to yell at right now.

Since several of our friends are battling storms of their own, a few of us decided to head out to dinner after Mass on Sunday for a “feel better feast” where we could drown our sorrow in good food, good drinks, loud conversation and hot fudge. Besides, our parish wrapped up 40 hours, it was the feast of St. Jerome and the day after the feast of St. Michael the Archangel. Nothing says “commemorating a feast day” like a spontaneous trip to Applebee’s.

The whole trip was worth it just to see the look on the hosts face when he asked “How many?” and we answered, “Six adults, twelve children please.” Thankfully, they had enough packs of cheap crayons to distract the kids for the two minutes it took me to order a jumbo sangria. (Which was mostly ice and fruit juice by the way. There’s a photo out there that makes it look like more of a party drink that it really was.)

And it was a good time. I was hesitant to go since Teddy was way overdo for a nap, and it was going to cost money I knew I’d want for an emergency pizza dinner later in the week, but I relented.

Based on this rare sighting of my whole family outside Mass, I thought I’d share some tips on what makes this sort of thing even possible without  tearing your garments, Biblical style, or numerous bribes (candy, a puppy, a new sibling, etc.) 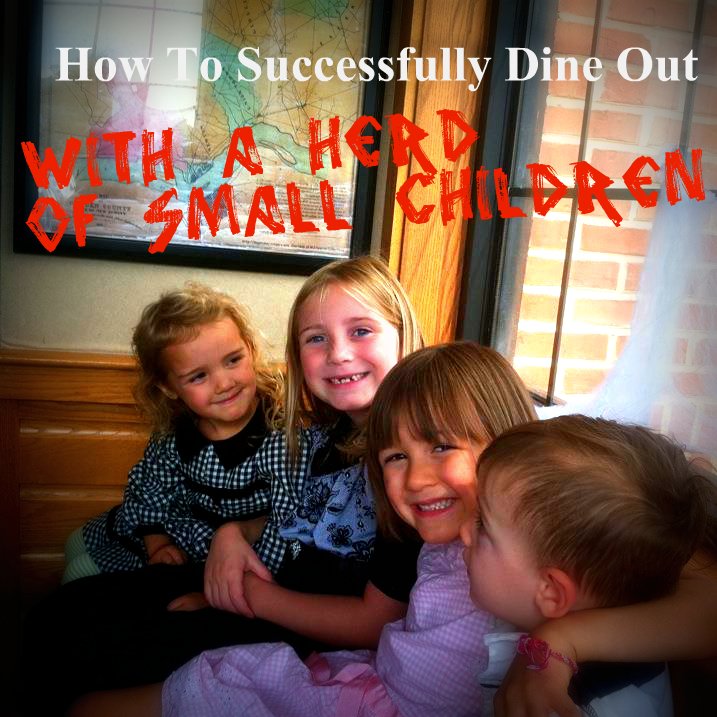 1. Go to a loud restaurant, preferably with TVs. When Teddy started screaming because he wanted to eat the ketchup (or dip dip as he calls it) right from the grubby Heinz container before we even ordered, no one cared because no one could hear him.  All the kids generally entertained themselves or watched the football games on around us. It didn’t matter if Addie and Byron were violently arguing over who would win in a fight to the death of team mascots; I couldn’t hear them. Ignorance is bliss!

2. Go at off-peak times. We took up a whole section and because not a lot of other people were coming in, they didn’t need to fill the seats right next to us. I think that helped when our kids decided to trot to the bathroom, walk down the length of the table to tell us the scores, or my trips down the table to remove any stray knives, etc. If it’s packed there’s more chance the waiter/waitress will be stressed by your party’s size and needs. And at peak meal times, you’re guaranteed seating near people who think a baby’s cry is their que to act like God Himself is punishing them. Keep rolling  your eyes lady; give me one more reason to pinch the baby.

3. Don’t eat out a lot, so when you do, it’s a big honking deal. My kids understand it’s a rare treat and if they muck it up, another year will pass before we go anywhere besides a rest stop on a family vacation. They act like royalty when we go out. I look like the best mom ever.

4. Don’t stress on the food. Let them get what they want, and if they don’t eat, take it home. Usually, because my kids want that scoop of restaurant vanilla ice cream or splat of pudding, they clean their plates. If not, I don’t argue with them. My food battles are not fought in public. But when tomorrows breakfast “magically” appears on the table in an Applebee’s doggie bag, it’s on.

5. Let your kid go to the bathroom him/herself. Statistically, the worst thing that could happen is he or she won’t wash his/her hands.

6.  See if you can get the kids food delivered first. I didn’t do this on Sunday, but typically I don’t want to see my husband’s pasta and my chicken delivered while being told, “The hot dogs are on the way.” What?! Are you trying to kill me? Guess who’s going to have to choke down that over boiled hotdog now that my toddler is screaming for food and all I have is crab alfredo and chicken Marsala?

6 1/2 . One thing that helps with this is figuring out what the kids are eating and drinking as soon as you’re seated, and placing that order, than taking your time with your own drink and dinner selection.

What tricks do you rely on to keep your kids happy in a restaurant? And if it’s crayons up the nose, please keep it to yourself.