I Borrowed Your Seven Quick Takes

I’ve been at a loss for what to write for a ‘Seven Quick Takes’ post for a couple of weeks now. No cohesive theme has jumped out at me and lately I feel like I’ve been summing up my weekly goings on with my ‘Pretty, Happy, Funny, Real’ posts on Thursdays. But everyone else around me seems to be full of creative stuff. How about a SQT listing my favorite links from the past week or so?? Done.

#1 I discovered a blessing of beer over at Catholic Drinkie. If you’ve read any of my recent posts you know we love to entertain and cold brewskies are usually on hand. We also can usually convince at least one priest to show up which means we’ve had our bonfires blessed, our parties sanctified and now we can add holy hops to the mix.

Bless, + O Lord, this creature beer, which thou hast deigned to produce from the fat of grain: that it may be a salutary remedy to the human race, and grant through the invocation of thy holy name; that, whoever shall drink it, may gain health in body and peace in soul. Through Christ our Lord.

#2 There was a love song link up over at Betty Beguiles which I meant to join, but didn’t so now I’m posting the one love song my husband and I have. I could list a ton of love songs I enjoy but Tony would disagree and we would fall into fighting over what constitutes “wuss rock.” At our wedding we danced to Mel Carter’s “Hold Me, Thrill Me, Kiss Me” and we still dance to this tune on our anniversary.

#3 Funny husbands who tolerate their funny wives blogging habits unite! Seriously, it seems that most of the great women I read have husbands whose humor usually warrants it’s own post or regular feature. Some start their own blogs. It just goes to show that behind every funny woman is a man who also loves to laugh, make fun of himself and won’t freak out over a mention or photo that shows him in a ridiculous light. Some great examples of ‘funny husband love’ this week were;

Cari @ Clan Donaldson managed to convince The Ken to answer her reader’s questions. Please visit and comment; Ken’s self-image, and Cari’s sanity, may depend on it.

Grace @ Camp Patton who despite being deprived of Twizzlers continually documents the sayings of her husband via Simon Says.

Dorian @ Scrutinies has designed a flow chart for her husband that I’m pretty sure Tony will laminate and hang on our fridge; because when he’s faced with a crazed wife in need of chocolate, he goes all deer in headlights.

#4 Speaking of love songs and husbands, but in a completely unrelated way, I love the new John Mayer album. It’s his best since Continuum. My husband keeps making vomiting noises when I play it. This from a man who loves Five for Fighting. If I wasn’t happily married, and John Mayer was a traditional Catholic and he cut his hair and didn’t say such stupid things to the media, I would totally be all over that. My favorite song thus far;

#5 This is an older post, but I’ve been looking for an oppourtunity to share it. Allison over at Totus Tuus shares her father’s observations on CNN’s reporting of a major news story. As a former journalist myself, I often get my panties in a bunch by the way the “unbiased” media covers a story. It amazes me that everything I learned in school is thrown out the window and I often pick apart new stories to my husband to show him how certain quotes are cut or placed low in the story or how unsubstantiated information, with no citations, are presented as facts.  It’s galling to me that most people allow the news to dictate to them what is going on in the world and they believe everything being stated at face value. However, bias works both ways, and I find the best thing to do is read about a subject across the board and I usually decide the facts lie somewhere in the middle. Now I’m stepping down off the soap box.

#6 A Shower of Roses posted fluffernutters with bacon. How did I not think of this before?? I am all out of GF bread so I’m thinking of just spooning the marshmallow fluff, peanut butter and bacon straight into my mouth and cutting out the middle man. 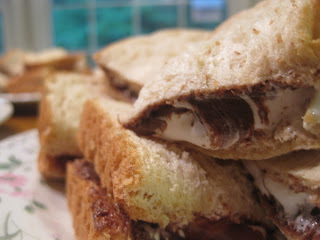 #7 Lastly a post on the controversial “Do you keep your screaming child in Mass or not?” conundrum.  My parish has a small number of vocal crotchety old folks who start shooting dagger eyes as soon as a family walks into the chapel. Thankfully, they are in the minority but most mom’s at my church have had a run in with one or two of them on a bad day. Meg from Pierced Hands makes an interesting observation as one distracted at Mass, but not in the way you’re thinking. The growing number of comments shows we’re long way  from reaching a consensus on the issue.

If this hasn’t been enough links to keep you busy, be sure to swing by Conversion Diary for the rest of the Seven Quick Takes.