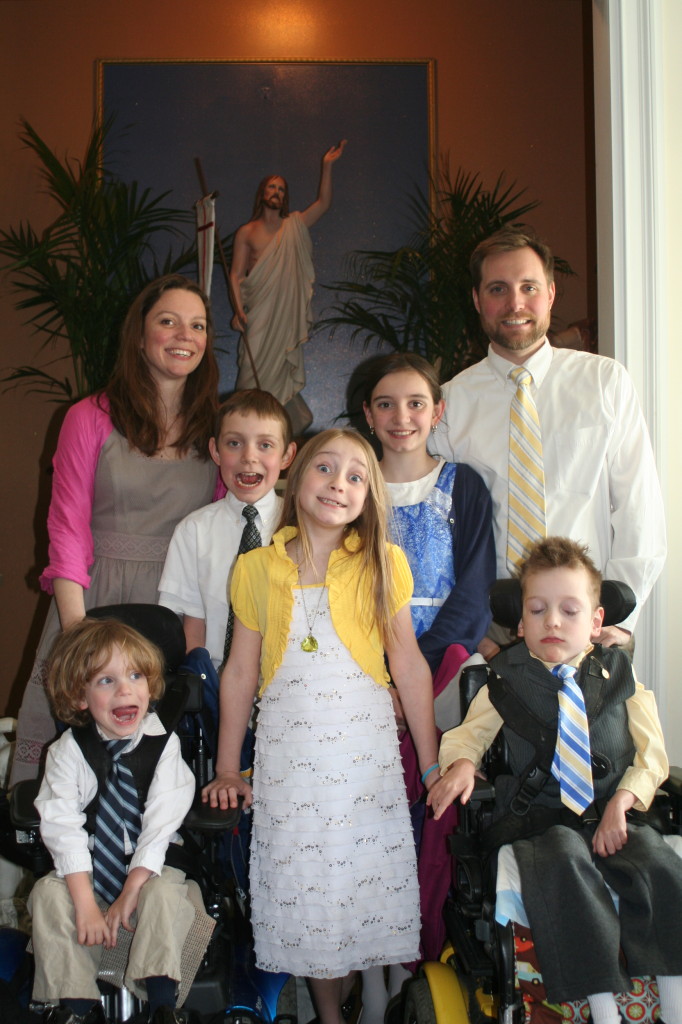 What a great looking family!

It’s weird for me to remember that there was a time, many years ago, when I thought I didn’t want kids. I mean, maybe one or two, but only after I’d been married several years and felt ready. When I started dating my husband eighteen years ago, I wasn’t seeking a husband or a new religion. I just thought, “He’s a fun, hunky guy I’d love to accompany to the senior prom.” Seventeen year old Kelly didn’t particularly like children; in fact, I don’t recall even being that great of a babysitter. I didn’t know anything about large families either, as no one in my family had more than three kids. Living in Lancaster, PA, the only large families I came across were Amish or Mennonite. I truly thought having a large family was something only for those old-timey religions that have given up so many other modern conveniences.

But yet, here I am, married almost thirteen years with five wonderful children. I actually consider my family size small-ish, but I know from the gaping mouths and wide-eyed stares I get from strangers that five is considered a lot of kids by today’s standards. It’s hard to explain to the checkout lady that I don’t have all the patience in the world. It’s hard to explain to a world of “two and through” how great having a large family is. I know if I tried to go back seventeen years and explain it to myself, I wouldn’t believe myself capable of such a feat. However, being open to an undetermined number of children, rather than some ideal family size has been surprising to me for many reasons.

1. The more kids I’ve had, the more I realize I like children. Just because I wasn’t all googly-eyed about babies as a teenager hasn’t meant that I secretly wish all my kids would just grow up and start being more like rational adults. I honestly enjoy the company of my kids. Most kids are pretty fun to be around and the more time you spend with kids the more you realize that. 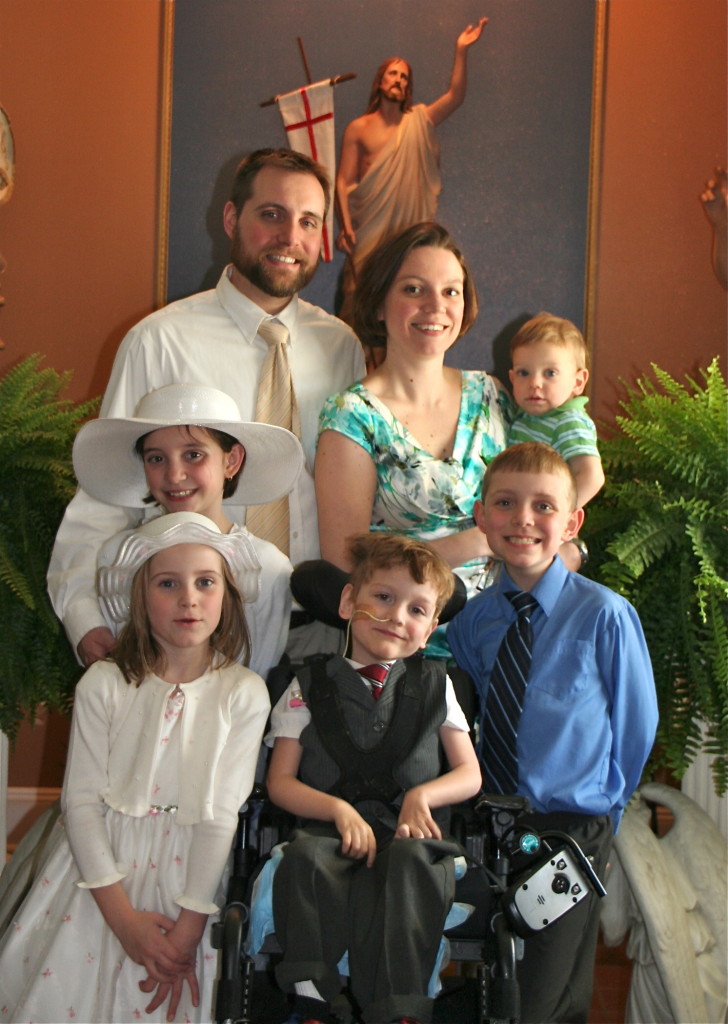 2. The more kids I have, the easier it gets. When all my children were little, it was an overwhelming time. But that stage is already gone and although two of my children will always be dependent on me, the older three do more and more for themselves, and for me. They play together and can assist their younger siblings. I think this is the most surprising fact that mainstream society just doesn’t grasp. I don’t have five kids hanging on me all day needing things. One child is hard, because you’re all they got. Throw several more siblings in the mix and they come to you less and less.  Discipline is key. I’ve learned to be consistent and have high expectations, and my kids are well behaved because of it. I wasn’t born a great parent, and I feel like I made a lot of mistakes in the early years, but having five kids has given me the experience to know how to raise them into pleasant people. Now the older kids hold the younger ones to these high standards as well.

3. My kids always want more siblings. This was the biggest surprise to me. I never asked for more siblings growing up. But my kids want an even larger family. They don’t see babies as time sucks on mom. They don’t get jealous. And when my kids talk about marriage, they talk about having large families of their own.  When I hear adults say they came from a large family and their parents didn’t have enough time and attention for them all, I do sympathize, but that’s a parenting issue. I know small families with children who felt unloved. Unfortunately, a lack of parental affection or attention is not a problem reserved for large families. Thankfully, I also know adults who grew up in large families who voice the same love of their families that I hope my kids will.

4. I don’t feel deprived by having a large family. Not at all. As a single income family in a state with a high cost of living, you can bet we make a lot of sacrifices. But never once have a thought, I wish we’d not had as many kids in order to have a larger home, new cars or easier time running them to soccer practice. Had we limited our family size because our goal was to have nice things and travel a lot, we would’ve missed out on so much . But this is another lesson it’s hard for society to understand. The greatest gift you can give your children isn’t a Disney World vacation, it’s a sibling. But don’t assume just because you have a large family you’ll never have nice things again. It may take longer to save or plan or whatever, but your children will still have great memories of their childhood, even with less stuff. In fact, you will discover that many of the best childhood memories don’t require new stuff at all. 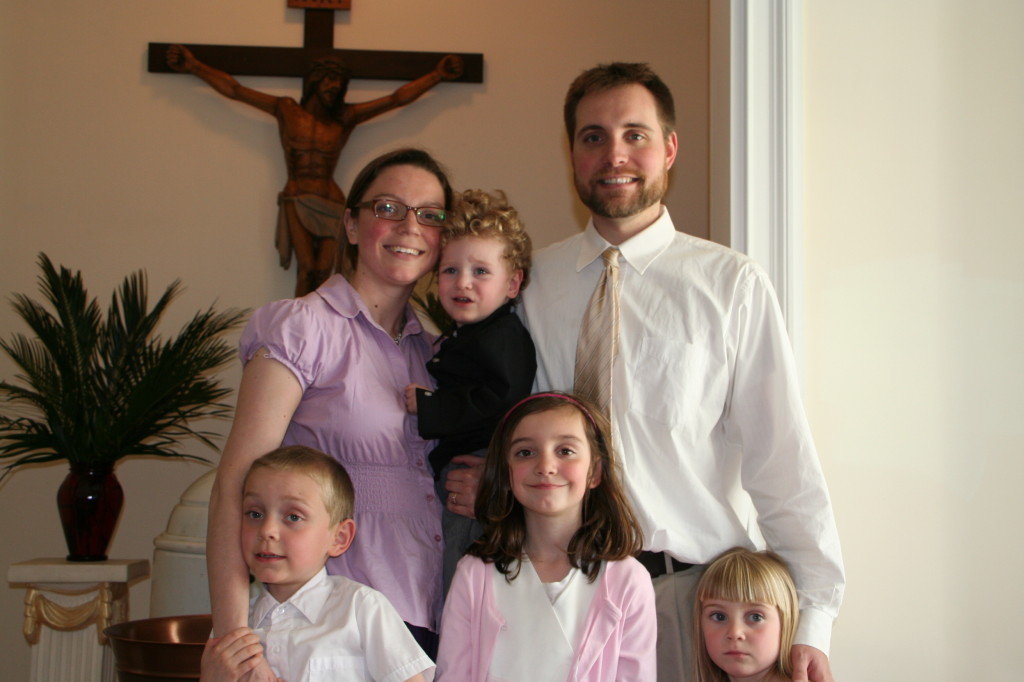 5. When two or more of my kids go somewhere, my house feels empty. Seriously, I feel like my house would be too quiet if I had any less than four children in it at any given point. Sometimes quiet is good, but the energy of having a house full of kids is contagious and infuses our home with youthful exuberance.As much as I joke about wanting to become an empty nester, I do enjoy the feeling of our home right now. It’s active, hands-on and not too fussy. It’s welcoming, open and a place to laugh and have fun. When I was younger, I wanted a nicely decorated home to show off. Now I realize my home is just a building and my kids are my trophies. Put them on the cover of Better Homes and Gardens!

6. Having a large family has made me a better person. Not just a better mom, but a better, more well-rounded person. You can’t be selfish with lots of kids. I mean, you can try, but you’re going to be very miserable. Parenthood demands self-control, humility and patience. I haven’t mastered them yet, but I’m continually working on it. I’m their first role model, and I strive to be a great one. I’ve been forced to admit to my bad habits and tendencies and root them out, lest I pass them on.  What other job demands such sacrifice? Is there a more demanding boss than a hungry infant, screaming toddler or sulking tween? You could not get me to work this hard for anyone but my children.

Seventeen year old me was wrong, and 35 year old me is glad I didn’t listen to her. The thought of a having a big family may be overwhelming but living in one is hardly ever that way. (And honestly, I found raising two little kids more overwhelming than five. So much anxiety comes from inexperience.) If God entrusts you with a large family, rest assured that you can handle it. You might be surprised at how much you actually enjoy it. 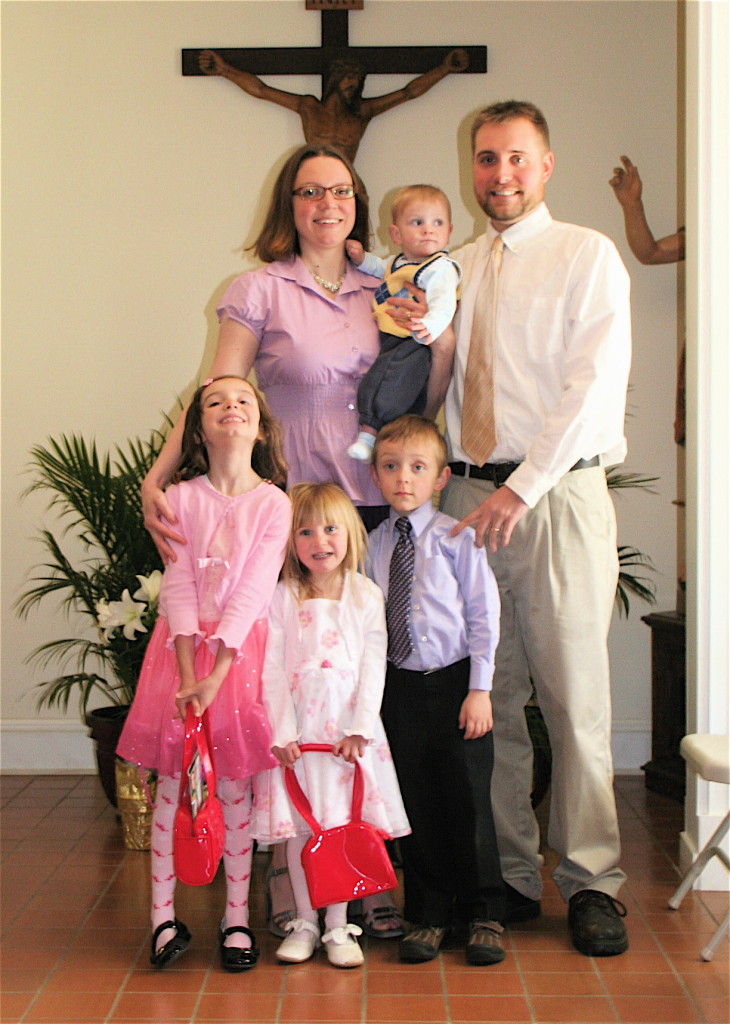