On Sunday, we heard my favorite Gospel story. It’s the miracle of Jesus turning the water into wine at the wedding feast at Cana. His first public miracle, done at the request of his mother. Ever time I hear the story, I glean something new from it. This year, I thought it was fitting that Kendra opened her miracles link-up on the same day and it caused me to reflect on miracles,  a topic with definite highs and lows for me.

Growing up, I believed miracles only happened in the bible. The parting of the Red Sea, the healing of the lepers, making the lame to walk: all those things were reserved for a time long, long ago. I didn’t hear stories of those things happening any more, and I just assumed miracles only happened at the hands of Jesus and the 12 apostles. Us modern folk were left to pray, and hope for the best. Certainly, I knew people who’d had their prayers answered, but the word miracle was never mentioned.

It was not until I started down the road to Catholicism that I read about miracles outside the first century. I was completely amazed. We have a small tri-fold pamphlet that lists the official miracles from Lourdes; tons and tons of miracles just from Lourdes. Do only Catholics receive miracles? I don’t think so, but I think we seem to see miracles where others see luck, chance or perfect timing. And because we see them,  and we know they’re happening today around us, miracles give us hope.

For four years I have been praying for a pretty big miracle. I’ve touched relics, oils, and statues to Fulton, and then Teddy and prayed as hard and deeply as any mother can. I’ve done pilgrimages, had Masses said, asked for prayers and got my sons blessed by bishops, and had our intentions taken to Rome and farther. And yet, not all prayers for a miracle happen, or at least not in the way we want. That is hard and it hurts. It’s easy to lose hope; to say, why them and not us? When years of effort still yield hardship and suffering for a loved on, it’s easy to want to stop praying. I’ve been there.

I’ve had to start appreciating the small miracles. In keeping my eye on the very dramatic “making the lame to walk and the blind to see”, I was overlooking the ways in which our prayers were being answered. Maybe it’s not as amazing as watching Lazarus stroll out of the tomb, but once I started thanking God for the little things I started regaining hope that He could and would help us through the big things.

Probably the best example I can give is of Teddy’s first year. We received his diagnosis  while he was still in the NICU after being born six weeks early due to my problems with hypertension. He had been so active in the womb and such a fighter in the NICU (he never needed breathing support) we were convinced he was SMA free. Once we had the diagnosis, our minds couldn’t help but go to Fulton’s first year. Fulton never sat for more than 30 seconds unassisted. He never crawled, stood or walked. He rolled for a bit, but lost some of that ability by his first birthday. The doctors said Teddy would present SMA the same as Fulton; maybe a little better, maybe a little worse. We mentally prepared ourselves for a year of missed milestones.

However, that’s not what happened. Teddy was a plump baby, where as Fulton always struggled to gain weight. Teddy rolled, scooted, crawled and stood when placed against the sofa. He could even pull himself up on a low stool or step. When adjusted for his prematurity, Teddy met all his milestones that first year. People told me maybe the doctors were wrong, and while I never doubted his diagnosis would finally catch up with him, I didn’t realize how that one normal year would be such a balm for my soul. 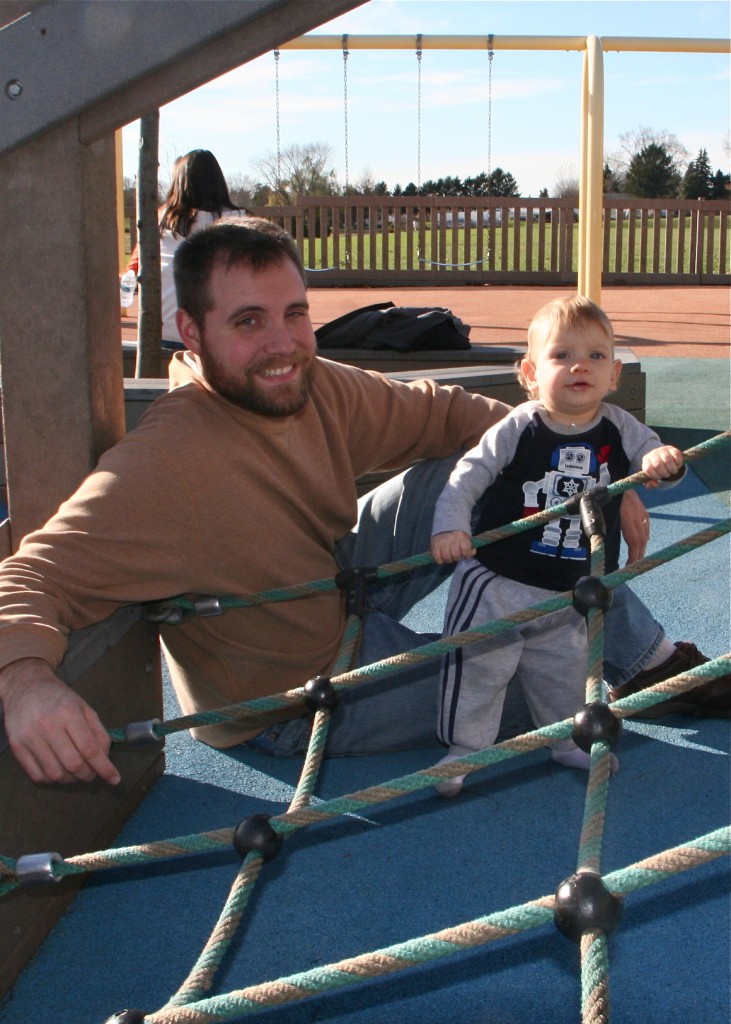 Teddy standing at around 12 months.

Our neuromuscular doctor couldn’t explain the discrepancy. SMA can manifest in so many ways, but amongst siblings there were very few cases he could think of in which one sibling was so much stronger than the other. I believe it was a miracle. Not the big miracle I wanted, but a miracle none the less, small and still pretty amazing and unexplainable. I started recognizing the small miracles more easily.

Luck? Chance? Hell no. Answers to prayer? Most definitely. Miraculous?

Yes, I believe so.

Don’t discount the little miracles. Pray for whatever great things you desire, but don’t ignore the answers you get just because they’re not what you expected.

“The most incredible thing about miracles is that they happen.” – G.K. Chesterton

Can these three, or four, miracles count as three reasons I love Catholicism? I hope so. Linking up with Micaela and Kendra. Be sure to visit them both for more reasons to love what our awesome Church teaches.