{MMD} Perspectives on Life and Love

Anne at Modern Mrs. Darcy is hosting a Perspectives on Life and Love blog carnival I couldn’t resist joining. Maybe the recent wedding put me in an extra sappy mood, or our approaching anniversary or it could be my attempt to make amends with the hubby for a recent post that doted on shirtless surf instructors. But whatever the motivation, I’m going to share my perspectives on my life, and the love in it then join up with everyone on MMD on Friday. Be sure to stop by Modern Mrs. Darcy and check out all the posts. 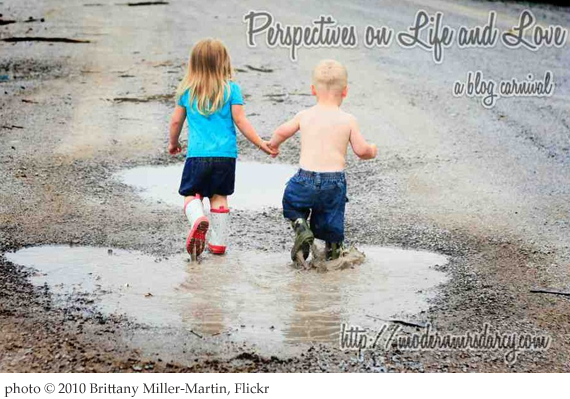 Somehow, I got lucky in love. Despite all my flaws, annoying habits and tendencies towards selfishness, sarcasm and cynicism, God introduced my future husband to me at the ripe old age of 17.

Yes, our’s is the clichéd high school romance tale with only a few minor twists and turns. He was the co-captain of the football and track teams. I was the art and drama student. I moonlighted as the school’s mascot, donning a foam comet head during half time. Yet we became friends, hung out and amazingly enough, he said yes when I invited him to the senior prom.

We started college two hours from one another, but by graduation were on the same campus. Our relationship saved me from participation in the rampant hook up culture. I drew closer to the faith even as Tony pulled away from me. We broke up, admittedly because I’d become too clingy. However, during the separation I had an a-ha moment in which I realized my life would be fine if it went on without Tony as my partner. Although it was a relief to finally be comfortable with myself, it was also a relief when we reconciled.

We graduated, got jobs,  apartments, new friends and became engaged. I converted and we were married on October 13, 2001. We were each 23, the second couple in our close group of high school friends to marry (the Episcopal priest among us went first). Within a few months of walking down the aisle I was expecting our first child while trying to decorate our new house.

We jumped head first into the American dream. It was never how I planned things, even once I became Catholic. I still felt like a kid in many ways; way too young to be responsible with money, bills, credit cards, mortgages and now a tiny human being! But I never wished we did anything differently up to that point. Even once Addie arrived, I never thought “Wow, the days of hitting the bars four times in one week sure sound good now.” Tony and I didn’t mind that that phase of our lives was done.

I loved my husband immensely before marriage, and now marriage and raising a family together was adding a new layer of love to our relationship. There were the routines and habits that added familiarity and stability. There was also the changing, growing and maturing that we did alongside one another, giving support when needed and not letting each other give up in the face of challenges.

The first serious test to our marriage came after welcoming our oldest son into the world (only thirteen months after our daughter.) Within two weeks of his birth we moved and took over running a business. Our high hopes and grand ideas motivated us to persevere through sleepless nights, long commutes and hurried days that ran one into the other, convinced we were building something great for our family. After learning some life lessons the hard way, we ultimately and painfully realized we were wrong. We sold the business after two years and moved to N.J. laden with debt and expecting number three.

This first taste of trials and suffering stretched us to our limits but ultimately created a stronger bond between us. I thought surviving that ordeal had prepared us to handle anything. In hindsight, perhaps God was warming us up for what was to come.

Life passed peacefully for a few years while we paid off all our debts, joined a wonderful parish, made new friends, searched for a home and prepared for the arrival of number 4.

We moved a month after Fulton’s birth (I went into labor the night after closing) and settled into our new country life on an acre of land, surrounded by farms. And I really think that’s as calm as it ever got around here. Since then we’ve accepted our responsibilities as the parents of two children with Spinal Muscular Atropy on top of the usual stuff that comes with parenting and homeschooling three healthy children.

I do not think I could shoulder the crosses I do, had God not sent such a perfect husband my way. He gave us so much time to figure ourselves out, learn about life, deepen our faith, and build a rock solid commitment to each other as to be unshakeable in the face of tragedy and trials.

Despite marrying young, having a large family and staying at home, my life hardly resembles a 1950’s sitcom. Our choices have flown in the face of modern marriage norms, but despite it all, I’d never wish for any other life. (Except maybe one free of SMA.) We are fire-tested, proven and ready for whatever awaits us. Sometimes I worry, “Oh God, what do you have in store for us now?? I don’t understand why this is happening to us!” but with Him and Tony by side, experience shows, we will manage somehow and grow closer in the process.

I see unhappy marriages everywhere, the dire divorce statistics and I wonder why am I so blessed? How did I get so lucky as to have a marriage others look up to and admire?  I feel like I should have gleaned some insight from our experiences to share with other couples, but alas, all I can think of right now are the words hope and sacrifice. When two people lovingly and joyfully give all they have to one another without reserve, there is always hope for tomorrow. Our experience shows that even if your life is blessed with poverty, sickness or worse, it’s not the end of your marriage. God can bring good from all things if you let Him. We’re in it for the long haul. God doesn’t promise it will be easy, but with Tony by my side,  it doesn’t have to be hard.