My Buckets Overfloweth or A Gallagher Harvest

From our deck, we are able to look out across acres of protected farmland. It’s a wonderful view that lures us into thinking we’re back amongst the fields of Lancaster, minus the manure smell.

The family that farms the fields rotates crops and every year we anxiously wait to see what will spring up. This year migrant workers planted rows upon rows of tomatoes, cantaloupe and watermelon. We were pretty happy because we’re always invited to harvest some for ourselves, and our kids love melon; much more so than the hay the farmer planted last year.

From 7 a.m. to 7 p.m. the workers were out spraying, tending or harvesting the crops, and occasionally bringing cantaloupes the size of a beach ball to us as we sat on the deck. We recently noticed a drop in activity, but it was still a surprise when on Friday they walked to our house and announced the fields would all be plowed under the next day, and we were invited to harvest as much as we wanted before then.

They’d already stopped harvesting the tomatoes, and we’d been helping ourselves, but we hardly made a dent. I HATE processing tomatoes so, I’ll admit, I wasn’t going all gang busters picking ‘maters; just enough for salads, sandwiches plus a few to roast and freeze for later.

The hired workers had picked many of the ‘lopes, but many more laid ripening in the sun, while the watermelons had never been harvested. I can only guess that buyers weren’t paying enough to make it worth hiring the labor to collect the fruit.

Faced with so much free food that was otherwise going to be destroyed, something was stirred in all of us to try to save as much of the bounty as possible from the plow. Even my mother-in-law who hates the heat was out for hours picking plum tomatoes.

I turned to the one place I knew I could get help, trusty old Facebook, to drum up workers to bring in the harvest.  Within hours families were showing up and filling their vans with produce. Children ran through the fields, some hidden by weeds and tomato vines looking for the perfect specimen. Wagons and wheelbarrows were rolled and pushed by teams of little hands across the yard. Our deck was awash in reds, greens and smiling sweaty faces. My children especially were distraught at the thought of so much food going to waste, even though I can’t even tell you the last time one of them ate a tomato that wasn’t part of a pizza or dish of spaghetti. I think Addie would have hauled every watermelon in the field onto our deck if I didn’t finally stop her. 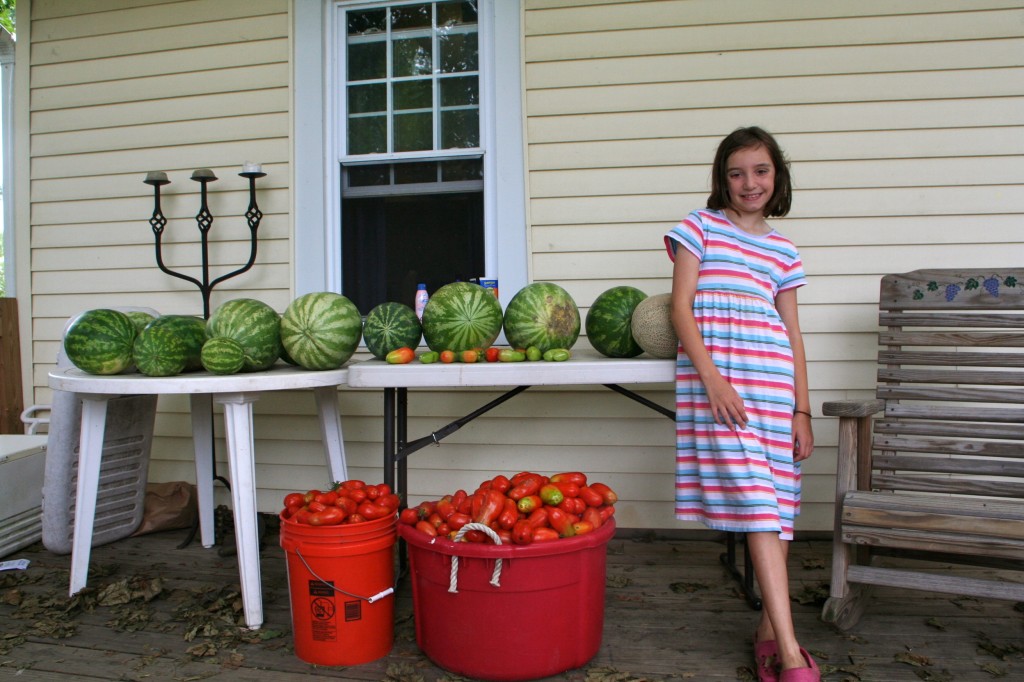 Not pictured; another garden cart full of watermelons they picked after I told them we had enough.

We gave away fruit after Mass, took bags of tomatoes with us to playdates and families shared with neighbors and coworkers. I’m trying really hard to process all the tomatoes. I could have enough tomatoes for the year, if I could just buckle down and do something with them. It was suggested to me that the pink flesh of the watermelons could be run through a food processor, frozen, and used for smoothies. I might also try making some popsicles with them so the kids can have local watermelon in January. That is, if I don’t fill them all with booze for an impromptu mom’s social. (The melons, not the kids.) Back to school with a bang!

Of course, in the excitement of the day, some of the watermelons got dropped and were cracked. Some were carried from the field and discovered to have rotten spots. I could have let the chickens, or the compost pile, consume these cast offs, however the sight of a large sledgehammer, a.k.a Sledge-O-Matic, sitting in our barn gave me other ideas.

Was I really the only unpopular teenage girl sitting at home on a Friday night watching old Gallagher movies on Comedy Central?

I did not have a hard time convincing my children on the awesomeness potential of smashing watermelons. I think they  were more surprised the idea came from me, and not their father. We placed several slightly rotten or under ripe melons near an old stump as the anticipation mounted.

I imagined video taping the whole family taking  swings, setting the movie to the 1812 overture, and creating a viral web sensation…..amongst my close family and friends.  However, the kids, impatient as always, smashed all the melons in my absence and much to my dismay, insisted it wasn’t that great. The melons didn’t explode or splatter as much as they hoped. “Anti-climatic” they said. What?!?!  Having watched the Sledge-O-Matic demonstration at least 100 times I knew they must have been doing something wrong. I sent them to collect me a new specimen so I could demonstrate proper technique.

Here is me, in a poor quality video, smashing a watermelon with a über heavy sledgehammer and creating  sizeable splatter. My spectators didn’t need plastic ponchos, but my legs were pretty sticky afterwards. Within five minutes, the chickens were all over this stump cleaning up the mess.

Despite almost dislocating my shoulders, I must admit I rather enjoyed demolishing a watermelon.  It’s a violent release that doesn’t scare anyone, cheaper than a massage and it’s sure to tone my biceps and triceps with regular repetitions. Alone time at the local bookstore might be nice, but can it top smashing a watermelon with a sledgehammer??? Hardly.

I’ve got a few extra melons and a Sledge-O-Matic ready if any stressed out moms need to stop by. The only catch is you’re required to take produce home. Shoot me an email to reserve your spot before the melons are gone!