No Addie, There Is Not A Santa Claus.

The other night, somewhere between Tony reading Sunday’s collect aloud and the beginning of our family rosary, Addie came to the sudden realization that Santa Claus does not exist.

Perhaps it was our discussion of presents, as we have several family birthdays approaching, or it might have been related to the fact I let slip that Papa and I always try to purchase thoughtful gifts for our children at Christmas. Whatever the reason, her rational mind (she is entering the logic stage you know) could no longer ignore the evidence against Santa existence.

The fact that she had to blurt out the assertion that “Santa isn’t real!” in front of three of her younger siblings, and then outline her case against the jolly old elf while we were kicking off the Glorious mysteries was inconvenient to say the least.

I don’t know whose eyes were bigger, Addie’s as she jumped on the couch, Byron who looked like a deer in headlights, Tony as he just kept trying to methodically move the prayers along or me as I hissed at her, “Shhhhhhh, shhhhhhhh! Not now! This has nothing to do with prayers! We’re praying!!We’re not talking about this now!!”

For someone who handled the menstruation talk like a pro, neither I, nor Addie were entirely comfortable discussing the Santa myth as I tucked her in that night. I kept thinking, “Can I somehow segway into ovulation?”, because things were going downhill fast.

Addie is almost ten. By last Christmas, I was beginning to wonder if I should let her in on the secret but I assumed she’d figure it out on her own soon enough. I just did not expect the lightbulb moment to hit at 8:23 p.m. on a muggy September night.

After making sure Edie was sound asleep in the bunk above, Addie grilled me with questions and poured out her heart. She has suspected for a while that Tony and I were Santa, but  she so wanted to believe, she ignored evidence to the contrary for some time. I was amazed at how betrayed she felt and how she thought Christmas would be ruined with her new knowledge.

“When I learned the Easter bunny was fake, it was no big deal. The Easter bunny is a freak, but Santa is huge. I’ve believed in him almost ten years; my whole life!” she whispered. “Finding out Santa isn’t real is like a nightmare.”

Who wants to believe in this freak?

So while I tried to ignore the melodramatics, I did want to reassure her that Saint Nicholas, is indeed a real saint in heaven on whose prayers we can always rely.

“But St. Nicholas still comes and fills our shoes right? He still does that? Even if Santa’s a fake????”, she exclaimed, looking at me with Bambi eyes.

“Honey, knowing what you know about Santa, what do you think?” She laid back on her pillow dejected. “So St. Nicholas is just a saint in heaven.”

Yes I admitted, we wrote the letters, we ate the food they left out, we bought all the gifts, even the special gift certificates that came a few years back from the North Pole. I tried to hype up the fact that she could now help wrap presents and set out gifts on Christmas Eve after Mass. It was dark in her room, but I’m pretty sure my offers got an eyeroll.

She wished we’d never told her about Santa and that shocked me the most. I asked her if she wished she’d never written the letters, set out cookies or tracked Santa on NORAD. I reminded her of how she wanted to believe and kept believing long after she admitted having suspicions. Would she want me to tell her younger siblings and take those things from them? She pondered it quietly for a moment and said No.  Despite being upset now, she didn’t want the other kids to lose their belief in Santa, or a St. Nicholas that fills shoes.  (How the two became separate entities I’m not sure. It’s something the children figured out on their own years ago.) 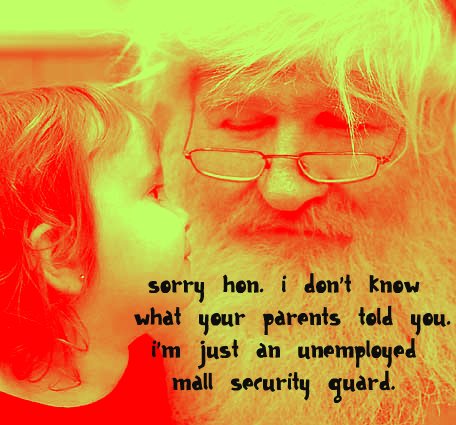 I suspect Byron knows Santa isn’t real, but he still wants to believe and has not mentioned Addie’s outburst as of yet. Edie seemed oblivious to the whole discussion. Either she doesn’t care one way or the other, or she believes Addie’s assertions are too preposterous to be true.  Tony, who was never a fan of the kids believing in Santa, is happy Addie discovered the truth on her own, but, I think, he is happy he can still write ridiculous letter from St. Nick to the kids, even if Addie is in on it.

Hopefully, for the sake of the young ‘ens, Addie can keep her thoughts to herself the next time the tooth fairy needs to pay our house a visit.

How does your family handle Santa Claus / St. Nicholas?