The Pope is coming to Philly for the World Meeting of Families in 2015! And I don’t mean to have any sway or insider knowledge, but, my birthday is September 26th and the Holy Father is expected to be here from Sept. 25 until the 27th. Coincidence? I think not.

Obviously, this means I’m going to be having the biggest, baddest (and I mean that in a holy way) birthday party with a few thousand of my closest Catholic friends on the Ben Franklin Parkway. I’m lining up a few port-o-pots and a shuttle service for our backyard after party.

I figured I should officially invite Pope Francis to my party, and welcome him to the Philly, South Jersey, SE PA area. And also give him a heads up that Jesus was just arrested in our neck of the woods, so he needs to maybe bring some Swiss Guards with him, just in case.

My name is Kelly Mantoan and my family and I are some of the millions of people excited to learn about your upcoming visit to Philadelphia for the World Meeting of Families in 2015. (You might remember me from such previous correspondences as “#freeFultonSheen @pontifex.”)

We are a family of seven; Anthony, my husband and our five children Adeline, Byron, Edith, Fulton and Theodore. Our Catholic faith is integral to our daily living and the cornerstone to our home education program.

Since you will be in town over my, and my oldest daughter’s, birthdays, we wanted to invite you back to our house for the ultimate after-party following your Saturday appearance. We will be stocking up on local foods and beverages (Tastykakes, Turkey Hill ice cream, cheese steaks, soft pretzels and Wawa hoagies) and providing security in the form of our 23 pound dog to ensure a good time is had by all. We’re also only a short drive to the beach, so if you want to make a side trip to Atlantic City or the more family friendly Ocean City, you can borrow our EZ Pass to zip through the tolls.

A few things to consider while visiting the city of brotherly love:
The Parking Commission will have no mercy, even on the Popemobile. You might find it easier to navigate around the Art Museum on a Segway. Just hold on to that zucchetto!
Saint John Neumann, a great American saint, founder of the Catholic School system and 40 hours devotion is interned at the National Shrine of St. John Neumann in the lower church of St. Peter the Apostle Church in North East Philly. He’s sort of a big deal.
The Children’s Hospital of Philadelphia is located in University City. It is one of the best hospitals in the country, if not the world, and consequently it’s walls are filled with some of the sickest children from across the globe. If you can make even a quick drive down Civic Center Boulevard  many of them will be able to look out their windows and see you. Having passed 13 long days in there with my son a few years back, I know how exciting a Papal envoy drive by (or visit??) would be for those families.
Also ironically, Jesus was recently arrested in LOVE park, so the authorities might not take to kindly to you ice skating or discussing your love of the Gospel. Enter at your own risk. 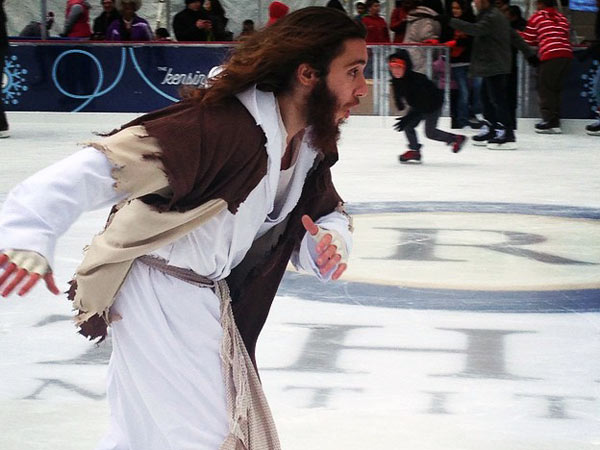 However, Philly Jesus is hoping to snag an epic selfie with you and catch a bite on South Street, which might be a safer meeting ground if you’re interested in a face to face.
You could also catch an American football game or baseball game while you’re in town. You might hear rumors about some of the fans, but I’m sure they’ll all be on their best behavior. It’s not soccer after all.

While driving through the city, why not try a playlist of local musicians like Will Smith, Patti LaBelle, Chubby Checker, Boys II Men, Billie Holiday and The Roots?

And despite New Jersey being the most densely populated state in the USA, you can still find plenty of produce being grown here in the Garden State. Try to get your hands on some Hammonton Blueberries, Jersey Peaches and apples before you leave the area. (Much of the produce is being tended and picked by Spanish speaking migrant workers who are filling the parishes in the Camden, NJ diocese.)

So, when you get a chance, drop me a line (or tweet at me, @kellymantoan) and let me know if I can expect papal representation at the un-official World Meeting of Families South Jersey birthday happy hour(s). I will fly in plenty of Malbec just in case Yards or Flying Fish in not your thing.

With warmest regards and prayers,