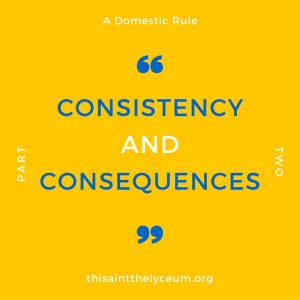 Find Part One, which explains our Domestic Rule HERE.

Once the rules were in place, I consistently enforced them (and still do, though with much less effort now). If I catch a child breaking a rule, I remind them of the rule or make them repeat it to me and then boom, punishment. I don’t discuss rules or fairness in the heat of the moment. Kids who argue get greater consequences. This is why casually discussing the rules often (at dinner, in the car, etc.) is so important. There is no shock or surprise when a consequence is doled out. Of course kids who don’t know what is expected of them argue and resist when they are corrected; how are they to know what behaviors are acceptable or not?

I don’t take sides in kids’ battles either. Two kids screaming? Usually there’s enough blame to go around and both are punished. It’s become known in our house that if Mama has to get involved, everyone will be unhappy. Consequently, the kids have learned to deal with most of their own problems.

Whether it’s a solo or group offense, if the kids want to plead their case later once everyone has cooled down, we can do that. Just as it is important for me to calmly enforce the rules, the kids have to learn to calmly plead their case against injustice. As they’ve aged we do discuss things after the fact. Sometimes they calm down and admit their error. Sometimes we disagree but they learn that regardless of their feelings on a particular matter, these are the rules and they have to obey them, trusting that as their parents we know what’s best for them. And sometimes, I even apologize if I was wrong. Did I yell and freak out too much? Was the punishment too severe for the offense? Then I admit my mistake and say sorry to my children. I’m not a perfect parent and my kids, more than anyone, understand that. Learn to apologize to your children. You are not always right.

It also helps that, from the beginning, my husband and I have always been on the same page in regards to the rules we set and their enforcement. We each expect the rules followed 100 percent of the time and enforce them equally. One of us isn’t the good guy, the other the bad. I’ve rarely used the “Wait until your Father gets home.” line because just me dealing with it is enough. If you stay at home with your kids, you must be in charge. Your kids mustn’t believe they can get away with murder until the other parent gets home. You’re putting your spouse in the difficult position of always having to be the bad guy, when, after a long day, he just wants to come home and enjoy time with his family. You’re also going to have a rough time if your spouse ever travels for business.

Bad behavior needs immediate consequences, and the child must know the reason for the consequence. If a punishment isn’t given until hours, or days, later, the child will not associate the discomfort of it with the original offending action. This is why my younger children often repeat back to me the rule he or she broke and how it was broken, followed by a punishment. There is a clear cause and effect relationship. Their actions have very real consequences.

We have used a variety of punishments through the years. There is no one sized fits all punishment. For major infractions like biting, I have used an open-handed swat to the bottom in addition to sending a child to bed. However for a couple of my children, swats equaled defiant laughter. For those children I have actually physically restrained them in my lap in a tight hug and not allowed them to go and play. In both cases, the punishment deterred the child from similar misdeeds in the future and just the threat would make them reconsider. I believe young children need punishments, not explanations. The time for explaining comes when they are older. (The Church sets the age of reason at around seven.) You may find my methods horrible, but I insist that you need to find punishments that work (sitting in a corner, sent to bed, only water to drink instead of juice, no screen time, writing sentences, loss of a favorite toy, privileges taken away, early bedtime) and you must enforce your rules constantly. As your children grow, you will continually have to revisit and revise the punishments you use.

If we experience a string of bad behavior it is usually a sign of something else at play in our home; lack of sleep, poor diet, mama’s having problems, over active schedule, or lack of consistency in enforcement. If nothing is working, step back and look at the big picture to see what outside forces could be sabotaging your discipline efforts.

I was asked if I give rewards for good behavior or use chores as a punishment in my house. The answer is no to both. I don’t believe in giving rewards. I did try it once, against my own good judgement, and sure enough, once the rewards were removed, so was any incentive. Children must learn internal motivation to follow rules rather than relying on external rewards. We also don’t give an allowance for chores or use chores for punishment. Chores are what family members do to keep a household running smoothly; we do them because they need done, not because we want to do them or because we’re paid to do them. If chores only got done when someone did something wrong, I think my kids would view chores in a negative way, and chores aren’t a bad thing. I do pay my children for extra work. Addie gets money for babysitting. Edie likes to give the boys their baths (they like it too) so we pay her for that. I will also pay for specific yard work; the kids have hauled stone, pulled out landscaping timbers and raked and hauled leaves to the compost pile. Meanwhile, sweeping the floor, carrying firewood, laundry, clearing the table, unloading the dishwasher; these are jobs that they do everyday because it benefits the family. The reward is having kids that are hard-working and self-sufficient, even if they can’t see the benefits in improving those virtues yet.

Lastly, all these rules and consequences are balanced with a healthy dose of love, undivided attention, physical affection and praise for many things, because a house of just rigid rules and discipline sounds as wonderful as a home of spoiled children. My husband and I also try to be joyful examples of  obedience and do what God asks of us without complaint. We admit when things are hard or when we’ve failed and we regularly seek the Sacraments to help us. We talk a lot with our kids, not just at them, and we try hard to really listen. In the end, creating and following this Domestic Rule has helped us become not our children’s friends, but hopefully the parents of happy and holy children.

Thanks for reading! Leave any questions below or send me an email at kellymantoan(at) gmail (dot) com.