A couple of weeks back I linked up with the lovely ladies at Like Mother, Like Daughter to share the joy of my daughter’s First Holy Communion, but also to put in a sincere prayer request.

Let me tell you, you guys and God were really working overtime, with some pretty amazing results. Please keep up the prayers, but know that the situation is getting better. Much better. And a special shout out to St. Rita, whose feast is today.

I was having a really hard time turning it over to God. I was stressed to the max and in physical pain. I was so tense and uptight, muscles and nerves were getting pinched and I was popping ibuprofen constantly just to get through each day. But by Tuesday morning, a weight was lifted and I woke up pain-free, energized, happy and unburdened by so much worry. I finally felt like it was going to be okay, after approximately two months of constant uncertainty.

In true Mantoan fashion, since it was sunny, we went to the beach. I know I’ve written about how difficult these trips are getting for me, but we’d been stuck at home so much lately, the kids needed the outing as much as I did. Plus, the older three agreed to make dinner once we got home. BONUS! I tacked on a trip to a seashell museum so it was an educational field trip too.

I was expecting a sunny, but cool, late spring day, but we were blessed with summer like temperatures. Lots of people were out and many Boardwalk stores were open. But it wasn’t so crowded that I had to worry about losing anyone in a crowd. 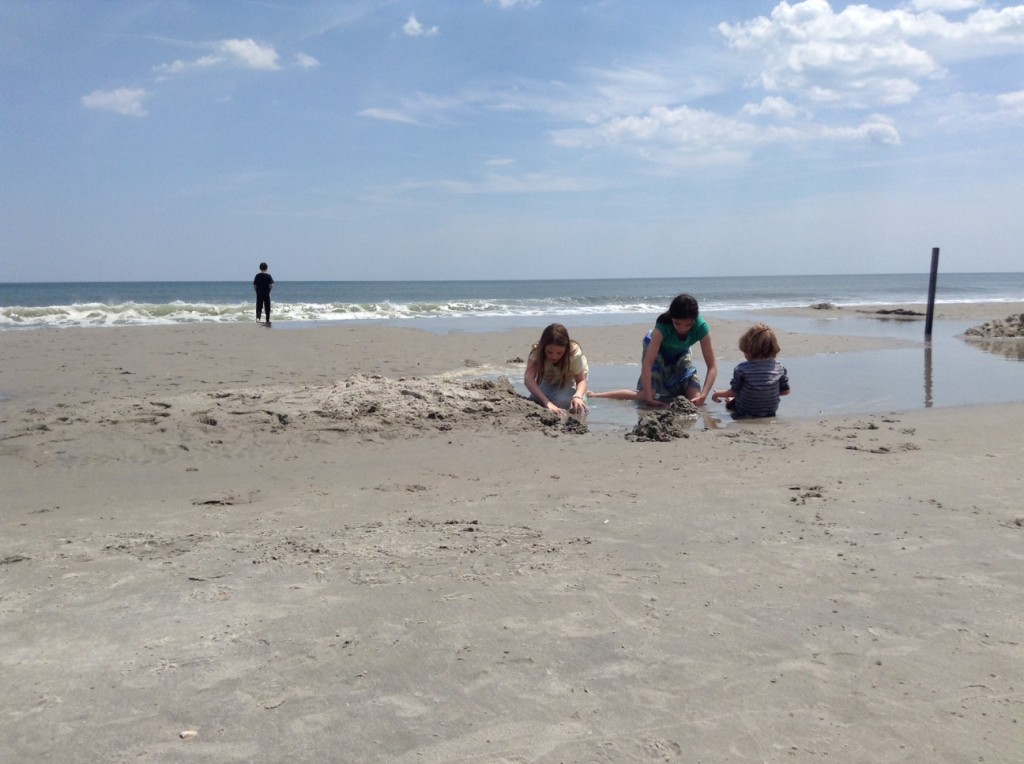 The kids, dressed in their normal clothes because I was NOT thinking clearly, jumped the waves, splashed in the tide pools, buried legs, built castles with complex drainage networks and generally made huge sandy messes of themselves. Thankfully I always carry a stick of sunscreen, so no noses were burnt in the process.

And yes, we visited the seashell museum. Here’s a “look nice!” shot. 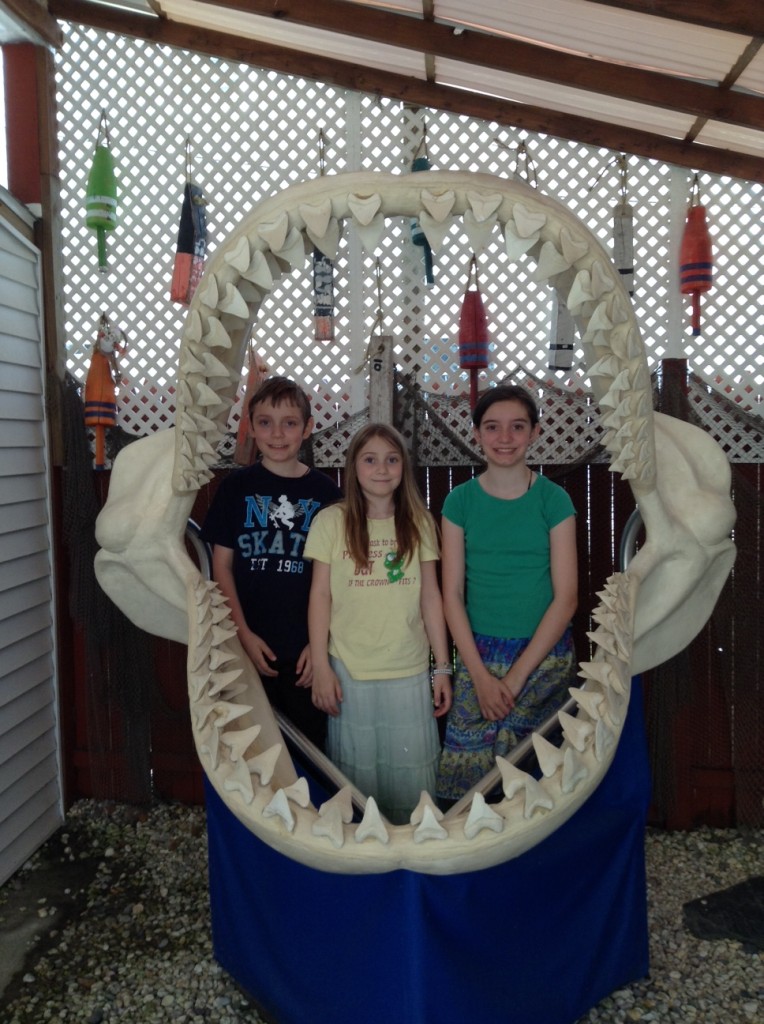 Here’s an “okay, now look like you’re being eaten by a shark” shot.

I’m still kicking myself because the museum (which was more a gift shop than anything else) had all sorts of unique items for sale that I didn’t even think to take pictures of. You’ll just have to image the shelf of baby sharks preserved in jars (which I told Fulton he could not buy), stuffed toads, gator heads, “lucky” gator feet, and stuffed blowfish with attached googly eyes.

Fulton did buy a large shell which spawned a fascinating lesson when we got home about what makes shells and how.Good thing I bought this seashore science book last year at the Outer Banks. So glad I could finally dust it off.

A week ago, I couldn’t have done this because of severe leg pain. (Sciatic? Hamstring? Still not sure.) Tuesday, I could help Fulton dip his toes, watch the waves and pick through sand clumps in search of creatures. I think this picture, captured by Addie, accurately portrays our moods. 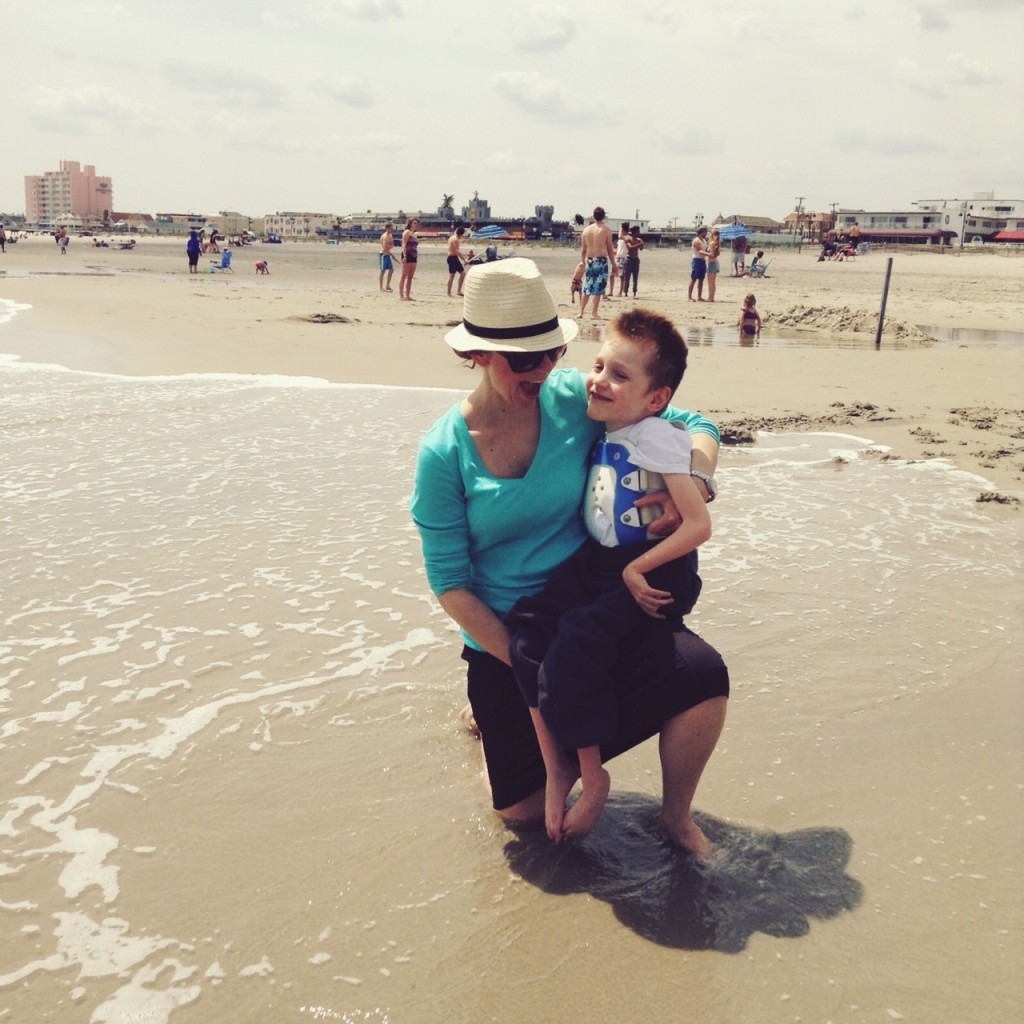 Of course, now all the kids are asking when we can go again, or buy our own beach house. I’m still trying to convince Tony that beach school is a viable option. Plus, I really need to snap some pictures of those gator heads and sharks in jars. Who wants to set up a “Move the Mantoans to the Beach” fund? Anyone, anyone….Bueller??

For more pictures capturing all that is beeeeuuuuuuteeefullll swing back to Like Mother, Like Daughter. Just be sure to visit me next Thursday when I’ll be writing about Leila’s new book ‘The Little Oratory’, how we do prayer in our home and A GIVEAWAY! (I’m trying to convince the family to do a rosary video, but as of yet, no one is on board with the idea.)