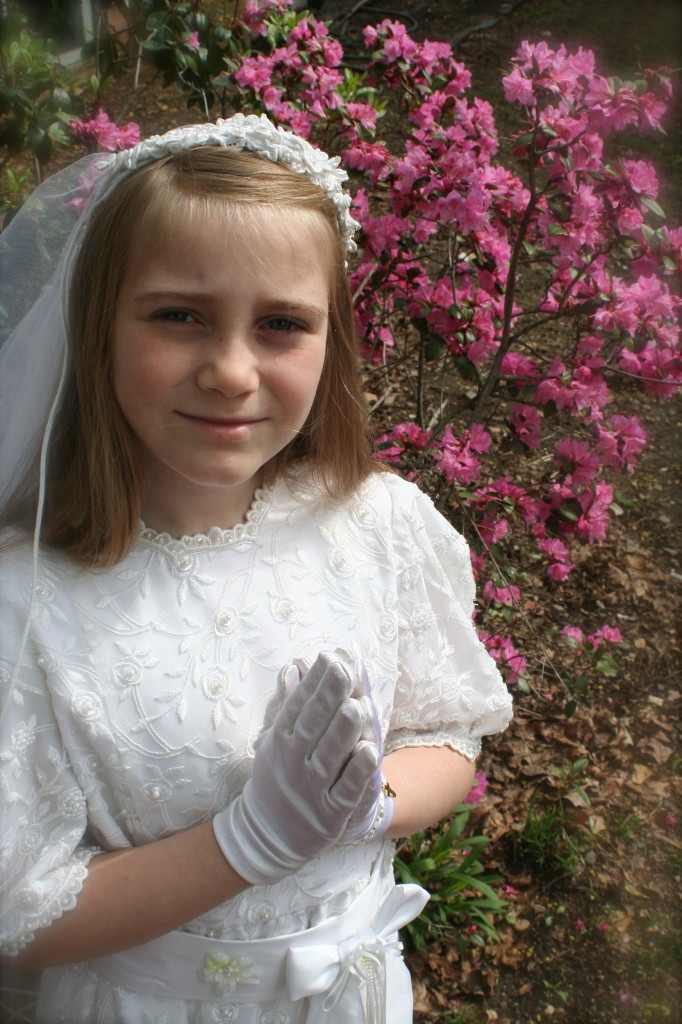 I didn’t forget all the hype I’d given this dress. I’ve got the pictures I promised, but not nearly as many as I anticipated. Thankfully, many other families were snapping shots during the ceremony and I’ve got a nice collection. Poor Edie the middle child. At least she was not deprived in the party department. From about 1 p.m. until 10:30 p.m. we had guests, the last to leave being my husband’s brother and family from VA whom we don’t see near enough. The weather was gorgeous and Edie was joyful the whole day. As a convert, I’m just so glad my children are being raised with all seven sacraments and are able to participate in the proper pomp and pageantry that accompanies them. 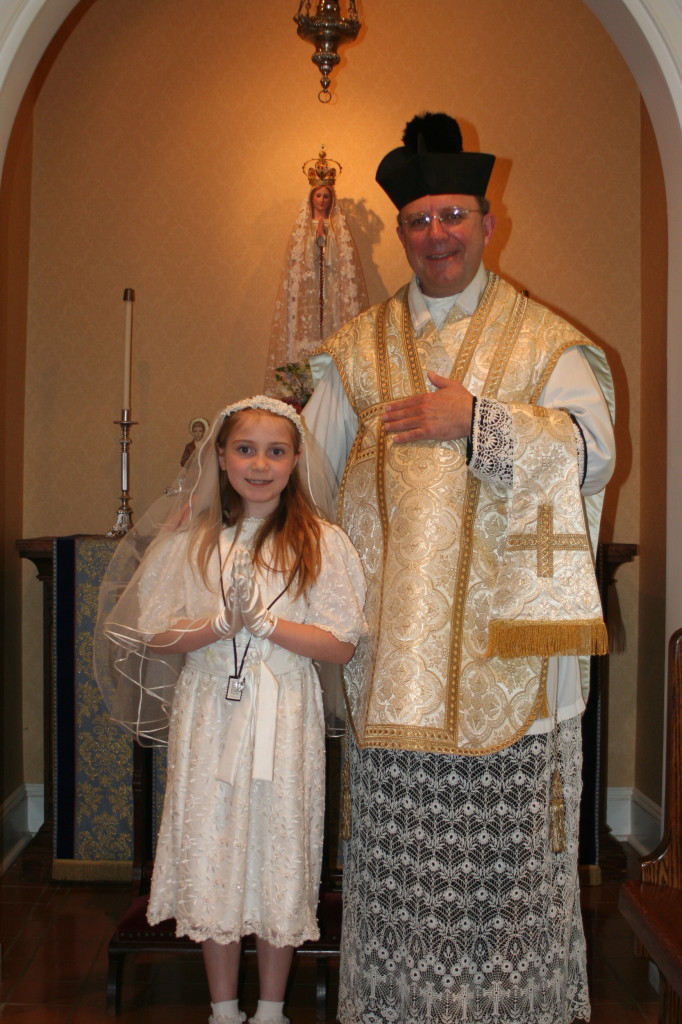 And then, just for comparison. 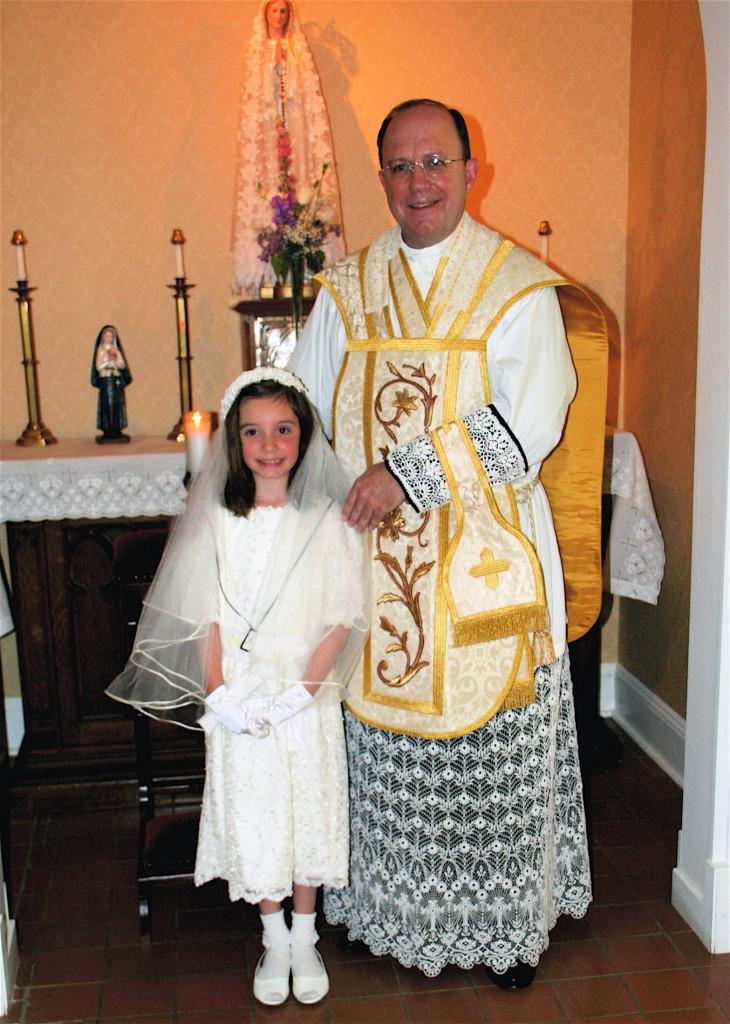 That’s my bridal veil too. I wish I could say I did the sewing, but Tony’s aunt, who is a very talented seamstress transformed my wedding dress using only Addie’s measurements and her imagination. How many women can say both their daughters wore her wedding dress??? I am very happy it was an idea they both jumped on board with and never once did either ask to shop for, or consider another dress. I wish I had a picture of me in my wedding dress easily accessible to show y’all for comparison, but that was in the film era and I haven’t had the chance to dig through my albums. Maybe I’ll update later today if I think of it.
I did wind up using Wite Out on a stubborn stain and no one would have noticed if I didn’t talk about it all day. Edie insisted she didn’t want a fancy hair-do which I fought for all of three seconds before realizing we didn’t have a ton of time to figure something out anyway. All I insisted on was pinning her hair back under the veil so I could see her face. She reluctantly agreed.

Because what’s one more living creature to raise? We got a dog! 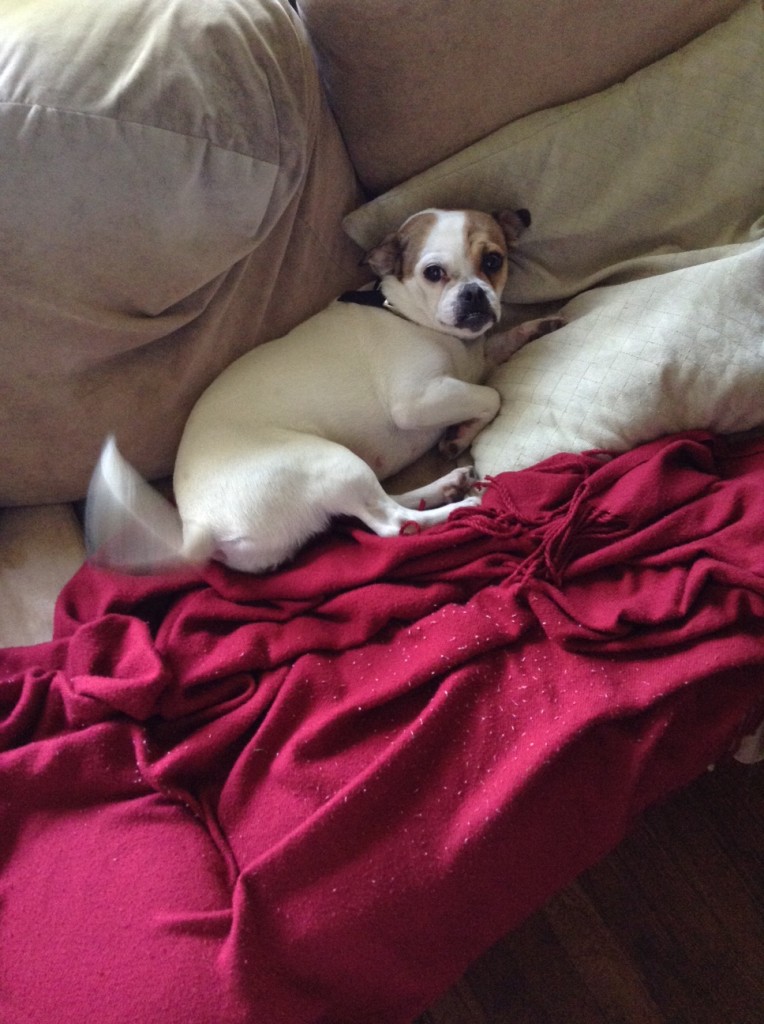 Her name is the Baroness Ginger Von Snappes, or just Ginger for short. She’s a stray that showed up outside my husband’s office more than a week ago with no tags. Tony’s coworkers had her checked for a microchip, called area shelters, put up fliers with no luck. She is so well-behaved, already house broken and so friendly we think she must have had owners but, since they hadn’t turned up, she was set to go to the shelter when we decided to take her in. The kids know her owners might still turn up, but for now, we’re loving owning a dog again. She’s got the body of a terrier and the face of an English Bulldog. She snorts and makes all sorts of funny noises, but for now it’s endearing and not annoying. 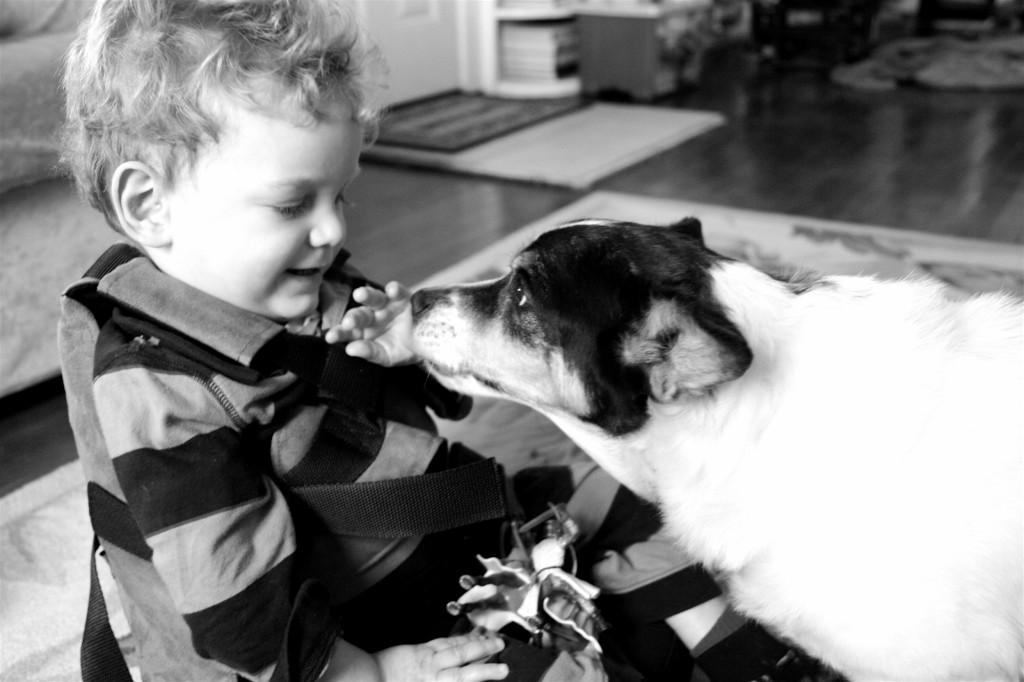 I always had dogs growing up and when I got my first apartment in 2000 one of the first things I did was get a dog. His name was Darwin and he stuck with me through marriage, four kids and four moves before we had to put him to sleep in 2010. He was so great with the kids, and such a loyal companion I was convinced we’d never find another dog like him.  I knew we did not have the time to train a puppy and with all the kids, a cat, a flock of chickens, wheelchairs speeding around; I didn’t know if the time would ever be right to adopt again. In fact Darwin was so mellow, my kids typically did not like other dogs because so many barked or jumped. I didn’t know if my kids would ever want a dog. But, the stars aligned and four years had made a big difference. For now, they are happy walking her and adore her company. Given Ginger’s disposition and with the burden of training gone, I’m able to focus on doing what I need to without worrying about her peeing in the house, chewing up shoes or attacking Fulton as he lies on the mat.

So now we’re buying dog stuff again and the first thing my husband picks out? 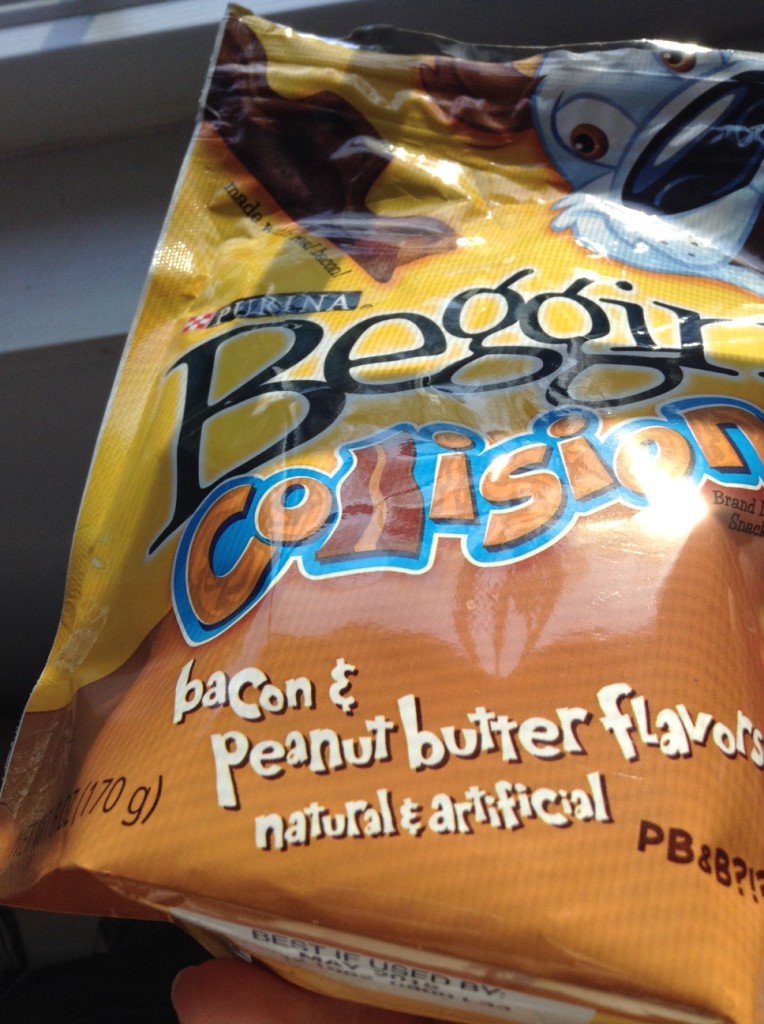 In theory, I would eat these, however, the Baroness was not impressed.

This past week I stepped away from the computer to deal with a very serious family emergency. While it is not something I will write about on the blog, I will clarify that the seven members in our family are fine. I also implore your prayers regarding this special intention. You can take it to St. Dympthna or St. Rita if you’re so inclined as they’re quite familiar with it. Thank you.

For more pictures that span the chasms between all that is {pretty, happy, funny, & real},  journey back to Like Mother, Like Daughter.