#popeinphilly Spending my Birthday With the Supreme Pontiff

My apologies to anyone who wanted a timely article on my time in Philly for the Papal visit. Another reminder as to why I love blogging vs. working for a “real” media outlet; I set the deadlines.

To answer the question at the forefront of your minds, yes, I did see the Pope. But now, to backtrack to 7 a.m. Saturday morning (my 37th birthday) when the day’s journey began on an empty train in Atlantic City.

Yes, EMPTY save for me and two other riders in my car. I believe a handful of other folks were scattered amongst the other cars, but leaving at dawn was definitely a smart move on my part.

I arrived at 30th St. Station in Philly after 8 a.m. and started walking towards the “secure area” where the morning Mass, Papal parade and Festival of Families was to take place. The Pope also spoke at Independence Hall, but that event was only open to ticket holders, and press with a specific event credential so I didn’t bother heading into Old City at all. 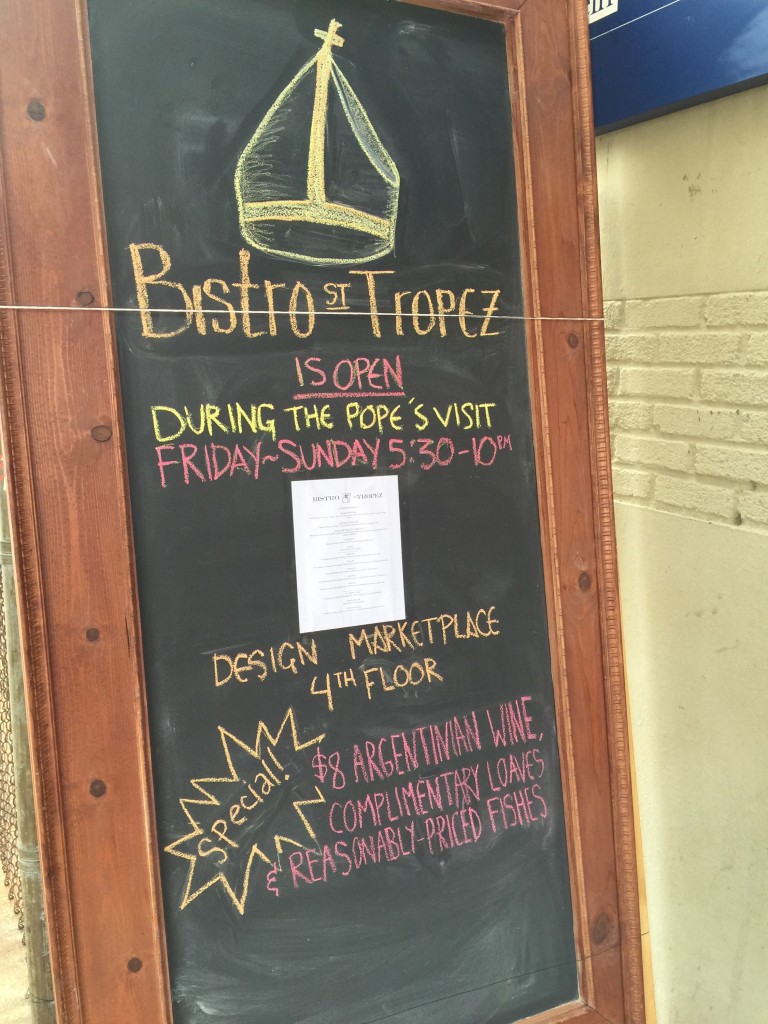 I took this picture because of the last line. HA!

I had no trouble getting through security, the first time. However, once inside the secure area it was very difficult to get around. Crossing the street was sometimes impossible. As I made my way to the press center at the Convention Center I had to leave the secure area. At the press center I watched the Pope’s plane land and I became a puddle of tears as I watched him stop his car, get out and kiss a boy in a wheelchair with Cerebral Palsy who was at the airport. SOB-BING.

I texted back and forth with other friends on the ground and quickly realized that it was not likely I was going to run into any of them. Having never been to an event of this magnitude I completely underestimated the size of the crowds and the ease to which I would move through them to find people. I had worn nice bright colors, but without a flare gun, I doubt I could’ve located anyone once I hit the parkway.

From the press center, I went back through security a second time (taking a little longer: crowds were getting bigger) and went over to the Basilica to see if I could catch a glimpse of the Pope as he left Mass. I had to settle for a spot on the side of the church, and from there I chatted with a man originally from Iraq who is now a deacon in Detroit. We talked about ISIS and he told me how the Church where he is from is completely gone and wiped out. We discussed refugees and other current events before he moved further in the crowd with his family.

I enjoyed several moments like this through out my day; just casual conversations with Catholics from all over the country, and globe, that really put into perspective how large and truely universal our Church is. But yet, this ephiphany was gained through numerous small, intimate moments that also reveal the power of God working through each and every member at any given time.

After Mass, the Pope actually sneaked out a back door and drove to St. Charles Borromeo Seminary, much to the surprise of the crowd and the media who had their cameras firmly fixed on the front of the church. I did get a glimpse of the police commissioner and the mayor (whose hybrid car battery was dead) but that was hardly what I’d been standing around for.

I walked over to Love Park for some over priced lunch, a quick Periscope update and I ultimately purchased a CD of Catholic electronic music from the ‘Priests of the Beat.’ I mean, how could I not???

Then I decided to give myself plenty of time to get back to the Convention Center where I was supposed to chat with Jennifer Fulwiler on her radio show at 3 p.m. And good thing I did because since my first walk from the Center in the a.m. more streets had been closed to pedestrians crossing and i was forced to walk five blocks out of my way to get across the street. I arrived soaked with sweat, but with time to cool off and check social media which was now reporting lines of up to three hours long to make it through security check points. I knew the return trip would not be easy and without a special media pass to the Festival of Families I couldn’t take the media shuttle and bypass the security lines.

I jumped on the air after a break and chatted for a segment with Jen, and Father Kevin Gabriel Gillen OP on Pope Radio about my experiences at the World Meeting, the Pope’s continuing message about the importance of life at all stages and my joy at seeing his efforts to frequently bring attention to the sick and handicap that come out to see him.

I always get nervous on the radio, but I don’t think I said ‘uh’ too many times. After one more potty break, I checked my map and headed out to a far security checkpoint leading into the ticketed area of the Parkway for the Festival of Families.Although I didn’t have a media pass to the Festival, a good friend in the Philly diocese did snag me a ticket so my goal was to work my way up as close as I could to the stage.

Many, many blocks and a 7-11 stop later, I arrived at a security checkpoint with a short line! It was a Papal visit miracle! I got through and while all the seats against the fencing were taken, I snagged a spot against a tree with a view of a jumbo screen, the stage and parade route. I relaxed and settled in for a long wait as Andrea Bocelli warmed up on the concert stage. He sounded great, even during a sound check.

After a bit, I noticed a middle-aged man leaning precariously against a water bottle refill station right next to me. I quickly stepped over and caught him just as he prepared to pass out. I motioned for someone nearby to bring over a police office while I asked the man if he was alright. Before I knew what was happening, a priest in a long black cassock with hood came over and was yelling at the man in my arms.

Needless to say, the man sat in a chair and I quietly backed away wondering what kind of order this priest was from. Seemed like one of the ‘flipping table in the temple’ variety. As the police gathered around and called in a medical team I heard George insist he was fine and that he wasn’t going anywhere; he was going to see the Pope! I quickly learned that the priest was actually George’s brother, who had tried to persuade George to rest several times on their walk to the festival site with no success.

The medics didn’t believe George was having a heart issue or stroke but advised his brother to keep an eye on him. As George drank water and started feeling better, both men came over, thanked me and we made small talk.

Fast forward 30 minutes later when I see George looking woozy by the water refill station again with no one else around to catch him. Thankfully, he had the sense to find a chair and sit down and as his brother made his way back to where George sat, he gave me this look like “Seriously???” And all I could say was, “I don’t want to catch him again!”

Performances began around 6:30 p.m., with no indication that the Pope-mobile would be coming by any time soon. The wind picked up, temperatures dropped and I refreshed social media about a million times to whittle away the minutes.

Finally on the opposite side of the parkway, a loud cheer erupted as flashing lights indicated the Pope had arrived! Illuminated on all sides, the Pope-mobile took off south down the parkway and we wanted for him to circle around and pass us.

Originally, I thought my spot would give me a good view, however, once children were hoisted on shoulders and cameras raised, I realized I might not see much at all so I moved forward in the hopes to get a better view. Several times people started cheering only to discover it wasn’t the Pope-mobile yet. (If you were trying to follow me on Periscope, you’d notice the two false alarm broadcasts.) Finally, the it was the real deal and the Pope-mobile passed by! It was hard to see him, and he went by very fast. There was no stopping and kissing babies by this point. (Some people have all the luck!) I watched him pass and recorded it on my phone at arms length above my head, but the evenings darkness rendered any image a blurry white blob. But no matter! It’s the view you get when you don’t camp out for 10 hours and I was satisfied. 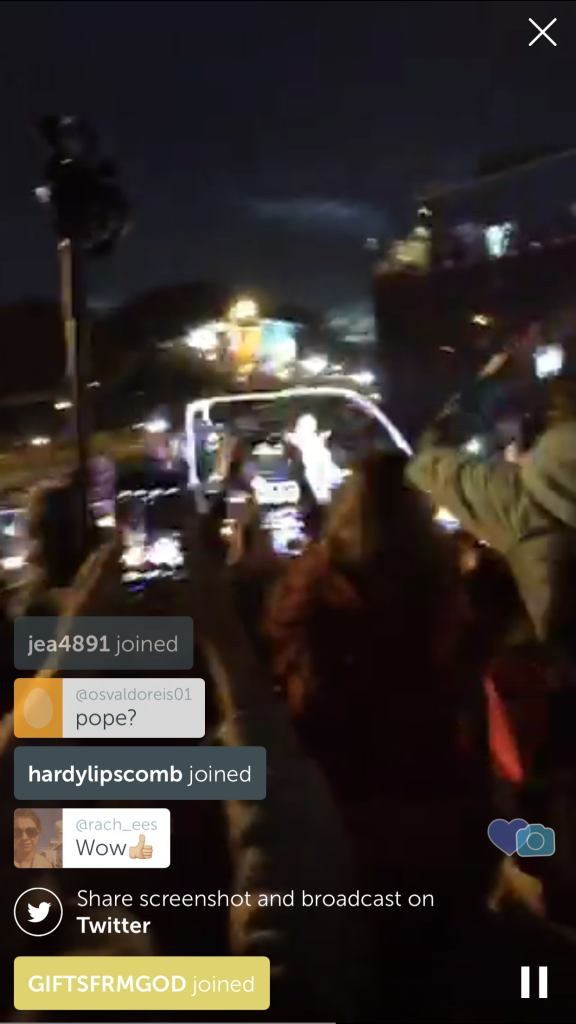 That white blurry blob is our Pope!

Once he took the stage I realized the vantage point I had secured, while allowing me a view of the center of the stage, did not give me a clear view of the right side where the Pope was actually sitting. I was also at a bad spot to pick up sound from the speakers, so I couldn’t understand most of what Marky Mark was saying. After 12 hours, I was feeling done and desperately wanted to spend the remainder of my time in Philly with friends, sharing drinks and celebrating my birthday. Thankfully, my birthday wish came true and by 8:30, I was sitting at a bar on Broad St., sharing laughs and drinks while watching the Pope on TV. It was a great way to end my day…..right up until 11:30 p.m. when I realized I had to catch a train out of Philly before midnight. Cue quick good byes and hurried walking across the city as I raced to 30th St. Station in the hopes of catching my train.

I was successful and within only a few minutes of sitting down in another empty train, I was on my way back to Atlantic City. Tired, slightly tipsy and with a growing blister on my foot, but oh so happy!

So too many words later, that’s my day in a nutshell….a very, very large nutshell. If I think of anything else, I’ll probably come back and add it in as I plan on having this one post be a journal entry of my day.

For more pictures and lots of short video clips, visit me on Instagram.

For more reflections on the Pope’s visit, visit These Walls for ‘A Walk in Words with Pope Francis.’