Pumpkin Guts and Spice and Everything Nice I’m linking up with lots o’ lovely ladies today to share some of my favorite fall decorations. Namely, pumpkins or jack o’ lanterns. Growing up, my parents were never keen to carve pumpkins, so my sister and I would each decorate a pumpkin with paint or markers. I vowed that when I was older and had children of my own, we would carve pumpkins. They would not be denied the joy of putting their hands through mountains of pumpkin goo! My love of pumpkins became a brief obsession when I filled in on a seasonal basis as Pumpkin Spice with the Spice Girls in the late ’90s. By the time we all went our separate ways, I was a bit burnt out on pumpkins, but still broke out the occasional gourd and hay bale when fall rolled around. By the time Tony and I had kids, my love was rekindled. Although my kids couldn’t do much in the early days, we made pumpkin carving a big family event, and to this day everyone looks forward to it. (Although now I TOTALLY understand why my parents restricted us to paint or markers.) We still break out the tempras and even glitter occasionally, but we always carve out a few pumpkins and roast the seeds. Tony also buys several smaller pumpkins to make into pie; none of that canned stuff up in here! Eventually, we haul them out to the compost pile where the chickens take pecks and eventually the get worked back into the land. Circle of life!

Every year I try to get a bit more creative with my pumpkin carving, and as a result the older kids are getting more daring too. I maintain a collection of pumpkin inspiration on Pinterest. When it comes to fall decorating, I can never seem to get more than some jack o’ lanterns carved, but that’s probably because I’m using the rest of my free time to build insanely complicated Halloween costumes. Even though it’s not a lot, a half dozen illuminated pumpkins on our front steps are all the fall decorations I need to be happy.

Enjoy this gallery of some of our family’s greatest pumpkin carving moments from the past. It includes pumpkins (and costumes because sometimes I forgot to photograph just the carving process) from 2007 to 2013. 2010 is missing because that’s the year Teddy was born and in the NICU so I was a bit preoccupied. 2012 was the year of Hurricane Sandy and while I have several pictures of wind damage, there’s no pumpkins.

We haven’t bought our pumpkins for this year because, inevitably, we’ll get a heat wave yet some time this month that would reduce them to mushy, black blobs. You can follow me on Instagram if you want to be kept abreast on the latest developments on Pumpkin Carve-alot 2014. 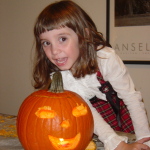 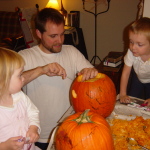 Tony making sense of the kids designs and carving. 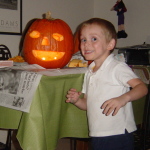 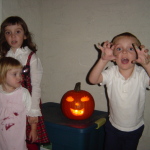 Terrifying! And I’m talking about that stain or Edie’s dress. 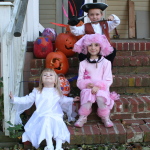 We busted out the paint AND feathers this year. 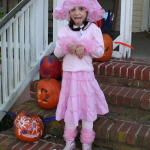 Costumes like this pink poodle are why I can’t do more than carve pumpkins. 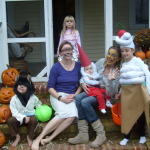 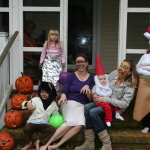 Even the adults got into the fun. 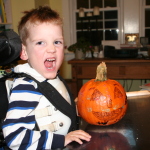 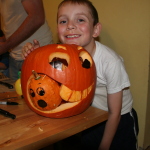 Byron wanted to take credit for this, but it was all me. 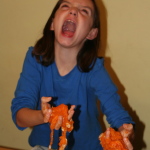 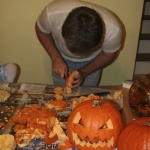 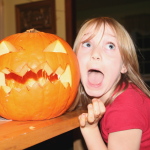 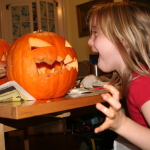 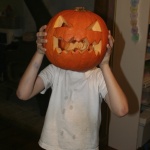 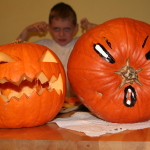 I like using the stem as a nose; and encouraging my kids to make weird faces in the background. 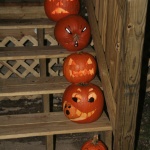 Display on our new porch steps. 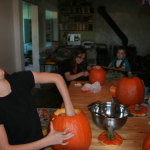 Addie and guts…does this look familiar? 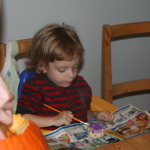 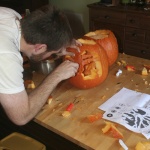 Tony picked the hardest design in the book. 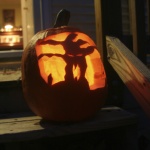 But he was pretty successful. 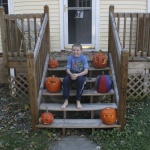 Byron posing with several of our Star Wars pumpkins before the chickens pecked their faces off.

I’ll tell you what I want, what I really, really want. I really, really, really wanna visit the rest of the ladies on Bonnie’s Autumn in the Home blog hop! What do you think about that?  Now you know how I feel; say you can handle this link up; blog reader are you for real? I won’t be hasty, I’ll give you time to try, but if you really bug me then I’ll say goodbye.