It’s time for the yearly practice of setting myself up for disappointment! Let’s talk New Year’s resolutions! YAY!!!

How’d I do in 2015. To recap, my saint was St. John Bosco, my word was gratitude and my beast was the Jaberwocky.

I immediately forgot about ALL OF THOSE THINGS ten minutes after hitting publish on last year’s resolutions post. However, I did make a note of my resolutions in my planner, referenced it often and managed to not be a complete failure as a result.

1.Organize all our digital photos. I started, but didn’t finish because I also took on the task of organizing 40+ years of my parents photographs which had been scattered all over their house in various drawers and cabinets. It became a much more monumental task than I imagined. However, for Christmas this year I presented them with several new albums of photos plus all their snapshots, organized by decade, in 25 archival boxes, plus five boxes of oversized photos, also organized by decade. Phew! Now I can focus my efforts of cleaning up almost 10 years of digital images on our old desktop before it goes kaput.

2. Do a Whole30/40 during Lent. DONE! Although it was a painful experience in some ways, I learned a lot and enjoyed the community of readers who joined me throughout the experience.

3.Buy a beach house. FAIL. I’m still not living at the beach. Boo.

4. Hold a garage sale/ clean out the house. While I didn’t hold a garage sale (too much work) I did clean out a bunch of old stuff. However somebody under this roof has a lot of old computer and gaming stuff taking up a whole closet that I can’t touch.

5. Book more speaking gigs. Last year I had two speaking engagements. I actually had a couple more offers but I had to decline because SPEAKING IS REALLY HARD. Especially since I was going about it in the hardest way possible. After writing out two talks, and being physically ill about both of them, I needed a break. I’ve since recovered my nerve and am willing to take on some new speaking opportunities (especially after studying the proper, less stressful way to prepare a talk) if anyone is willing to take a chance on this greenhorn.I should note that while I felt stressed and awful about my talks, both were very well received. I’m an ace at bottling up my true feelings on stage.

6. Bring in nursing help. My husband and I researched all our outlets for help, talked with a bunch of unhelpful people, a couple helpful people and decided on a course of action. Thus far, this course means we do not have any help in the home, but Tony is working from home now and that has been a huge help. It will suffice until we decide to bring in outside assistance.

I felt like I ended 2015 on a high note and I’m hoping to carry that into 2016. Onto my resolutions, which right this very minute I feel very good about! Oh, except for the fact that the random saint generator chose St. Genevieve as my patron this year. You know St. Genevieve, the patron of DISASTER and some other stuff I can’t remember but DISASTER, good grief. I’ll be walking on egg shells all year. This current feeling of calm must be that which comes before the storm.

1.Finish organizing our digital library. I’m not taking on anyone else’s organization projects this year!!

3. Plan another family vacation. This will depend heavily on Tony’s available vacation, but hopefully with remote flexibility we can make something work.

4. Incorporate exercise into daily routine. I’ve finally found a system for myself that keeps my days running smoothly. As it becomes more of an ingrained habit, I’m adding smaller goals to each day’s routine. Eventually, I hope to build up to making regular exercise something I do without thinking.

5. Write my book. THIS is the big one. I was approached last year by an editor with a book idea. I thought, well, that’s sounds interesting. I could do that. But, I have very limited free time so I consulted with a friend/ mentor and asked her opinion. Was this the book I should work on? I told her I wanted to write a book and since I wasn’t sure I had much of a story to tell on my own, I was considering writing the book proposed to me. She basically said, go ahead and write that editor’s book if you want, but she insisted I did have a story to tell, she told me what it was and said to not waste time getting it written. I thought over her advice and soon after I received an email from a reader. As I read this email from another struggling special needs parent, and as I typed out the same advice and words of comfort I’ve done so many times God smacked me upside the head and said ‘THIS IS THE BOOK YOU NEED TO WRITE’. So I completely scrapped the idea presented to me and taking the advice of my friend/mentor and divine inspiration I’m writing a guidebook of sorts for parents who’ve received a serious medical diagnosis. In it, I will share much of my family’s story and how I’ve moved from sadness, anger, and despair to not just acceptance but even hope and joy. I hope to include information for friends and family on how to help special needs parents as well. It will be the book I needed six and a half years ago. My goal is to finish a draft this year. Whether I get around to much editing or submitting remains to be seen. I’m telling you all because I know you’ll harass me about it, keep me motivated and because I know there are many of you out there who need this book. Some of you have emailed me but I’m sure many more of you have not. I want to get this to you as soon as possible.

To keep me motivated of this, and all my resolutions, I’ve actually entered my resolutions on my phone and set a weekly reminder to read them on the same day I write out my week in my planner.

And don’t worry, I chose a beast as well. 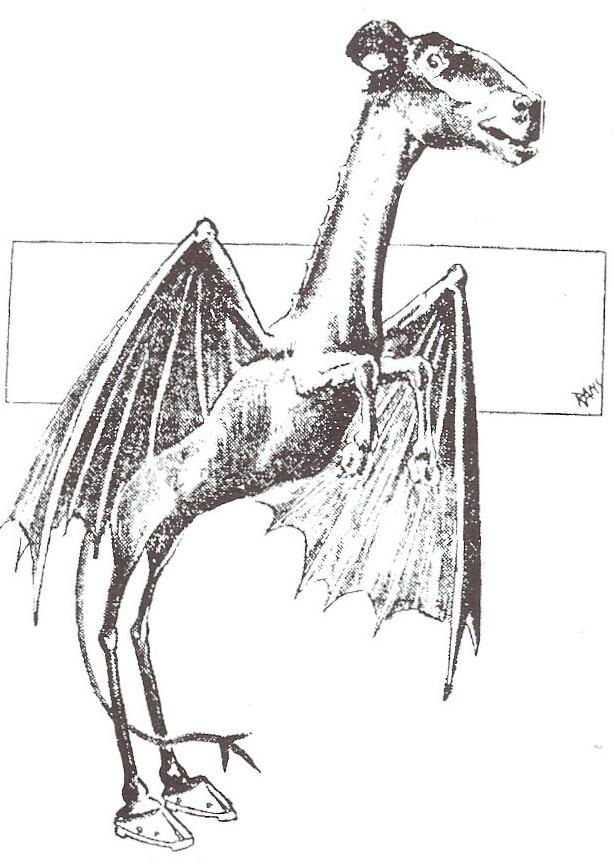 That’s right, the Jersey Devil is going to motivate me this year and also add a bit of flair to our bedtime story routine. It also seems fitting since we’ve celebrated ten years in New Jersey this past fall. What was to become a temporary stop following a time of financial hardship for our family, has truly become our home.

Hope that delightful picture made reading this long post worthwhile. What resolutions have you made or already broken? If you’re so inclined, read my past resolutions here: