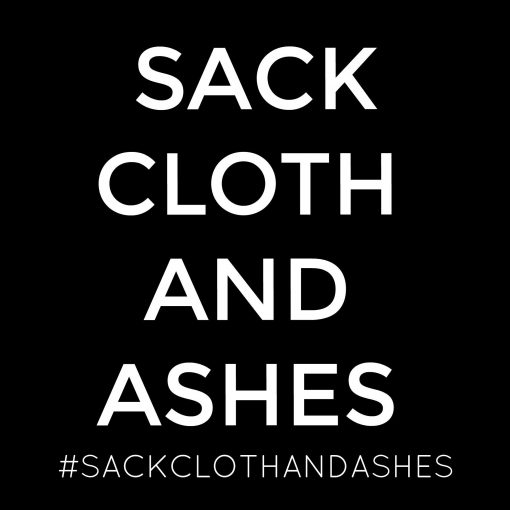 Today begins the #sackclothandashes campaign founded by my good friends Kendra and Bonnie. I invite you to join along with us for 40 days of fasting and prayer in reparation for the sins committed against the faithful of the Church by those who should have been leading it. 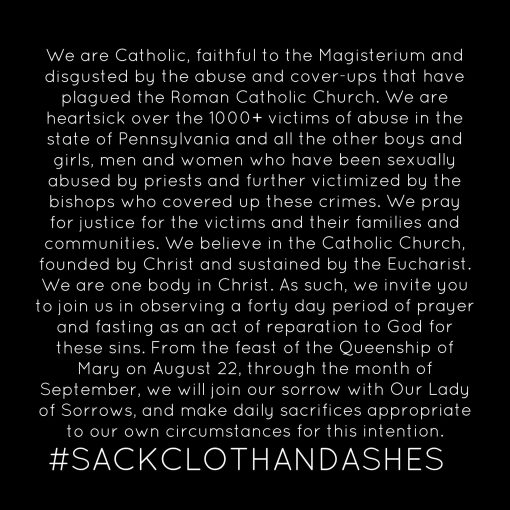 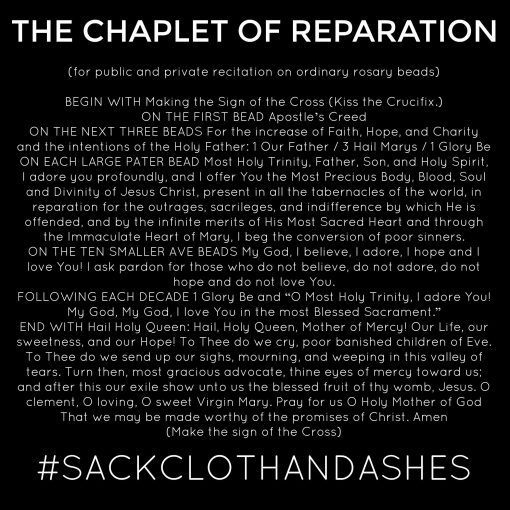 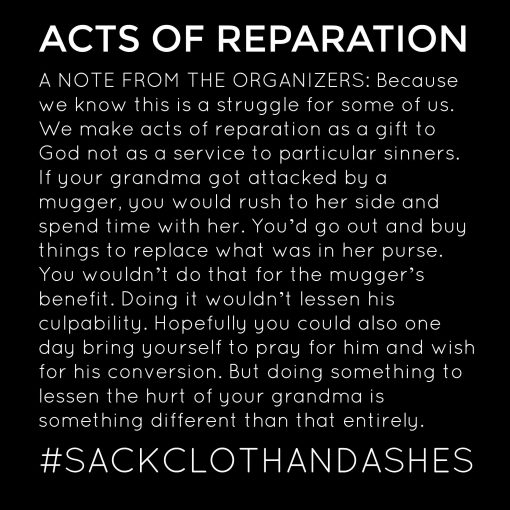 While it would be easy to despair at not only the amount of abuse that was revealed in the Pennsylvania Grand Jury report, and the calculated effort to cover it up and shuffle around abusers, we must not throw up our hands and consider the state of the Church hopeless.

And I say to thee: That thou art Peter; and upon this rock I will build my church, and the gates of hell shall not prevail against it. Mathew 16:18

The Church has undergone great tribulation in her 2,000 + years.

One of the men chosen by Christ himself, betrayed Our Lord for 30 pieces of silver.

Under the Roman emperors until Constantine’s Edict of Milan 313, the Church faced constant persecution and Christians were forced to worship underground. Many were tortured and martyred in cruel and painful ways.

Between the years of 1378 and 1417 there were two, then three, competing popes, each claiming legitimacy to the chair of Peter. It can be said that this time in the Church’s history lead to frustration which may have contributed to …

Martin Luther nailing his 95 thesis to the doors of the Wittenberg Castle church on October 31, 1517.  By the end of the century the Church had splintered into many different Protestant denominations.

But from those circumstances

A new apostle, St. Matthias, was chosen to replace Judas and all these disciples joyfully met martyrdom for the Lord (except for St. John who died of old age) while spreading the Gospel throughout the World.

Early Christians like St. Lawrence, Sts Perpetua and Felicity, St Cecilia helped swell the ranks of the Church despite the risks and sacrifices.

In response, the Council of Trent was called and the beliefs of the Church were reaffirmed and a new breed of saints such as St. Francis de Sales fought the Protestant reformers and brought souls back to Christ’s one true Church.

I state these points not to diminish the current scandal, but to show that, despite all this and more, Christ’s words to His apostle Peter remain true! And that during these most trying of times, God raised up men and women to fight those who would try to tear apart the Catholic Church from the inside.

We are being called to rise up against this current infection in the Church. Not only through prayer and fasting, but through action.

1. Talk to your children about sexual abuse.

2. Learn what training, and background checks, those who work with children in your diocese need to undergo. Make sure everyone in your parish who works with children is properly trained. Take the training yourself to learn how to talk to your own kids and so you know how to spot the signs of abuse in others.

4. Do you know what to do if you find out your parish priest is engaging in behavior not consistent with his state in life, but that is not criminal (such as a consensual sexual relationship with another adult)?

5. If you approach your bishop about problems with your priest and they are ignored, do you know how to go up the chain of command?

6. Do seminarians in your diocese know how to report priests and professors who may be teaching and/or engaging in inappropriate behavior? What measures are in place to protect low men on the totem pole who need to report misconduct? (If you can’t easily locate the information for #4-6, write or call your diocese to find out and suggest the information be made public.)

7. Do you know how to support someone who comes to you suffering from the results of past abuse? (Check RAINN for ideas.)

8. Can you easily find information on past abusers in your diocese and state to make sure they are no longer in ministry or working with minors? (Some dioceses, like the Archdiocese of Philadelphia provide this information online, but you can also check BishopAccountability.org to check other dioceses.)

You can’t discern a correct course of action without prayer, but many holy men and women did more than just pray to root out the influence of Satan in their Church.

Education yourself, pray, take action, and remain hopeful knowing that our efforts will prevail against the gates of Hell.

“The word of the Lord came to me:
Son of man, prophesy against the shepherds of Israel,
in these words prophesy to them to the shepherds:
Thus says the Lord GOD: Woe to the shepherds of Israel
who have been pasturing themselves!
Should not shepherds, rather, pasture sheep?
You have fed off their milk, worn their wool,
and slaughtered the fatlings,
but the sheep you have not pastured.
You did not strengthen the weak nor heal the sick
nor bind up the injured.
You did not bring back the strayed nor seek the lost,
but you lorded it over them harshly and brutally.
So they were scattered for the lack of a shepherd,
and became food for all the wild beasts.
My sheep were scattered
and wandered over all the mountains and high hills;
my sheep were scattered over the whole earth,
with no one to look after them or to search for them.

Therefore, shepherds, hear the word of the LORD:
As I live, says the Lord GOD,
because my sheep have been given over to pillage,
and because my sheep have become food for every wild beast,
for lack of a shepherd;
because my shepherds did not look after my sheep,
but pastured themselves and did not pasture my sheep;
because of this, shepherds, hear the word of the LORD:
Thus says the Lord GOD:
I swear I am coming against these shepherds.
I will claim my sheep from them
and put a stop to their shepherding my sheep
so that they may no longer pasture themselves.
I will save my sheep,
that they may no longer be food for their mouths.For thus says the Lord GOD:
I myself will look after and tend my sheep.”