It’s the first full week of Lent, when the fervor of Ash Wednesday starts to die down and we wonder what we really signed ourselves up for.

As I mentioned in an earlier post, I’m eating like St. Hildegard this Lent. I know many of you are wondering what that exactly means, and maybe some of you have never had the pleasure of being introduced to the most recent Doctor of the Church.Today I’ll lay it all out for you. 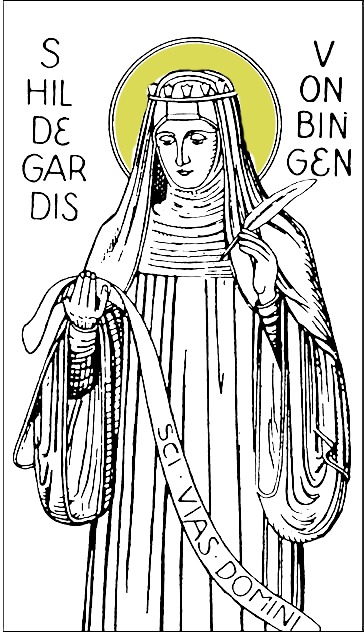 If you’d like a detailed background on Hildegard.   Short version: 12th century German nun, mystic, abbess, she wrote music, kept correspondence with popes and kings, traveled as a preacher, and she penned several books that detailed medicine, faith and theology often overlapping the topics.  Pope Benedict XVI declared her a Doctor of the Church in 2012 saying she was, ” a true master of theology and a great scholar of the natural sciences and of music.”

I personally first learned of St. Hildegard in the book ‘God’s Hotel’. The author was inspired by the medical writings of Hildegard and upon finishing the book I checked out a title from our local library on the saint. Soon after I bought a translation of ‘Physica’ (which was estimated to have been written by Hildegard between 1151-1158) which describes all the elements and animals of the natural world and which were good to eat or how they were to be used as medicine. We got a copy of her music uploaded to iTunes and at one point I put a cookbook, ‘From Saint Hildegard’s Kitchen‘ on my Wishlist.

This Christmas I finally got that book and it was the missing piece; how to take all those crazy entries in Physica and put them in actual recipes. It was the first time I thought, hey, I could actually eat the way Hildegard recommends! The history nerd in me got excited. I researched the availability of certain foods (thank you Amazon) and mentally prepared a menu. Lent seemed like the perfect time to undertake such a dietary shift since it would mean giving up so many of my favorite foods. Tony thought it sounded like a fun experiment (because he loves medieval history as much as me) and we decided to make it official by ordering a bag of spelt grain.

People in 12th century Germany had lots of food to choose from, however, it’s still not every thing that we have today. Rather than list all the foods I’m eating, I thought I’d mention many of the things I can’t (it seems more dramatic that way).

Thankfully, unicorn meat is still on the menu.

Many of the food we enjoy today hadn’t quite reached Hildegard’s convent.. The foods with an asterisk are items that Hildegard had access to, but she didn’t feel they were good for people to eat for various reasons. Therefore, I’ve omitted them, however I am using some as substitutes when necessary. For instance, most fish I’m in the habit of purchasing (flounder, tuna, tilapia) Hildegard had no experience with. At my store, I couldn’t find approved fish so I settled for cod. (Which she doesn’t recommend you eat the meat of, but much like today’s doctors, she recommends the liver for healthy and sick people alike.) I’ve also made minor adjustments when cooking for the family since Teddy can’t have dairy. If I’m making a meal for us all I’ll use olive oil or coconut oil rather than the Hildegard approved butter.

While I’ve given up some of my favorite things, namely coffee, bacon and Mexican food, I find solace in glasses of German wine and chunks of cheese and warm spelt bread with dinner.

And dates. It wouldn’t be Lent if I didn’t try to satisfy my starved sweet tooth with dates.

As many of you will remember, I eat gluten-free, but I have not been diagnosed with Celiac disease. I gave up gluten four years ago for Lent and immediately stopped having severe headaches and lower GI issues. Despite not having an official diagnosis, I remained off gluten, though I know that I can eat it occasionally in small amounts with no trouble. I still can’t drink beer at all, which make me very sad. Spelt flour does contain gluten, though in smaller amounts than wheat. So far, I seem to tolerate a slice of spelt bread with each meal. It’s interesting to read the harsh words Hildegard wrote of white flour long before the recent gluten-free/ grain-free / low-carb “fad”.

Wheat is hot and full of profit. Nothing is lacking in it. When proper flour is made from it, and bread made from that flour, it is good for both the healthy and the sick. It furnishes a person with proper flesh and correct blood. But if anyone sifts out the bran from the flour and then makes bread from that flour, the bread is weaker and more feeble than if it had been made from the proper flour. Without it’s bran, the flour loses it’s strength somewhat, and produces more mucus in a person than that made from the whole wet flour. …this wheat furnishes neither correct blood or healthy flesh, but more mucus. It is scarcely digested. It is not at all good for a sick person, even if a healthy person is able to survive on this food.

My constant dairy, wine and grain consumption is in sharp contrast to the Whole30 I tried last Lent. With the Whole30 I saw huge positive effects in my blood pressure and I slept like a rock. I’ll be curious to see how Hildegard’s diet compares, especially since I’ve given up caffeine. I should note that in Hildegard’s time, the Lenten fast was much more rigorous and excluded all meat and animal products. I am not observing a medieval Lenten fast, just trying to eat the foods available to Hildegard when she lived.

Her guidelines for eating and living were rooted in commonly held beliefs of the Middle Ages and aimed to bring the four humors of a person in balance and keep them holy. However, Hildegarde was also granted many mystical visions which influenced all her writing and it’s why I give her lifestyle advice at least a much credence as Dr. Oz. I found another blogger who attempted a similar diet (and maybe still is) and I’ve tried to use her post as a guide for myself.

When it comes to Lent, I need very clear-cut rules and guidelines to follow, otherwise “giving up chocolate” equals gouging on gummi worms, or “snacking less” means four handfuls of trail mix instead of five.Without fail, I will find every loophole. Having everything spelled out for me from the beginning makes it easier for me to go about my Lenten business without second guessing every choice I make. If it’s an okay food in Hildegard’s book, I’ll eat it, if not, it’s off my plate.

Maybe some of you are wondering why I’m writing posts about my Lenten fast. Maybe you believe I should “… anoint your head and wash your face so that your fasting will not be noticed by men, but by your Father who is in secret…”

And I agree with you in many ways. I didn’t start publicly announcing (i.e. blogging) my Lenten practices until last year’s Whole30. Before then I didn’t understand why everyone would share what they were doing online. Isn’t that best kept between you, God and your confessor? However, I learned that without clear-cut rules and public accountability I often could not stick with my Lenten goals. (For example, drinking three cans of Coke in a day after swearing off soda.) And that’s not to say I haven’t also selected readings, prayers, etc that I’m not sharing with you. I like to keep somewhat of a mystery around myself.

I have a “better” Lent (picture major air quotes back there) when I fast. But I am much more successful at fasting with the support of my husband, friends, family and online community, even if that makes me look like a Pharisee.

As this introduction is tipping the scales at long and wordy, I’ll wrap it up here. What questions didn’t I answer? Besides sharing lots of tasty vegetarian soup and spelt recipes, what would you like to know? More about black bile? Great! Check for an update next week!