{SQT} The Face of Sainthood and Crowdsourcing for Gifts

I had a lot of grandiose plans for this week’s takes, but then I decided to finally KonMari

the house while we were off school AND squeeze in a ton of last minute doctors appointments… so, yeah, my house is a disaster, I haven’t completed lesson plans for our last trimester of school (starting Monday!) and I’m woefully behind in updating my Facebook statuses. Friends, fans; please accept these takes with my humblest apologies.

1. The homeschool conference went great last Saturday. I met a few readers, sold a few planners and ran all the audio/ visual equipment because apparently I don’t like sitting still. And considering I haven’t given a talk since college, I think I did a pretty good job. (How’s that for a ringing endorsement?) I hope to have my talk, and the others, online by next week on our homeschool group’s YouTube channel. There’s a lot of great talks up already so if you need a kick in the homeschool butt, check them out.

2.I joked with some friends at the conference about my “celebrity status” and the idea was pitched that rather than sponsored posts or speaking gigs I should hit the big time and try to get my face on a cereal box. 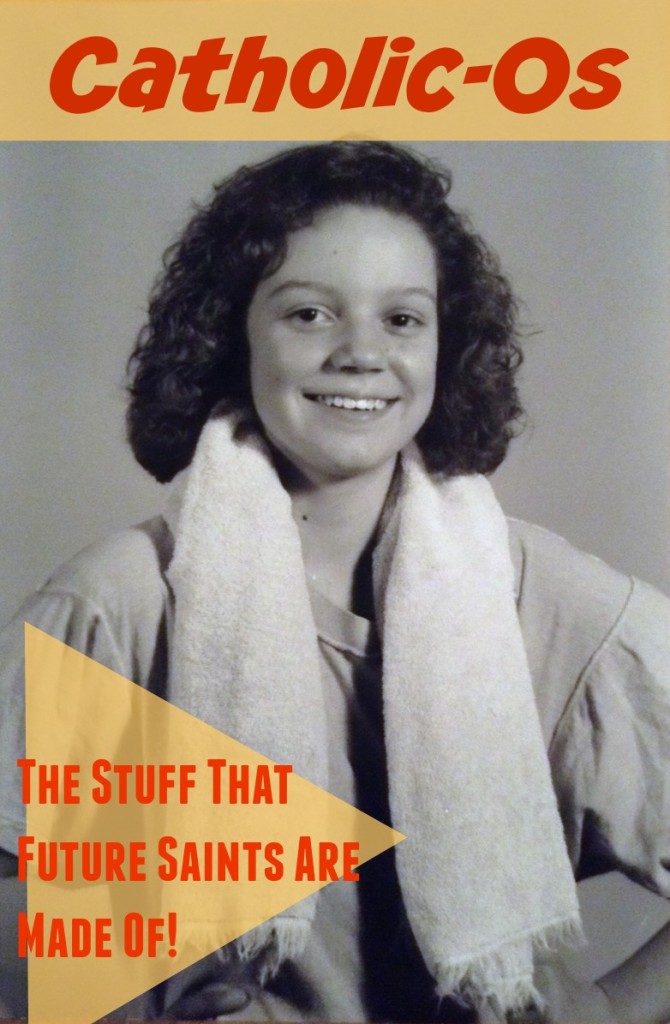 Getting to heaven takes a lot of hard work (the rolled towel carefully placed around my neck indicates strenuous activity) but I’m prepping for the pearly gates by eating my Catholic-Os! Part of this complete breakfast! (Imagine a photo of a bowl of cereal surrounded by bacon, orange juice, two fried eggs, a melon and the Summa Theologica.)

3. I’m forced to create my own opportunities because Pepsi hasn’t returned my calls for the last twenty years.

for Christmas this year, and despite the fact that the band irritates my skin, I hardly ever take it off. (I mean, at one point it looked like I had leprosy, so I took it off for a couple days but it’s back on now.) It’s a neat piece of equipment that keeps track of (and probably shares with the NSA) my steps, sleep pattern, active minutes, calories burned, etc. However, there are times during my day when it gets really annoyed and vibrates at me, and does this little light show to mean “Stop what you’re doing! I can’t figure out your steps! WTH! STOP IT!!” Often, it stays mad at me for hours and refuses to let me know how close I am to my goal unless I sync it up with my iPod and/or prancersise gently around the house. Some top examples of when my fitbit just. can’t. even.

Drumming with anything. (Like seriously, Lars Ulrich, do not buy a fitbit.)

5. After reading The War of Art

I’m trying really hard to get up early again and put in at least an hour of writing/ bloggy related stuff every day. It’s been going really poorly mostly because my bed is SO SNUGGLY. However I recently set up a really aggravating alarm to help jump start my day.

First, on an iPod (or I suppose an iPhone) you can label your alarm, so rather than my 5:50 a.m. alarm just going off it now says “Be a expletive professional and get out of bed.” I’m the one that programed the alarm, and yet every morning I’m still surprised that my iPod is so harsh and forthright. Then, I selected a song that starts off punchy. In the past I’ve relied heavily on the Beastie Boys, but right now it’s set for ‘Starry Eyed Surprise’ because when the guy at the beginning yells “Hey DJ!” I’m like, “What?! Where?! Am I at a rave?!” and almost hit my husband with my flailing arms. every. time. So between being verbally abused by my iPod and yelled at by my music, I’ve been having much greater success at making it downstairs before the kids are awake.

6. If anyone in your family is a Marvel fan, I think they’ll like this video, based on the fact that my kids have asked to watch it a million times. And each time, Fulton has to tell me all the characters….like he didn’t just tell me five minutes prior.

7. I’m attending several First Holy Communion parties this weekend, and later in the month a Confirmation bash. Hit me up with your best gift ideas. I’m trying to avoid pictures frames, rosaries, or ceramic keepsakes; anything that these great kids will already be receiving in droves. Feel free to shamelessly promote your own products in the comboxes. As a last resort, I will be re-gifting all the ceramic keepsakes currently cluttering up my daughters’ bedroom. Do my friends a favor and suggest away!

Don’t forget to link up your own takes below with a link back to this post so your readers can find the rest of the Quick Take links! I look forward to reading your posts!