My life has been so unfunny and blah lately. I was going to title my Quick Takes “Seven horrible things about starting school right back up after vacation” but decided there’s little humor in the vivid description of me in a dirty bathrobe hiding in bed at 10:30 a.m. with a cold mug of coffee.

Knowing inspiration was at an all time low (I can’t even slap photos together for a decent slide show these days!) I turned to my friend social media for some ideas. Thankfully, my online friends came through. So now, I answer seven questions submitted by my readers.

“Do you sleep on a specific side of the bed?”

1. Yes, at home I’m always on the left. When we travel, I take the side closest to the bathroom. However, to y’all I might reveal that last weekend while traveling I picked the side against the wall to “encourage” Tony to get up with Fulton and Teddy. But I’ll deny it if you tell him!

“Best poop story, most embarrassing story from before you had kids, childhood crush, which boy band is your favorite (Backstreet Boys, N*Sync, or 98 degrees), WHY do you live in New Jersey???”

2. Hmmmm… Would a story about how I pooped my pants in second grade count for two? (Ha, number two!) Anyway, I was wearing this cute one piece sailor suit when I ran to the bathroom in panic and couldn’t figure out how to get out of it before …stuff hit the fan. My teacher found me in the bathroom crying “It’s not me, it’s the sailor suit!” She took me to the nurse’s office where I got to pick out an awesome outfit that must have been in storage since the 70’s. Even at seven years old, I knew it was hideous. (Yet, I willingly wore a sailor suit. Puzzling.)

3. Boy band? I’d say Backstreet, but I have a soft spot for N*Sync because I saw them in concert while interning at my local newspaper. But my story never got published because I drove a company car to the event and lost it in the parking lot.(Was it a Taurus or a Cavalier?) I wandered around for hours sticking my key into random cars with no luck before finally spotting it in an adjacent lot after most of the crowd had gone home. This was before I had a cell phone so I showed up back at the office way past deadline with this horrible story and basically two of my editors looked at me like, “You’re never going to make it in this business.”

4.  Ah, the Garden State. As a child, I wanted to live here just to be close to the ocean. However, I could never have predicted our move here. After I learned I was expecting Byron, we decided to move from Upstate New York to Lancaster. But Tony was only experienced in the Defense Industry and the closest job he could get to our new home (also a bed and breakfast) was in Camden, NJ. We figured he’d make the commute for a year and then we’d be able to live off the income from the B&B and he could quit. (Insert crazy laugh here.) After two years as inn owners, we moved to New Jersey, to a tiny apartment within walking distance of a train station. I seriously felt the previous years’ horrible commutes (plus the problems with our business) aged Tony about ten years in that time. Consequently, reducing his commute time to 40 minutes of walking and riding the train was like a vacation.
While we never meant to stay in Jersey, we quickly discovered our parish and entered into a community I can’t imagine leaving now. Plus, homeschooling laws in NJ are probably the most lax in the whole country, so even though the majority of our sky-high taxes go to schools, I get no hassles here. It means there’s more homeschool activities and groups than you can shake a stick at.

5. An exchange I had with Addie after Mass in Kitty Hawk.

A: “Why did they clap at the end of Mass? Were they glad Mass was over?

Me: “No, they were clapping for the musician playing the guitar.”

6. We ate at a pirate restaurant on Sunday; two days after their kids eat free promo. D’oh!

The most memorable moment came when I manged to pierce the bottom of Teddy’s Styrofoam cup full of chocolate milk with his pirate flag straw and empty all the contents onto the table, and Teddy and my feet. Seriously, you can’t take me anywhere. 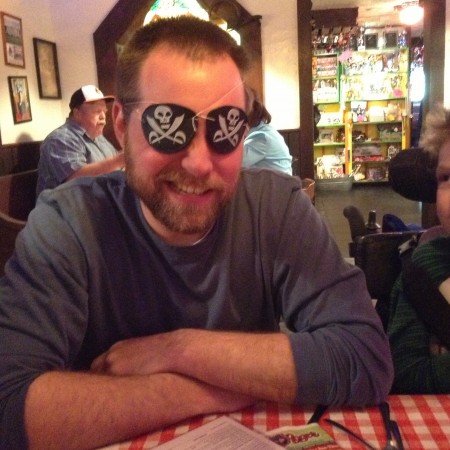 “Why is it that we drive on the parkway, but park in the driveway? Why does sour cream have an expiration date? What does a yellow light mean? How come in Star Wars, the Imperials can immediately scan an escape pod to determine there are no life forms aboard, but can’t do the same with the Millennium Falcon? Where do babies come from?”

Anything else you want to know? Send me an email. I’ll gladly answer all your queries next time I’m lacking material. Until then, go check out the rest of the Quake Tickers at Conversion Diary.