{SQT} August Is The Relaxing Month Of Worry

1. Since being sick earlier in the summer, I started watching ‘Parks and Recreation’. I have not followed a TV show since Tony and I rented seasons of the Sopranos from Blockbuster Video. It’s eating up too much of my time and I’ve made no progress in War and Peace. On the other hand, it’s nice to finally get so many Ron Swanson memes and related P&R pop culture references. I love every episode but feel horribly guilty afterwards because I haven’t done something more important like write, read, clean, not hide from my children, or sleep.

2. And I got so many good books at the Catholic Marketing Trade Show and Catholic Writers Guild Conference last Friday! All my favorite publishers were there, and a couple new favorites. I look forward to sharing my haul with y’all soon…very soon. But I’m only on season seven of P&R so…

I was given a complimentary box of tea upon arrival at the conference with no markings on it; just a plain white box. Having never gotten an entire box of tea in a swag bag before I opened it to see who it was from. I haven’t stopped laughing about the Catholic Moms COMMUNI-TEA !!! Seriously, ask my kids how much I’m offering them tea lately.

3. In general, we’re done with camps and trips and I should be able to relax and settle into the gentle art of homeschool planning while enjoying the fact that I’m not taking someone somewhere.The kids disagree so perhaps a few more beach days will be in order and there’s been talk amongst the older kids to start a YouTube show based on our family (which Byron would like to call ‘Byron’). I can’t imagine how thrilling it would be to watch us argue about Marvel movies but we’ll see.

4. I guess I’m also trying to not hurry through the last few weeks of summer knowing that Fulton has spinal fusion surgery looming around the corner. The date is set for Tues. Sept. 11th. We’ll go in Monday and he’ll be inpatient at Shriner’s Hospital of Philadelphia for at least a week, then in recovery at home for six to eight weeks. There will be no weekend plans, no travel, no nothing out of the ordinary for a bit while we let him heal. We’ll have grandparent help for four weeks (more if we need it) and as many nursing hours as our insurance company will allow. On Sunday Sept. 9th, Fulton will receive anointing of the sick after Mass which is a relief, but kind of jarring at the same time because my child is undergoing something so serious as to warrant receiving LAST RITES.

5. Right now, I haul 60+ lb Fulton around like a sack of potatoes. I toss him on the bed and he laughs. I tackle him. I accidentally bump his feet into doorways as I maneuver him into his bedroom. But, after back surgery, it’ll be a whole new ballgame. WWF wrestling moves unto his bed will no longer be allowed. Instead, we’ve gotten a Hoyer lift to help safely transfer him post surgery, and because he’s only going to get bigger and heavier and, as one nurse kindly reminded me, I’m only getting older. Doctors and therapists have suggested getting a Hoyer lift for YEARS and we’ve always said no because it’s about the size of golf cart and we simply don’t have room to move a golf cart around. But we relented because, frankly, I’m terrified of hurting him during a transfer. Currently, we can’t use the back door because that was the only place we could park it. I haven’t even tried it yet because it doesn’t easily fit in his room. The goal is to take Teddy’s bed out of the downstair’s bedroom for the duration of Fulton’s recovery so we have room to safely transfer him from his bed to his powerchair or bath chair. So yes, we’ll be carrying Teddy upstairs to sleep for a bit in Byron’s room, which he’s thrilled about so I guess that’s the silver lining.

The best was when the medical supply company rep dropped of the lift and he was like, “This comes apart for storage!” And I was like “Great! Because it’s currently taking up most of my dining room!” And then he popped the large top part out and said “See?!” Like the huge rolling base and heavy top crane section were now 100 times easier to store. Thus, no back door access. 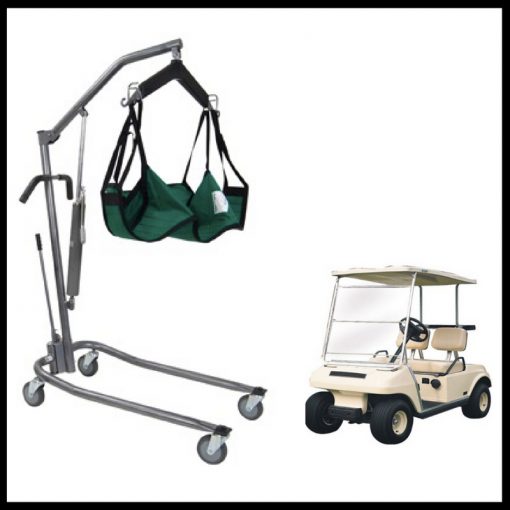 Here is a Hoyer lift shown actual size next to a golf cart. The lift requires a small team of oxen to operate, which I did not include in this graphic.

6. Planning for my conference for Catholic special needs parents is taking shape! The event will be Sat., April 27, 2019 at Mater Ecclesiae Parish, Berlin NJ. There will be speakers (Most notably Mary Lenaburg)! And food, and Adoration, and time to talk with other parents (about huge, annoying Hoyer lifts!) AND most importantly, if you can’t travel, all the talks will be streamed online! I am finalizing things like the name (sort of important), and the website, and will obviously share ALL THE THINGS with you as they develop. But save the date! And if you know of any organizations that would like to sponsor this event, email me! Still figuring out a way to work some free COMMUNI-TEA into our swag bag merchandise. Because every special needs parent needs a supportive COMMUNI-TEA!!! Man…I die every time.

7. Maybe my kids just want to start a YouTube channel to share humiliating videos of me and my puns. But if COMMUNI-TEA is wrong, then I don’t want to be right. Also this: 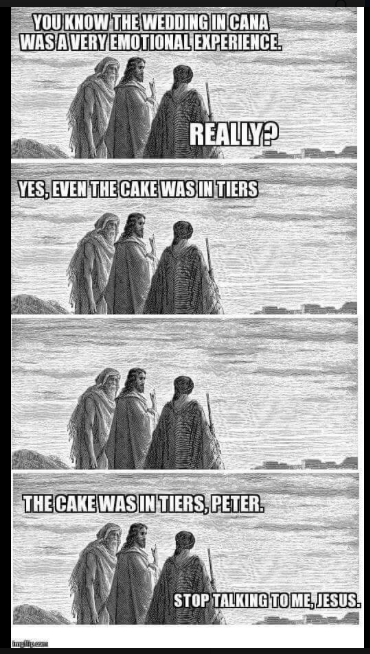 How’s your week? Write it down then link it up below. Be sure to include a link back to this post so your readers can find the rest of the Quick Takes. I look forward to reading your posts!