How is your Easter STILL GOING? Write it down and link it up! Be sure to include a link back to this post so you readers can find the rest of the Quick Takes. I look forward to reading your posts!

#7 Last but certainly not least, I’m going to hit y’all up for money. Not for me, but for a much better cause; that of life and respecting it at all ages and stages. Many of you are familiar with Mary Lenaburg, her blog Passionate Perseverance and the Lenaburg’s lovely saint Courtney who entered into eternal life on Dec. 27 2014. On March 21, Mary received a medical bill demanding $7, 984 for services Courtney received in the ER in August 2014. That’s after working with the insurance company for more than a year and reducing the total from $10,000. The insurance company doesn’t think Courtney was worth spending that money on; her life was not valuable enough for them to cover the tests and interventions made that day.

Perhaps, more than some, I take this personally, because one day it may very well be me in the ER with one of my sons trying to offer them some comfort and relief before taking them home and preparing for the inevitable. Someday it may be you too. The care Courtney received that day gave her four more months. One more Thanksgiving and Christmas at home with her family and a peaceful passing in a familiar place. Being pro-life means supporting death with dignity for all people, especially for those like Courtney who cannot speak for themselves.

Won’t you donate something, anything, to help offset Courtney’s medical bills? #wegiveabuck

#6  In light of Mother’s passing, Jen shared a post from her archives on Facebook: The 7 Habits of People Who Place Radical Trust in God. Number 4 really stuck with me. “In prayer, they listen more than they talk.” She elaborates; “What I eventually realized is that their ideas about what to pray for came from the Holy Spirit in the first place, because they spent so much time seeking God’s will for them, day in and day out.”

I think lately I’ve had a lot of strong opinions about what I want for myself, my husband and my family and I’ve been very clear with God as to what those are. I’ve also been really frustrated as to why I’m not getting those very specific things right now, or even any clear indication as to when I’m going to get those very specific things. However, I realize now I’ve been so hung up on getting what I want, I haven’t been open at all to God revealing His intentions to me. So I need to shut up and listen. I also need to conquer my fear that I might never get those things I want. That’s the hard part. To see other people getting those things and wondering why not me? Why not us? Ugh. This faith thing never gets easier does it?

#5 Even if you live under a rock, you probably heard of EWTN’s founder Mother Angelica passing. I’m a fangirl and I read from her book of quotes frequently for inspiration. To keep Mother’s words close at hand, I’ve designed a couple of desktop wallpapers you may download to keep her quotes close to inspire you as well. (This is what happens when you get a laptop that runs well and makes using Canva a much less frustrating experience.) Click on each to download via Google Drive. The hardest part was deciding what quotes to use. 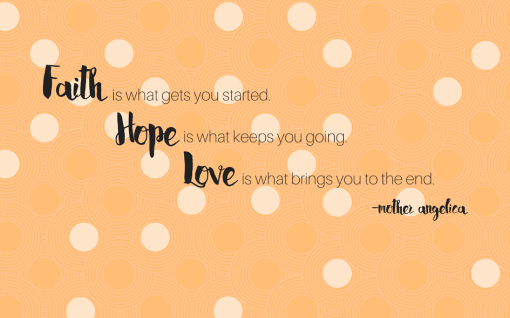 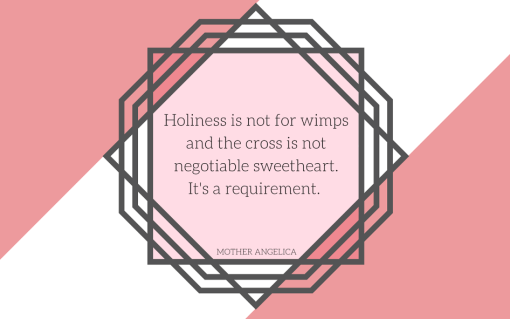 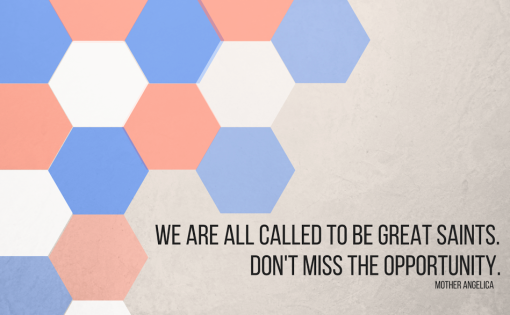 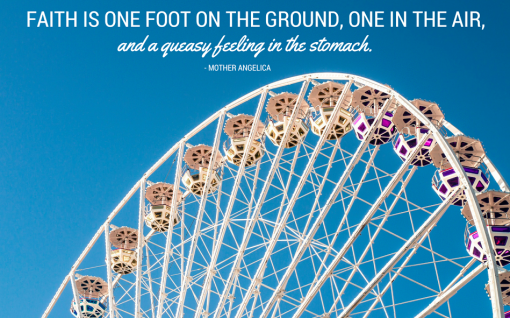 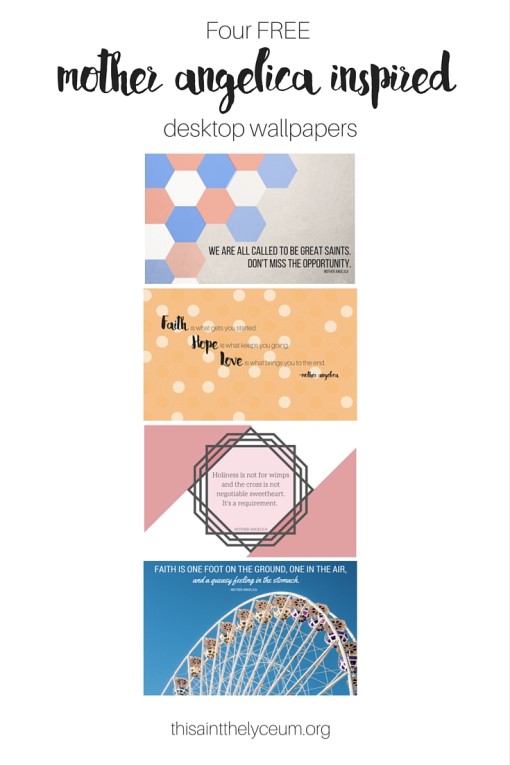 #4 I don’t decorate for Easter. That would mean storing seasonal decorations, making room for them somewhere and then putting them away. But this year, when digging out the Easter baskets I noticed we had accumulated an insane amount of plastic eggs. (Five kids + multiple egg hunts for several years will do that.) After tossing out some moldy M&Ms, my inner Martha Stewart kicked in and I cranked out a few sweet garlands. I didn’t even have to see it on Pinterest! Anyway, it’s just enough festiveness without any of that pesky dusting that decorating often requires. 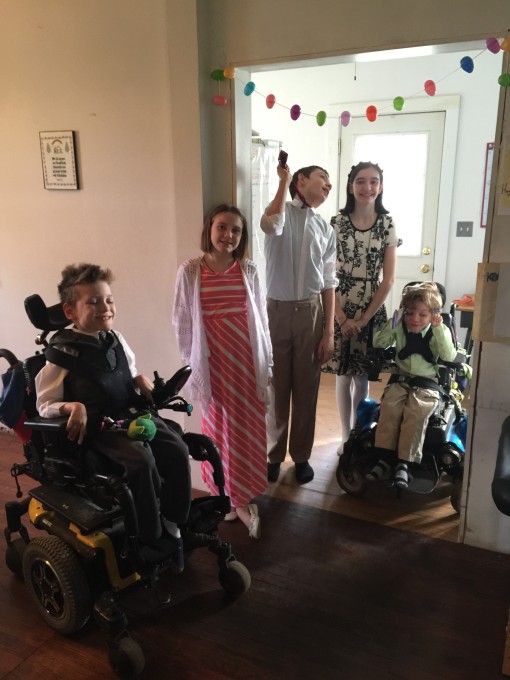 Look right above the clown being strangled by his necktie.

#3 Maybe you noticed I couldn’t completely stay off my blog for the last two weeks. Last Thursday as I was preparing a reminder for Friday’s nonexistent Quick Takes, I started searching for some Good Friday art to accompany my post. But in doing so, I discovered so many interesting paintings for the whole Tridium, I decided to schedule a post for Saturday and Sunday too. I also downloaded all the artwork to our family desktop (which sits in the living room) and set the screensaver to cycle through the pieces. It’s not uncommon for some of us to be gathered together in the living room reading or playing when the computer starts to display the images. It leads to great conversations about our favorites (or least favorites), the artists and the events/ time periods represented. If you’re looking for an easy way to incorporate art into your everyday, I can’t recommend this method enough. (In addition to liturgical themed images, we also use the screen saver to feature one artist at a time or several artists from one period. )

#2 Another surprising aspect to Lent this year were my dreams. Last year on the Whole30, I was always in a deep sleep and didn’t remember any dreams in the morning. I wondered if after eliminating certain food this year, those sleep patterns would return. Unfortunately, the opposite was the case. Most nights I had either vivid dreams in which I franticly needed to do something or be somewhere or I had outright nightmares. There was one where my husband left to do errands and never came home and no one could find him. Several nights a week, often several times a night, for most of Lent these dreams continued. Even when I was pregnant and had vivid dreams, I never had so many that left my heart racing upon waking. Thank goodness since Easter, I’ve been sleeping better. Times like these I wish we had people like Joseph who could accurately interpret dreams.

#1 I’m back! And fully refreshed thanks to swiping a steady stream of my kid’s Easter candy. The end of Lent was really a doozy for me. I was unusually exhausted, overwhelmed and tired of the extra food prep my Hildegarde fast required. It’s probably why I was so tired: I was hardly eating. I was so sick of the few things I could eat, I wasn’t eating much at all. Tony reminded me I was the same way at the end of Lent last year as the Whole30 was winding down. It was a good reminder that Lenten disciplines should not be chosen lightly. Certainly, eating/fasting like St. Hildegard and reading her books were good, but at the end of the day, once the novelty wore off, all that was left was hard work and offering up. I’d forgotten how stressful it was to cook everything from scratch with a limited number of ingredients. It felt like most of my day was either spent cooking or searching Pinterest for different ways to cook beef or root vegetables. And while I’d never thought of myself as an emotional eater or someone who eats a certain way out of habit, not being able to eat or drink certain things at certain times made me very angry. I actually started drinking decaf coffee the last week or so because I just wasn’t holy enough to offer up the frustration and my bad mood affected our whole morning/ afternoon/ evening. So anyway, next year, somebody stop me if I start talking about doing something radical with my diet. Although I might see if Tony will let me retreat to a cave in the desert for 40 days.

No foolin’! New Quick Takes logo! Right click and save!