As a Catholic blogger I’m pretty sure it’s a mortal sin to not write about the election of a new pope….. but there’s no canon law that says it can’t be in Quick Takes form, however random, or long-winded,  that form may be. If you’re tired of reading such reflections, just skip right back to Jen’s. I won’t be offended.

1. It was sunny and mild, with a bright blue sky and cool gusty winds. Typical March weather. A typical Wednesday morning. Everyone slept in except Teddy and I, and we rushed around all morning to get ready for a lunchtime playdate. Black smoke around 6 :30 a.m. on the second day of the conclave meant no pope.

2. We arrived only a few minutes late to our playdate and for two hours we ate and laughed. I talked homeschooling and baptisms and on possible pope contenders. Teddy, you wanted chicken nuggets except when they were handed to you. Fulton you let us know when someone accidentally put risqué spanish music videos on the TV. Edie, Addie and Byron, you were blissfully absorbed in Legos, making videos, snapping photos and running through the woods. Only as we prepared to leave did we remember to check EWTN to see if smoke was blowing.

3. The crowd in St. Peter’s was immense. It was raining and dreary, but there people stood, shoulder to shoulder waiting for a sign. I was warm and comfortable, yet I envied them. At last we said our goodbyes, left and headed home. Would the announcement come in the 15 minutes we were on the road? I started loudly giving directions as soon as we pulled in the drive. “Everyone take something. I’m getting Fulton inside then bringing up EWTN on the computer. Addie can you get Teddy?” We sprung into action. I should’ve known something big was coming when Teddy asked to be put down for a nap and within five minutes of arriving home, was fast asleep.

4. I sprinted up the stairs, brought up EWTN and opened a small window showing the smoke stack. No smoke, just rambling Italian commentary. Addie, you were on watch with Byron. I went to change Fulton’s diaper and put him down for a nap. Mid-way through a messy change, you started to scream, “Smoke, smoke! But it’s black…or….” I hastily slapped on a diaper and sprinted to the steps, and heard in Italian, “Bianco, bianco!” I started to chant as I took the stairs two at a time, “Bianco, bianco, bianco, bianco!” And as I looked at the screen, “White, it’s white! We have a pope!” And we all erupted in cheers, except Fulton. You were still lying in bed downstairs yelling “Mama! Is there smoke??” Sorry bud. 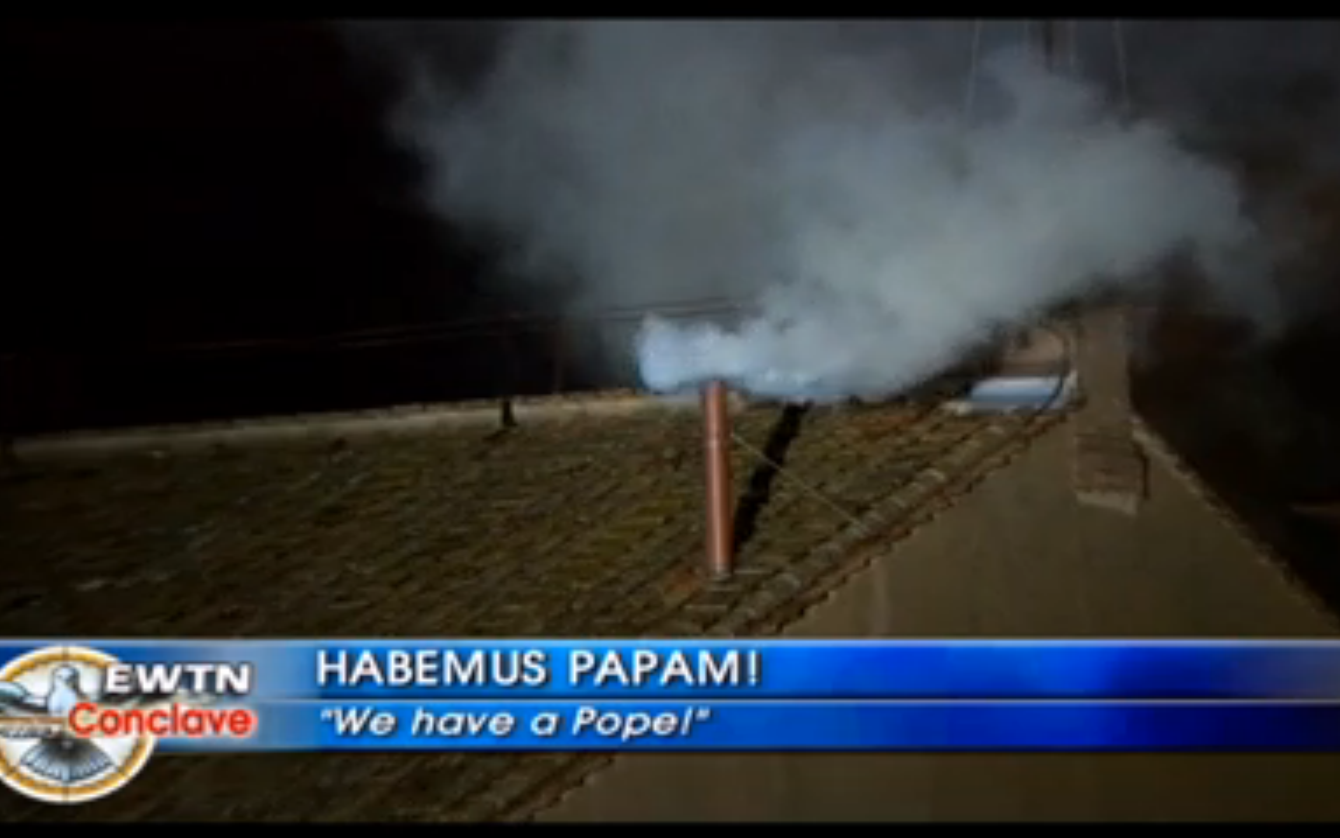 5. I raced back down the stairs, scooped Fulton up in a fresh diaper but no pants, and hauled him up the steps. We sat together in front of the computer and I opened a chat window in Gmail and messaged Papa. I updated my Facebook status. It was 2:10 p.m. Fulton, I asked if you wanted pants but you insisted you were fine. We all sat together for almost an hour and waited. It must have seemed like an eternity to you kids. I thought back to the last time I sat and waited to hear the words ‘Habemus Papem!’ We were only a family of four. I took a picture of the five of us crammed around the desk and snapped screen shots. I wanted to make sure you would never forget this moment. Every time the crowd screamed I’d shush you and we’d listen intently. Finally, Cardinal Tauran announced our new pope and all I could say was, “Wha….?” All I caught was Francis. I had to wait for the commentators to tell me or to see his face to figure out who the new holy father was. It was agony. 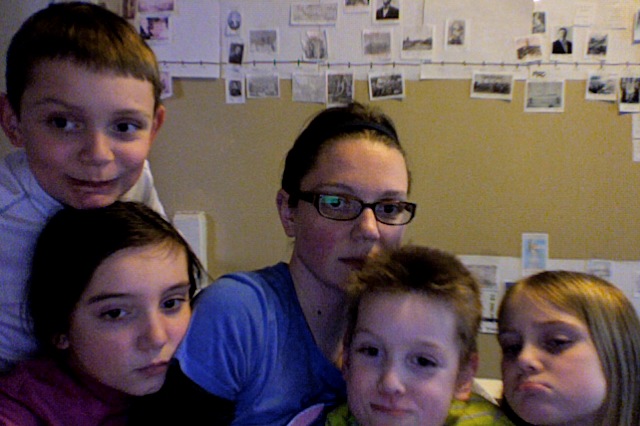 6. We continued to wait; I had the media player on full screen and didn’t want to miss a moment, yet I could hear the pings of Papa sending messages to the hidden chat window. Did Tony know? Finally we got our answer and we watched him emerge on the balcony. Cardinal Jorge Bergoglio, now known as Pope Francis, walked out and greeted the crowd as a man completely overwhelmed. I did not know what to make of it. I did not have the rush of euphoria that I did when I watched Pope Benedict XVI stand on that balcony eight years ago. My emotions were so mixed; I hope you did not notice. Papa and I immediately started searching the web for information and IM’ing each other, pausing to listen to the new pope’s first words, his request for prayers and his blessing. Finally Fulton, I put you down for a nap. The rest of you dispersed, but not before we found Argentina and Buenos Aires on the globe. 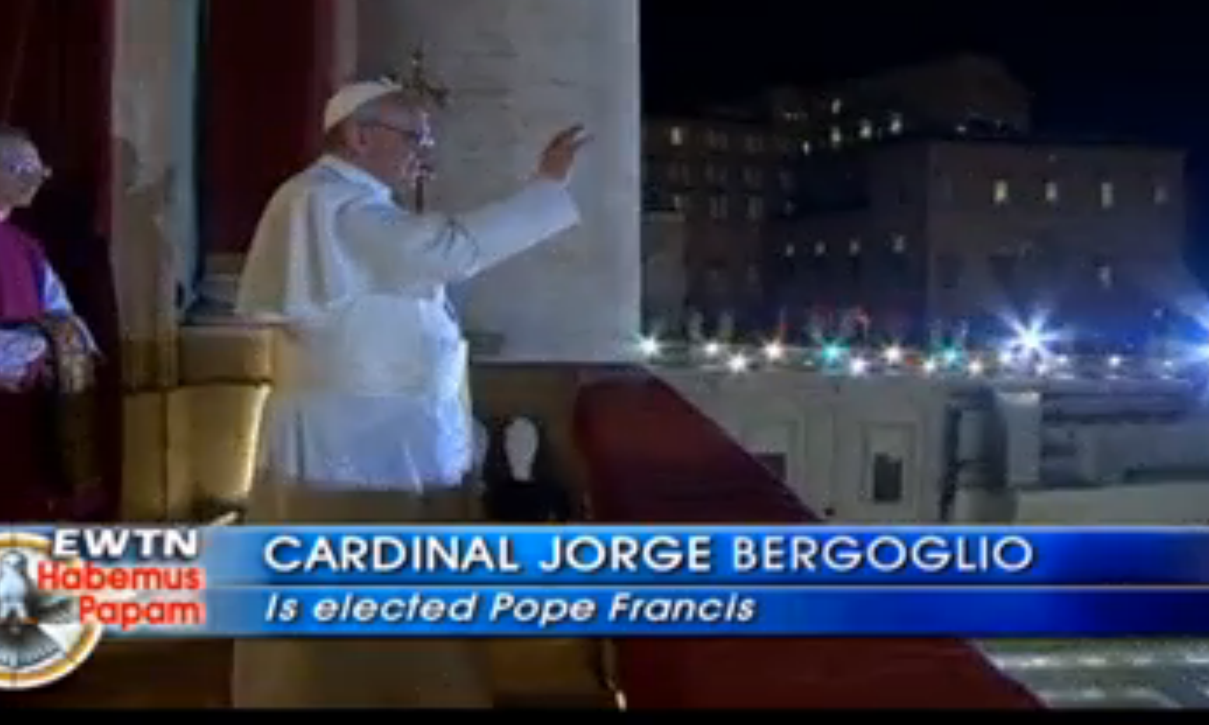 7. It was a historic day. One in which I have never felt so small and yet a part of something so great and so big. Just one mom in New Jersey sharing a moment with the whole world. My faith grew tremendously under Pope Benedict XVI and it was not until his successor was announced that I felt Benedict’s loss more than ever. I wanted another Cardinal Ratzinger and I wanted Benedict XVII. I wanted everything to continue as it had been, as if the whole of my faith rested on one man. Thankfully, the Holy Ghost leads the Church, not I, so I can trust in the conclave’s vote, even if the elected is not my “top pick.” From where I sit today, Pope Francis looks to have the makings of a good and holy pope. I am hopeful for the future of our church but I must be honest that I am afraid of change, and I cringe at every comparison of Pope Francis to Pope Benedict as if it were an insult. Red shoes or black shoes, bus or private car; neither is better or worse. Pope Benedict XVI was my pope and embracing Pope Francis in the same way will take me time. As you read this in the future, I hope I will have come around.

Addie, Byron, Edie, Fulton- may the memories of March 13, 2013 remain with you always and help you to understand in some small way, the glory and majesty that is the Holy Roman Catholic Church and why I love Her so much.