Time for some quick takes. Right out of the starting gate,

1. Maybe you’ve noticed I’ve been blogging with some frequency this week. (Yes I have and yes, you’re impressed.) The secret to this burst in posts is waking up at 5 a.m.

I know, I can’t believe it either. A week ago, I would’ve gone with steroids too, but here I am, hammering out some takes before the sun. In fact I was only just telling some friends that I need my quiet time at night, that I could never get up early. But such proclamations usually indicate a change is coming so when I read ‘Simple Blogging’ by Rachel Meeks this weekend and she mentioned getting up early to write vs staying up late, I took notice. Really, before kids, I was a morning person. In college I always got up extra early to write on the morning papers were due rather than pull an all nighter. There were fewer distractions and I wrote faster and easier. Plus, making time for this whole running thing was forcing me to get up early anyway, but not early enough to afford me a shower. I hate walking around all morning in my sweaty running clothes trying to squeeze a shower in between subjects. So I decided to try getting up at 5 and it’s been great. By the time the kids are awake and making demands, I’m dressed, fueled up on coffee and I’ve put in at least a good hour of writing. I’ve found I’m just as tired at 9 p.m whether I wake up at 5 a.m. or 7 a.m. but now I don’t need to force myself awake to write into the wee hours, I can just collapse in bed with a book and go to sleep. I tend to fall asleep fast and immediately enter a death like coma, or says my husband who never disturbs me when he comes to bed. On the other hand, if something wakes me up after 3:30 a.m. I’m up for a couple of hours anyway. This was certainly not something I could’ve attempted with a baby, and I could easily get off this schedule if someone gets sick, however I seem to have found my natural rhythm and I believe it’s also contributing to my improved attitude during the school day.

2 I can officially announce that Teddy is potty trained. We began at the beginning of August and it’s been pretty easy despite the few bumps the second round of stomach bug threw our way. What cemented it was during our drive home this weekend when Teddy proclaimed he needed to go potty and I told him to just go in his diaper and, of course, he wouldn’t. So we had to pull over, pull out the toddler toilet we keep in the van and let him tinkle. But for all the money we’ll now save on diapers, we’re not saving any hassle. I feel like a fire fighter waiting for an alarm. Teddy just screams throughout the day, “I need to go potty!” and I need to drop anything and everything to get him to that toilet. And then, because he can’t stand, I need to lay him down to pull up his pants, which is fine at home but gross as hell when we’re traveling. So now, instead of allowing him to fester for hours in soiled diapers until it’s convenient to change him, my day is dictated by his excretions. And he won’t stop asking for M&Ms.

3. Over the weekend, we finally took Fulton to the demolition derby for his birthday. I might have enjoyed it more than the monster truck rallies we attended in past years. Having sons has opened me to a whole world of entertaining destruction and mayhem I didn’t know existed. There were some rain showers, and Fulton wanted to leave before the fireworks but all in all, it was a successful evening. 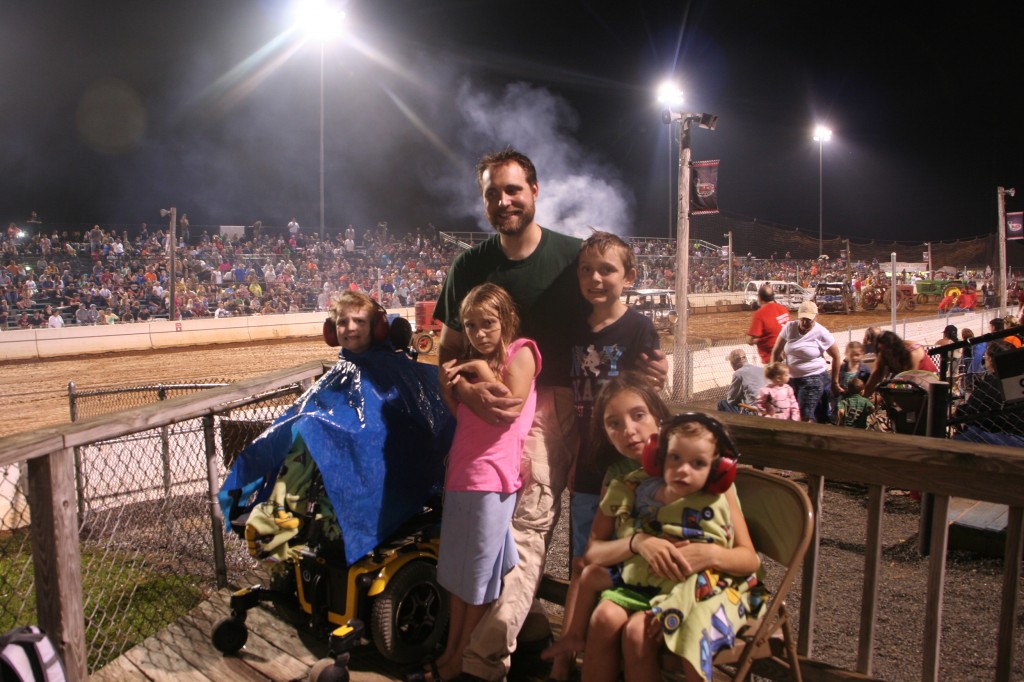 Soaking wet and bubbling over with enthusiasm! Edie’s taking one for the team.

4. Next weekend I’m planning to run my second 5K. It’s a mud run loaded with obstacles, including a vertical wall, which does not appeal to my delicate female sensibilities at all. But it’s the only run that fit my schedule this month so I’m competing despite my fear of falling face first in the mud and being trampled. And how is any one going to read my snazzy t-shirt if it’s covered in mud? Can I compete in a clear plastic rain poncho? So much to prepare for.  Have you donated to my 35K For SMA Campaign yet? Maybe you don’t trust me. That’s okay, I understand. But would you please consider donating directly to one of the four charities my efforts will benefit?  SMA It Forward, The Getty Owl Foundation, Unite 4 Peyton, Marshall’s Miles, all give directly to families raising a child or children with SMA. And what about a social media shout out? Rather than sharing another meme, why not share the link to my fundraiser page? It’ll be your good deed for the day.

5. Since my hobbies include biting off more than I can chew and driving myself insane, I signed up to help lead my kids scouting group. I’m trying to plan out some upcoming meetings and in going over past meetings I was overcome with the urge to roll my eyeballs. So many cheesy games and hokey religion stories! Can’t we all sit around discussing an encyclical while lashing together a bridge? But when I asked Addie what she loved about the meetings she unequivocally said, “The games! And I like the cartoons they hand out.” Obviously, I seem to have forgotten what it’s like to be a kid and was on track to being the least popular leader ever.

6. Every year I spaz about some aspect of my children’s education that I feel is being completely neglected, thus rendering them incapable of becoming functioning adults. Last year it was geography/map skills, this year, it’s the bible. Sure they know their prayers and catechism but can they list all the Deuterocanonical books???? So anyway, I thought we would listen to scripture during lunch thanks to Libra Vox, a website with free audio books. (I know, right? Jump all over that it you haven’t already.) Yesterday, we started with Genesis and I’m pretty sure we got through “In the beginning…” before somebody went off on a Star Wars tangent.

7. Wow, these were some long takes. See, when I wake up at 5 a.m. I’m a freaking machine! I’ll spare you a seventh long-winded take. Swing back to Jen’s to enjoy people who understand the definition of “quick”.