It was not my intent to skip a week of blogging. Thankfully, in my absence, Heather has stepped up her game which not only fills in the funny void left by my absence, but also sets the humor bar ever so much higher. So, thanks for that…I guess. 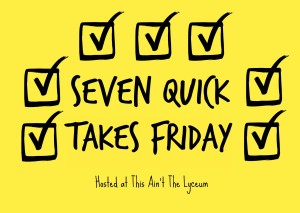 1. I always hear people say, “I could never homeschool, I don’t know how you do it.” Well, after two weeks of summer camp let me say I could probably never be a school mom. Two weeks of getting only one of my children out the door by a set time is killing me. Killing me. Last week Edie’s day camp was at least only three miles down the road and I could drop her off in my PJs. But this week, Byron’s camp is 40 minutes away and I have to get out of my car to check him in! It means I have to be presentable by 8:15 a.m. and since I won’t be home until after 9:30 a.m. it means I have to get a bunch of Fulton’s stuff done before I leave. Thankfully, the bigger kids will pack their own lunches, so long as I overlook the glut of Oreos and tube yogurt. Tony says if I had to do this everyday I would get used to it but I’m pretty sure it would be the death of me. I need to ease into my day, especially if I’ve had a rough night’s sleep. Even before kids, when I was working outside the home, I took my time in the morning. And sort of related is all the time I’m spending in the car; how do people do this??? So anyway, homeschooling is hard but school moms, please don’t sell yourselves short. I could never do what you do. You must have TONS of patience.

2. Last week, I asked Facebook and Twitter to help me come up with my Seven Quick Takes. My friends were very prolific though, and I couldn’t answer all their queries in one post. Specifically, Bonnie asked, what do my husband and kids think about my rapping? You know, it never occurred to me to ask them so I finally did. Three of the kids didn’t really give me answers; more like distorted facial features. Addie said, “Well, so long as I’m not there [when you’re rapping.]” Byron said I could quote him as a puking emoji face and Tony, a man who’s known me since we were both seventeen quipped “I just figured it’s par for the course.” Yes, there’s not much I can do to surprise him any more.

But for all there snark, the kids all laugh and smile when they see other bloggers posting videos of my performance or when they hear Jen mention me with enthusiasm on her radio show. I don’t forsee any of them embarking on a hip hop career, but I seriously doubt they’re as embarrassed as they’d have me believe. Which equals lower therapy bills down the road I’m sure!

3. With Addie away at camp, and Byron gone for most of the day, I’m trying to spend more quality with Edie, my poor, neglected middle child. That means tons of craft projects, heaven help me. On the kitchen counter, in the school room, on the dining table, all. over. her. bedroom; pretty much anywhere there’s open space. We got a huge box in the mail yesterday so I think today we’re working on building a Barbie Dream House now. (I’d take a picture but then you’d see what a disaster this place is.) When I’m out running around or trying to calm down her enthusiasm, I’ve been letting her satiate her appetite on My Froggy Stuff videos. If you have a child into dolls and crafts, and they don’t know about this site, it’s probably going to blow their minds. Have glue and cardboard at the ready.

4. We’ve made several trips to Ocean City, NJ recently which means walks on the boardwalk and relentless demands for money. Reminding the kids that they spend all their money at Dollar Tree months ago only makes their wails all the more pitiful. At dinner one night, we were brainstorming ideas for them to come up with more cash. Someone said ‘lemonade stand’ to which Byron replied “We don’t make much on that. What about a soy sauce stand or something. We have plenty of that.” Rather than discourage him, I’m totally trying to convince him to create some sort of used condiments stand because, really, how great would that be? 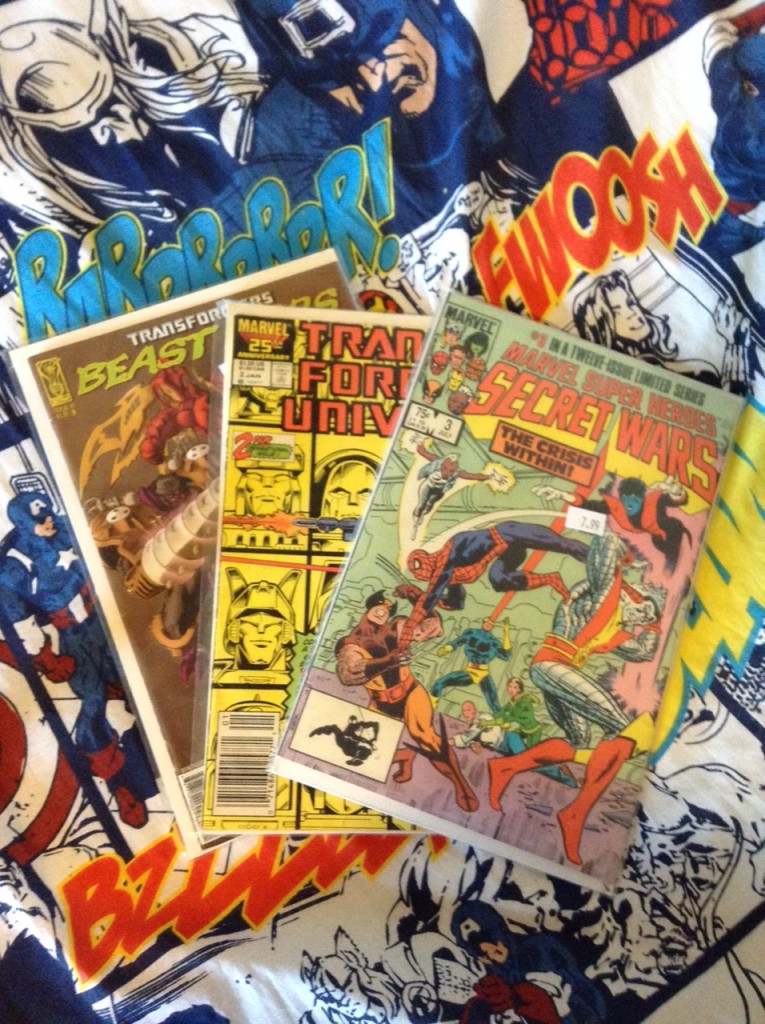 5. Also in dinner conversations we discussed legally changing one’s name. Teddy would like to be addressed as ‘Spiderman Optimus Prime’ from now on, even though I told him it doesn’t work that way.

6. Later in the week, Teddy started telling a story and mentioned he walked somewhere (which is not uncommon for him to say) and Edie abruptly cut him off to correct him and say. “No you didn’t. You can’t walk.” And then Teddy replied, still laughing at what’s sure to be a hilarious story, “Oh that’s right, I forgot. I drove…” and continued his tale without missing a beat. I was mortified. Do I reprimand Edie for pointing out that Teddy can’t walk? Do I prevent Teddy from saying he ‘walks’ places?? Can I, in good conscience, laugh at Teddy’s story now? UGH! I’m so not politically correct enough to be a special needs parent! This is why in spontaneous conversations with people I can’t be trusted to not say offensive things.

7. Radically switching gears to end on a less awkward note.

We have a huge melon growing from our compost pile. I’m thinking pumpkin? We didn’t do a garden this year and I’m not the best at remembering to compost all our kitchen scraps so this is a pretty neat development. However in past years when we tried to plant pumpkins, they all got some weird rot thing and died so I’m trying not to get my hopes up. …in the hopes that being pessimistic will yield positive results. 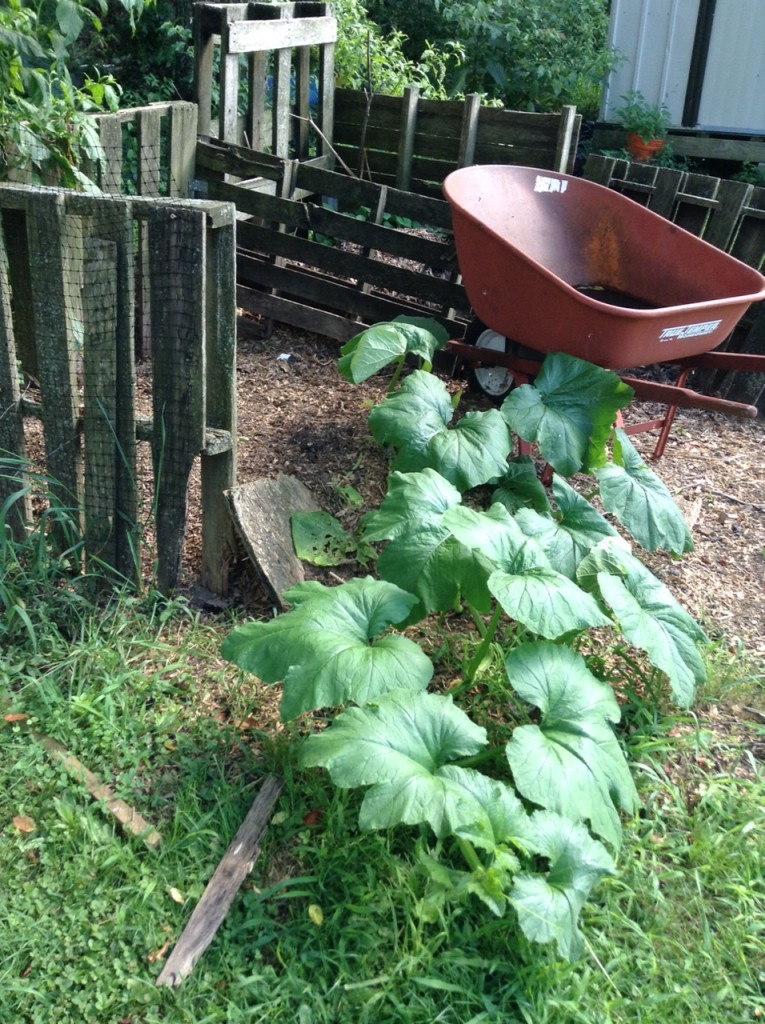 How was your week? Can you believe we’re coming up on the last week of July?!? Link up your ponderings on how time really is moving faster and be sure to include a link back to this post so your readers can find the rest of the Quick Takes! I look forward to reading your posts!