Well, I had three potential topics for this week, NONE of which panned out the way I expected. All were going to be very exciting and WOW inducing and I’m feeling a bit of, “Why can I not get my life together since I’m almost forty?” Not having control over several big projects in my life means I’m trying to find smaller ways to bring control and order to my day with mixed results. But while my kids are using all the computers in the house to take their online classes (which were supposed to give me more time to work on my stuff) I busied myself with other things.

1. We finally got the harp out of our old upright piano and moved it to our deck. It only took ten months. The trick to getting out the harp? We had to lay it down because the metal harp wrapped around the bottom of the piano and contained several screws we had to remove. We also had to remove every tuning peg. It’s still not finished, but at least it’s out of the house. 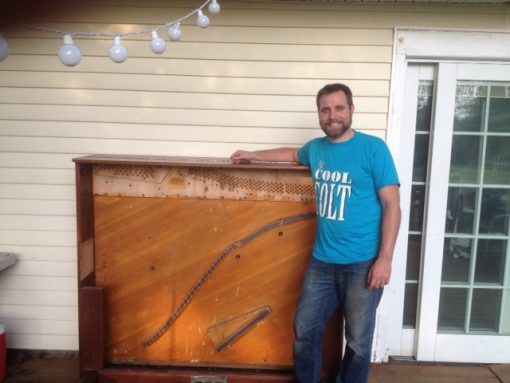 I don’t know what makes me happier; that the piano is out of the house, or that my husband owns, and wears, a Colt 45 t-shirt.

2. We used the piano as a serving bar for an awesome Italian restaurant themed 40th birthday party for Tony and I last Saturday. My birthday isn’t until the end of September, but with Fulton’s surgery on the 11th, we figured it’d be better to do a party earlier rather than later, especially since we wanted to eat outside.

The menu and theme was based on a menu we have from Mantoan’s Restaurant, which was a real restaurant run by my husband’s grandparents in the fifties and sixties in Illinois. Everyone had to dress up in their best cocktail party / Mad Men attire. We offered before dinner drinks, appetizers, a family style Italian dinner with Chianti, and after dinner cordials with cannoli (and gelato for the gluten-free among us). It was adults only except for Byron who mixed drinks and Edie who bussed the table afterwards. Everyone had a great time and I think outdoor dinner parties may become the next big thing. 3. I hung (hanged?) a shelf where the piano used to be and decorated the hell out of it. I’ll never dust it, but it looks awesome right now. I think it’s the first time since we moved into this house that all the walls are decorated. I hung a couple IKEA lamps next to our trash picked couch, along with two new throw pillows and Edie was all “That looks like a magazine!” and I was happy that I could make their childhood home a little less hobo-esque.

4. We started school this week and I should probably do a curriculum post but it didn’t seem worth it to devote an entire post to:

Fulton, 5th grade, starts at a new school for a couple days next week, although I have yet to hear about transportation or even who his teacher will be which has me a bit concerned.

Teddy, 2nd grade, will be back at the local elementary being Mr. Popular for the second year running.

Maybe I’ll get around to listing out all the courses and what not, or maybe I’ll just do a review of how it’s all going with all these online resources after we get a semester in.

5. Since I knew I was outsourcing a bunch of classes, I put off a lot of school prep until the last-minute, which means we’re still waiting for textbooks to arrive. I like outsourcing the teaching, but I don’t like having to buy all these very specific books and editions. I actually changed one of Byron’s classes because I couldn’t find a book he needed at a reasonable price. In fact, someone in a Catholic curriculum group was trying to price gouge a used copy of a $70 book for more than $160!! And signed her post with ‘Blessings of Christ to you.” Just…no.

6. I also still need to buy all the very specific school supplies for Teddy. Last year I followed the list to the letter and they sent stuff home saying, thanks, but we’re good! And I’m like WHAT?! Why did I just hunt down the last “three six packs of FINE POINT BLACK ONLY LOW ODOR ANTI-AGING PANIC REDUCING LOW SLACK STAINING ABILITY dry erase markers”  if you were going to send one home??

7. I had to return ‘War and Peace’ to the library without finishing it. I found I hated taking it places (so bulky!) but with a book that size, I want a physical copy so I can see the progress I’m making (It’s not the same to see 35% at the bottom of my Kindle screen.) I will probably buy the Oxford translation in time for the hospital stay, and break it up by reading a few other books that have been siting in my bedside pile.

How’s you week? Write it down then link it up below. Be sure to include a link back to this post so your readers can find the rest of the Quick Takes. I look forward to reading your posts!