2. BUT, thanks in no small part to your prayers, Fulton has not caught the same bug as Teddy, Byron, Edie and Addie. He did manage to somehow pick up an ear infection despite having no symptoms of a cold or fever, but, I’ll take it over a respiratory illness! Literally, I would personally take an ear infection over Fulton getting sick. I would personally undergo a bunch of unpleasant things to prevent Fulton from getting sick, but that is another story.

3. Teddy perked up Friday, despite horrible numbers before bed on Thursday. He’s continued to go up and down but over the last couple days, he’s started eating more, sleeping less and coughing less. Meanwhile, Edie and Addie have regressed and are lounging around in pajamas more than the usual amount. Byron had a rough weekend, which sucked because we had plans to go to Ocean City, NJ. But, I guess if you have to be sick, it’s nice to have the option to look at the ocean and smell the salt air when passed out in bed. (You didn’t think I would cancel my trip did you?!?)

4. There was a comic con on the boardwalk which we’d planned on attending for months. I learned a couple of nights prior that Lando Calrissian (Billy Dee Williams) would be appearing! When we arrived Friday evening and I realized I’d forgotten my cell phone’s charging cord, I carefully conserved my phone’s battery so I would be able to snap a picture. Unfortunately, I didn’t realize it would cost $50 to take a photo with him, and an additional $50 to get an autograph. This is pretty typical at comic cons, so I shouldn’t have been surprised, but I guess I just assumed that Lando wasn’t commanding such high rates any more. We enjoyed the event none the less, especially a light saber show put on by “Lucasfilm’s preferred lightsaber performance group”. (Who knew that was even a thing?) Fulton went dressed as Batman and had fun refusing pictures with Batwoman, the Joker, Catwoman and the Riddler.

5. Did you see the uproar in the news about Mark Smith, the man who was allegedly kicked off an American Airlines flight due to his disability? Oh, probably not because the story never made it into the national news unless you consider this one blog post written on The Mighty. But I’ll bet you heard all about the gals who couldn’t board a United Flight due to their leggings. American Airlines says that Smith’s wheelchair didn’t fit in the cargo hold of their plane, though he claims they didn’t tell him that as they wheeled him off the flight. They did get him on a later flight, so he did make it home with his chair. Look at these screen shots: 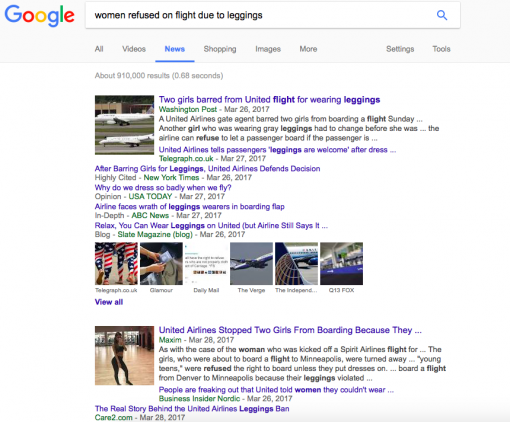 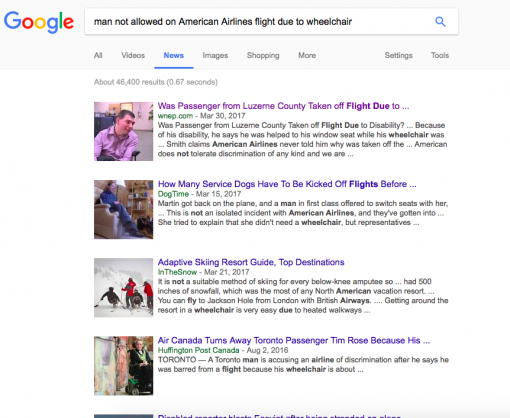 Look at all the headlines over leggings…LEGGINGS. And then check the news stories for a man kicked off a flight because his wheelchair took up too much space. Forget all the luggage from everyone else on board. There was not enough room in the cargo hold and so the disabled man had to get off. Where is the media outcry? The trending Twitter hashtag? How can we muster such outrage over “legging discrimination” and ignore actual discrimination? United had to bend over backwards to make amends for leggings-gate, while American seems to be making a habit of kicking disabled people off their flights for no reason, and people hardly shrug. When I saw Smith’s story shared by some of my friends on Facebook I read one comment by a shocked women who said there had to be more to the story otherwise we should all be afraid to fly if we were disabled. And I had to answer that I’ve read many stories about the discrimination disabled people face when traveling. I wouldn’t say it’s the norm, but it does happen, a lot more then illegal leggings, and it doesn’t seem to get people nearly riled up enough.

Steps down from soapbox.

6. Next week begins our protracted spring break. When we started homeschooling, we schooled year round; three months on, one month off, and it was great. But as the kids have gotten older, summer camps, activities, family gatherings, all started encroaching on our schedule. This year was the final straw as we had to adjust to Addie’s school schedule, and now as the end of her school year approaches quicker than ours, we’ve decided to shorten our spring break from a month, to two weeks, so we can be done in June. I hope it feels like enough of a break for us. And I’m already concerned with what they’ll forget over a longer summer break. I’ve warned a couple of the kids that math will still be happening. When I’m off school I like to be OFF SCHOOL, so I hope that continuing any subjects won’t create situations that result in me throwing a lot of workbooks in the ocean.

7. Also-next Friday, Good Friday, they’ll be no link up. Go to Mass! Don’t eat! Kneel for prayers on broken glass! Whatever you want! Just don’t look for Quick Takes. This is plenty of warning so no tweets at 1 a.m. next Friday asking if I’m dead. I’ll try to put up a placeholder post just in case. I’ll TRY.