It quickly became apparent that many of my goals were too non-specific and thus, worthless. Those that were more concrete, actually happened where as the vague resolutions were too hard to incorporate. Less Facebook? Like, not in the bathroom? Or not during the morning school hours? What is less? And since I didn’t hash out those specifics when I wrote the resolutions, I didn’t take the time later and usually decided, eh, things are fine how they are.

This year, I knew I wanted very specific resolutions. Even if I fall short, I know what the ideal is. But then the task of choosing my resolutions began, and in trying to figure them out, the idea of an examination of conscience popped up. Just as all Catholics review their sins before confession,  I sat down to review my habits, and regular sins, of the past year. As I thought of things I wanted to change, I realized I was looking at a classic case of envy with one problem, and sloth or greed with another. Soon I had a list of the seven deadly sins written down, and the contrary virtues. My goal for 2014 has become not only to root out bad habits rooted in the seven deadly sins, but to grow in virtue. Seven deadly sins? Seven contrary virtues? Sounds like Quick Takes material!

Here’s a big one for me. I want to stop answering the kids in anger, annoyance or with sarcasm. Although I don’t want to be the kid’s doormat, I’m praying for meekness. When tempted to respond to a smart remark, complaint or question I’ve answered 50 times with sailor talk, I’m praying for the ability to take a deep breath, and not snap back. I’m going to tell the kids they can remind to be meek and I’m pretty sure that will keep me from forgetting my resolution…EVER, like, until I die.

I am greedy with my time. I hoard it. I want to write, read, shower and go to the bathroom with the door shut. Often, I dismiss the children’s requests to play so I can do something on the computer. While I deserve some “me time”, too often every minute I’m not schooling, cooking or running a household I want for me. This year, I want to be generous in my time to my children, and husband. I’m praying I can put off what I want to do and give that time to my family joyfully.

I don’t feel the need to reveal to publicly all the ways I suffer from envy, but suffice it to say my husband has been heard to utter “I don’t remember you suffering from envy before you had a blog.” Hmmpf. Now, rather than vent to my hubby, when I start to detect a hint of envy, I’m going to pray for the person it’s directed at. I’m going to offer a prayer of thanksgiving for their successes. I’m going to pray that I can be happy when someone I know receives something nice, or gets to travel, rather than sulk and allow myself to get caught up in ‘what ifs’.

In the end, many of my complaints about school, our house, etc. can be tied to wishing for something better rather than being content with what we have. I’m focusing on being thankful, specifically in helping me overcome the frustration of living in a less than ideal house.

I’m so, so very bad at maintaining a regular prayer life. I’ve actually set reminders on my iPod to help me remember to start and end each day with prayer. I know after a few weeks, it will hopefully become a habit, but just getting to the point where I won’t need an ap to alert me will be the trick.

So these are virtues I’m specifically focusing on: meekness, generosity, brotherly love and diligence, plus trying to be thankful in all things. Here are the remaining vices and virtues. Where do your resolutions lie?

My remaining resolutions include finishing my book and submitting it to a publisher or literary agent by July 1, ( Certainly a practice of diligence, but hopefully not at the cost of being generous with my time.) and several small specific goals for my blog and my 35K For SMA campaign.

I still feel like maybe some of my resolutions aren’t specific enough, but I’m hoping that when faced with a situation to answer sharply, or skip prayers, I’ll be able to choose the more virtuous path, with or without a nudge from a family member or an electronic alarm.

Guess this means I’d better get my butt off the computer and back to the kids. While I’m off setting three more alerts on my iPod, swing back to Jen’s for Takes that will get 2014 off to a stupendous start.

PS. I’m dubbing 2014 the year of the Manticore, just because. My beast of the year laughs at your word of the year. Keep smiling, and stay virtuous people! 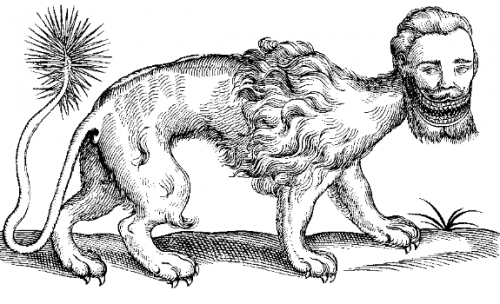 Taking the ‘stache trend to another level. Rock on Manticore!