Since we’re more than halfway through the school year, I thought, for once, that I would actually do a mid-year follow-up on what’s working in our homeschool. (There’s also some things not working, but that’s a post for another time.) You can read about my 2016-17 curriculum choices here for comparison. 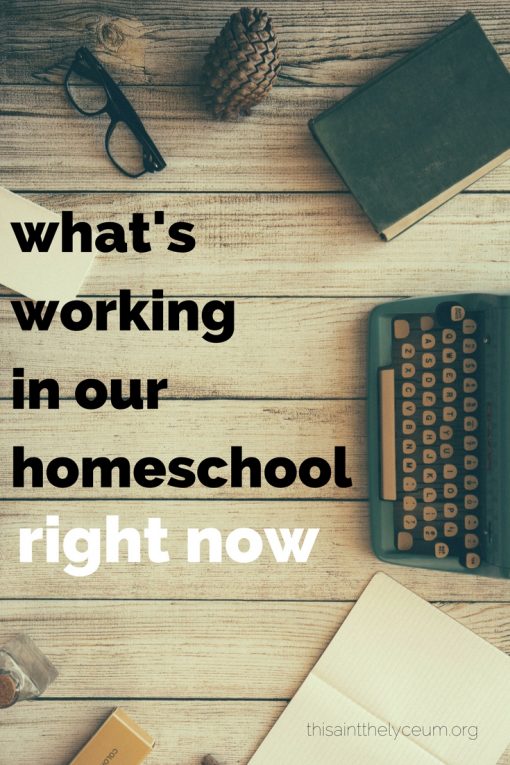 1. Addie is excelling at Queen of Heaven Academy. She’s getting all A’s and, after only a few growing pains, is managing her academic life independently. I get a weekly email of her assignments and grades, but because she is very motivated to do well (whose kid is this?!?), I don’t need to follow-up with her all that much. There’s been a few missed assignments and bombed tests, but I generally don’t interfere. If she has a problem, I encourage her to email her teacher. If she doesn’t know something, or forgets an assignment, I let her deal with the consequences. She’s learned to manage her time, complete work on time, study when necessary, take notes and ask questions. There’s been no hand holding along the way. And perhaps I’m too hands off, however, I’m glad she’s been able to step up and take the initiative. It’s a demanding curriculum, and there are times my husband and I question if it’s too much busy work, however, we cannot deny that she has risen wonderfully to the challenge and is getting a top-notch classical education as a result.

The only downside is being tied to a school schedule. It’s messed with our breaks, family activities and I always seem to have one less pair of hands around to help. However, despite the amount of work and imposition on our  homeschool routine, we are pleased with how Addie is doing and plan to enroll her next year. (Lucky for Addie, Logic is part of the 10th grade curriculum.) If you’re interested in enrolling, open enrollment will start April 1. And if you have questions, don’t hesitate to send Queen of Heaven an email, they are SUPER responsive and will get back to you ASAP.

2. Ultimately we decided not to purchase CHC’s new art program and instead invested in Artistic Pursuits. I like that it covers art instruction, appreciation, and some history all in one book. Bonus-the kids enjoy the program and they can work independently while I’m helping Fulton and Teddy paint pictures of a volcano destroying Pompeii (Fulton’s request).

3. Libra Vox recordings!!! (Many of which you can also find on YouTube.) For once I’ve shown remarkable consistency in making Fulton and Teddy listen to literature. I know it’s not quite the same as me reading aloud, but considering I don’t enjoy reading aloud, it’s the next best thing. We finished Mary Poppins and Peter Pan and are working through Beautiful Stories from Shakespeare by Edith Nesbit. The boys sit and listen when I read Shakespeare on Fridays (the one time I read aloud, and God help you if you don’t pay attention), but even though it is a modern translation (No Fear Shakespeare) most of it goes over their heads. Watching the plays helps, but Nesbit wonderfully retells Shakespeare, and I think it provides a good stepping stone to rereading these same stories when they’re older. (The older three have read similar stories during year three of our history cycle.)

4. Schoology is a free learning management system that can be used by teachers and schools to stream line lessons plans, assignments, homework, etc. It would be a bit tedious to upload everything as a homeschooler, especially if you use different materials for different children at each grade level, but I’ve found it works great for creating and checking writing assignments for Byron. He’s using Writing with Skill and each week I enter in his assignments on Schoology. He checks the assignments on his Kindle or on the desktop, and he can type up his written work directly in the program. I get a notification when it is submitted and I can check it, comment, and grade it from wherever. It’s helped overcome problems with sloppy handwriting, improved his typing ability, and this way saved documents don’t get lost on the desktop in some unknown folder. There’s probably tons of other features I’m missing out on because I use it in such a narrow way, but I can see it being a real asset to someone designing a homeschool co-op class or online course.

5. I used to strongly enforce a school routine for the older three. This year, due to her online classes, Addie follows her own schedule. I tried to stick to the usual routine for Byron and Edie but I found Edie wanted to start earlier in the day while Byron wanted to ease into the morning and start at our usual time. It’s been slightly chaotic juggling the younger boys morning care and school whilst keeping an eye on Byron and Edie, but for the most part, they still successfully complete their assignments as they work at different times and different locations. (Edie prefers the couch or floor rather than the new standing desk.)  Allowing the older three more flexibility in their school schedules has definitely opened my eyes to differing aspects of their personalities.

6. Using Reading Reflex, Fulton has made slow and steady progress. After trying all the reading curriculum I had on hand, plus several online programs and apps, he seems to finally be retaining information, reversing letters much less frequently, and remembering more complex sounds like ‘sh’. He actually tries to sound out words on his own when looking at books now and doesn’t get discouraged by his attempts. He can complete the lessons using magnetic letter tiles and typing up words on his iPad. Reading selections are included in the text. Obviously, it is very parent intensive on my part. (In related news I’ve discovered loads of patience I didn’t know I possessed.) Reading Reflex is very methodical and there are even specialists who train in the method that can offer assistance to parents and students. If you have a struggling reader, it’s worth the low price you’ll find it for on Amazon.

7. Fulton also started using Montessori math materials. I did not succeed in tracking down an inexpensive Shiller Math set, however, I do have a friend who’s a Montessori teacher who is lending me materials to use with him, and most importantly, explaining how to use them. I love the way math is introduced in a Montessori school, but it was never something I felt I could replicate in my homeschool. I need to modify very little with the lessons to accommodate Fulton, and he is doing well with the materials. But, also very parent intensive, though there is much he can do on his own which makes him happy.

It’s also helped that we’ve dropped a few activities from our schedule for a bit. Despite starting our second trimester later than I wanted due to hosting orphans, it hasn’t felt as overwhelming as the fall, and the super nice winter weather doesn’t hurt either.

Any other homeschool questions? Don’t forget I offer homeschool consulting; I’d love to work with you one on one!