Be glad you’re reading these takes from somewhere other than right next to me and my pile of tissues. Hands down the most difficult thing about this cold is that I cannot yell at any reasonable volume, and thus, the kids aren’t taking me seriously at all.

I’d already planned a mid-trimester break, so thankfully I didn’t need to worry about school, but it was a crazy week none the less.

1. Sunday I only had the faintest tickle in my throat. I knew I was probably going to get sick, but I focused on the fact that our parish was hosting Bishop Athanaius Schneider. He said a beautiful Mass, and then gave a great talk on ‘The Social Reign of Christ the King’. Afterwards he took questions and made an effort to meet and take pictures with parishioners. Thankfully, a friend snapped a picture of him talking to Tony and I, and blessing the boys. All Fulton and Teddy wanted to know was when we were going home. Seriously guys? Someday they’ll thank me. 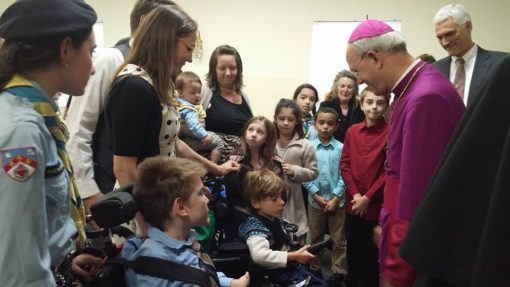 Here’s Teddy on what appears to be the worst day of his life.

2. When I manged to wake up Monday, I knew there was no escaping the bug. I put the finishing touches on Fulton’s Halloween costume in time for Tony to take everyone to our local MDA chapter’s Halloween party. Although I felt bad missing out, taking a virus to a party filled with MDA kids seemed like the worst. idea. ever. Instead I camped out in bed with a box of tissues, some NyQuil and caught up on some recent episodes of Speechless, ABC’s new comedy about a special needs family.

Speechless is the first TV show I’ve followed in years. But I find it’s worth time away from reading or writing, to laugh along with the DiMeo family. The fact that it’s a comedy means they can tackle some tricky issues about society’s view of disabled people or the dynamics in a special needs family without getting preachy. The exaggerated antics of Maya DiMeo as she advocates for her son JJ, or the politically correct school that goes overboard with inclusivity; we can laugh at the ridiculousness of their demands and claims, but hopefully see how ridiculous it is that special needs parents need to advocate like hell for their children to get what they need, and that places that promise inclusivity without actually offering something other than a garbage ramp as an entrance for disabled people aren’t inclusive at all.  The moments when the younger DiMeo siblings admit not getting the attention they desire, or Jimmy DiMeo’s honest talk with his son Ray about not caring what anyone things anymore because, after you get a horrible diagnosis for your child, not much else matters, hit the nail on the head, and will resonate with special needs parents in the trenches.

3. Halloween is Monday, which means our house is currently covered in cardboard and duct tape scraps. I saved work by purchasing Teddy’s costume (though I think I promised I would build him a weapon…uh oh) and Fulton’s I finished Monday which means I’m only overseeing the final construction of the older three’s costumes, which are moving more into the realm of cosplay. On Saturday we’re heading to a local Comic Con type convention which is where Addie, Byron and Edie will debut their costumes first, before heading out for treats on Monday. I’ll detail all the specifics in a future post, but it’s nice to see the kids taking the initiative on creating their own costumes, and no one shied away from a challenge. I’ve helped with some sewing tips, Goodwill repurposing and cardboard cutting /construction, but mostly just tried to encourage the kids to keep on top of their projects. I’m excited to see (and share) the final products.

4. – 7. Despite my cold, I was determined to keep two long-standing medical appointments. On Tuesday, I wore a medical mask and took Fulton for a two-hour hand brace fitting with an Occupational Therapist. It went well and we came home with new custom wrist braces molded from baby blue plastic with orange straps for one brace and red straps for the other. (Dressing like a homeschooler even in the orthotics department.) On Wednesday, Tony and I took both Fulton and Teddy back to Shriner’s Hospital in Philly to pick up new back braces, get new x-rays, and follow-up with the spine surgeon. Teddy’s brace is a rainbow tie dye pattern and Fulton’s is a small, grey and black diamond pattern known as ‘Carbon’, but that he prefers to call ‘bullet-proof’. Thursday, by default, was complain about our new braces day. I spent most of yesterday (with Tony’s help) taking braces on and off, adding moleskin, checking for redness and trying to discern when someone was actually in pain and when they were just messing with me. I’m considering investing in a polygraph machine.

If you don’t mind, I’m wrapping up early. How was your week? Write it down then link it up below. Be sure to include a link back to this post so your readers can find the rest of the Quick Takes. I look forward to reading your posts!