Grace-MWAH! Love her. Enabling me to slack once again, with the smug satisfaction that I will still be numero uno, if just for a couple of minutes. 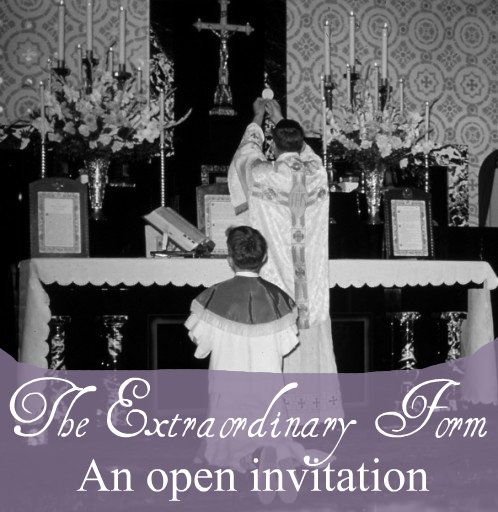 This week I am dedicating my takes to anyone and everyone who has even remotely considered attending the Extraordinary Form of the Mass. Yes, the Latin Mass. Our church still allows for those and whether it’s a strong desire pulling you towards all things traditional or just a faint curiosity about what the heck it actually is, I’m extending an invitation to YOU! There’s been a lot of talk around the web about Traditionalists lately. Who are these people?? Well, me and many of my friends for starters. (Thanks for the quotes guys! I was serious when I said I would post them.)

We’d all like to welcome you to your local Latin Mass. We’re not a bunch of crazies. I don’t think any parish or denomination can claim a monopoly on angry, holier-than-thou, uptight, or conspiracy theory believing members. And I challenge you to discover this for yourself.

1. Find a local Latin Mass at the Ecclesia Dei website and learn about the Latin Mass movement in your community by visiting Una Voca. Mass times are always subject to change so it doesn’t hurt to call before hand.

2. Dress in your Sunday best. The majority of Latin Mass attendees dress up for Mass. Men sport business casual at the very least, with dress shirts and ties the norm. Ladies, dress slacks are perfectly acceptable as are modest skirts and dresses. Plunging necklines, spaghetti straps, short shorts, socks with sandals; you won’t typically see these at a Latin Mass. Note: At daily Mass it is more common to see people in more casual attire as they are coming to and from work.

3. Ladies, a veil is never mandatory, so if you’re really uncomfortable doing so, don’t worry about it. If you like to try but don’t have a veil, there are usually some extra in the back of the church somewhere you can borrow. Read here if you’d like to veil and need some ideas

4. Children are expected to be well-behaved. You typically won’t see children at the Latin Mass holding iPods, Nintendo DSs or cell phones. Sippy cups or bottles, maybe some dry Cheerios; yes. Oreos and two liters of soda; no. If you’re child is screaming or wants to run, many churches have a cry room or lobby where they can let off steam.

We all have Sundays when our kids are wild hellians, and unfortunately, the nasty comments you sometimes get aren’t limited to the Latin Mass crowd. I actually have gotten the most positive comments from the members of my parish (You have such beautiful children! They did good today!), usually on the most horrible Sundays when I needed it the most.

“All should observe holy silence and holy dourness when in the nave of the church.” – David S. (See, we have a sense of humor!)

5. Be prepared to receive Holy Communion kneeling and on the tongue, and you don’t say ‘Amen’ before receiving.

6. Don’t try to follow along. For the first three to four visits, just sit and take it in. You will pick up what is going on and once you’re familiar with the liturgy, you’ll have an easier time following along with a Missal. Many Latin communities have proper sheets available so you can read the Epistle, Gospel, etc in English, and hymnal numbers are usually posted in plain view. And if you’re juggling multiple children, following along in a children’s Missal with them will probably be enough for you all.

“…it is possible to find familiar markers of the Mass and find the rhythm that way. In a blog post, I would point out exactly what those are (Kyrie, Gloria, Homily, Lavabo [Washing of Hands], Sanctus, Orate fratres, Consecration, Pater Noster [Our Father], Agnus Dei [Lamb of God], Ite Missa Est [Dismissal] are the ones that come to mind off hand).” -Kori R.

7. Be prepared to give a second chance. Years ago, our parish consisted of many older families who were not always the most receptive to new, young families with children (DAGGER EYES!), however, today we are bursting at the seams with young people. If you tried a Latin Mass before and something rubbed you the wrong way, I humbly suggest you try again. And trust me, no one is going to notice that this is your first Latin Mass, except maybe to offer you a missal.

“If you have preconceptions, pack them away. If you’ve only heard negative things, you’ll be looking out for them the whole time and miss the point. .. I didn’t LOVE it the first time (in fact, I think my exact words were, “It was really nice, but it’s not for me.”), but by the 3rd or 4th mass I had experienced, I was hooked for life.” -Danielle H.

“…accept the experience for what it is. Just like the N.O. Mass [you] would probably be familiar with, Mass is not a spectator sport and isn’t there to be analyzed. It’s also not there for your personal “feelings.” It’s Mass and you should go into it fully prepared and expect to be as prayerful, fulfilled or distracted as you would be at any Mass. More than that is a bonus. And again…, it might take a few times for it to sink in.” -Kori R.

“…go for the Liturgy and keep focus on the Liturgy, not on the inevitable shortcomings of some people. [Our church] and places like it exist because of the [Traditional Latin Mass]; the social is secondary, but very rewarding once you’ve found your niche. Actual results may vary.” -John R.

Convinced? Great! Let me know how it goes! Be sure to say a prayer for Jen and Joseph while you’re there. Any remaining questions? Ask away! And in the mean time, swing back to Grace’s for the rest of the quicker takes.

**NOTE: Disagreements of opinion  sometimes arise around here. I always welcome thoughtful commentary and criticism.  Insults and ignorance are not tolerated. I reserve the right to remove or mock any comments I deem inappropriate. Now play nice!