Technically, it’s called “Seven Quick Takes”; realistically it’s a slapped together mess of photos. The unifying theme is my obsession with hand crafting my children’s Halloween costumes. Despite the cursing, hair pulling and temper tantrums (all mine) the rush I get when the costumes are finally complete is stronger than heroin (I’m only guessing here, calm down.) And thus far, every year my kids say they love their handmade costumes more than store-bought ones, and I don’t even do anything all that fantastic. How’s that for successful brainwashing?!

1. This years “challenge” was Byron. Originally, he wanted to be some random Star Wars guy, but then we watched these YouTube videos of people in Transformer costumes that actually transformed and immediately, it was as if rays of sunlight hit the screen and fat cherubs starting singing. There was no turning back from that moment. After constructing an entire battleship transformer costume THAT DIDN’T TRANSFORM AT ALL (who knew it’d be so hard?) I actually created such a scene that Byron uttered, “It’s okay mama, I don’t have to be anything this year.” I pulled it together, looked at the calendar, grabbed an empty box and said “Byron, we have five days to make a transformer out of this box. What looks like a box?” The result; 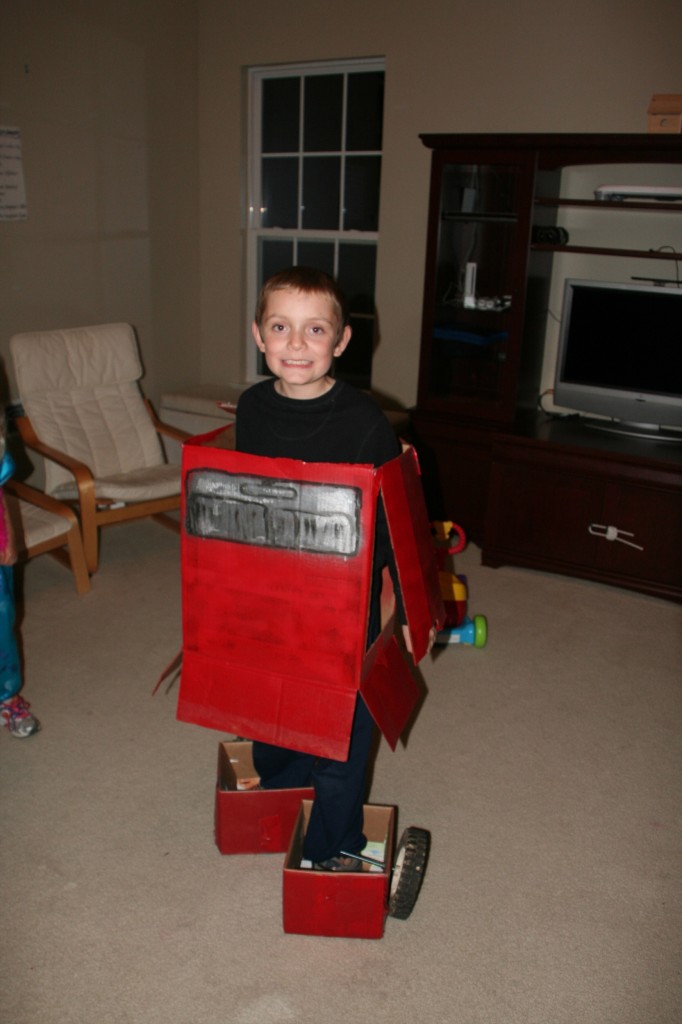 Wearing the costume. It’s made for the effect not comfort.

And BOOM! He’s a flatbed truck. He wore the costume for five minutes at a Halloween party, wowed the crowd, and that’s all I needed. I know, sin of pride Kelly, sin of pride. Off to confession this week. 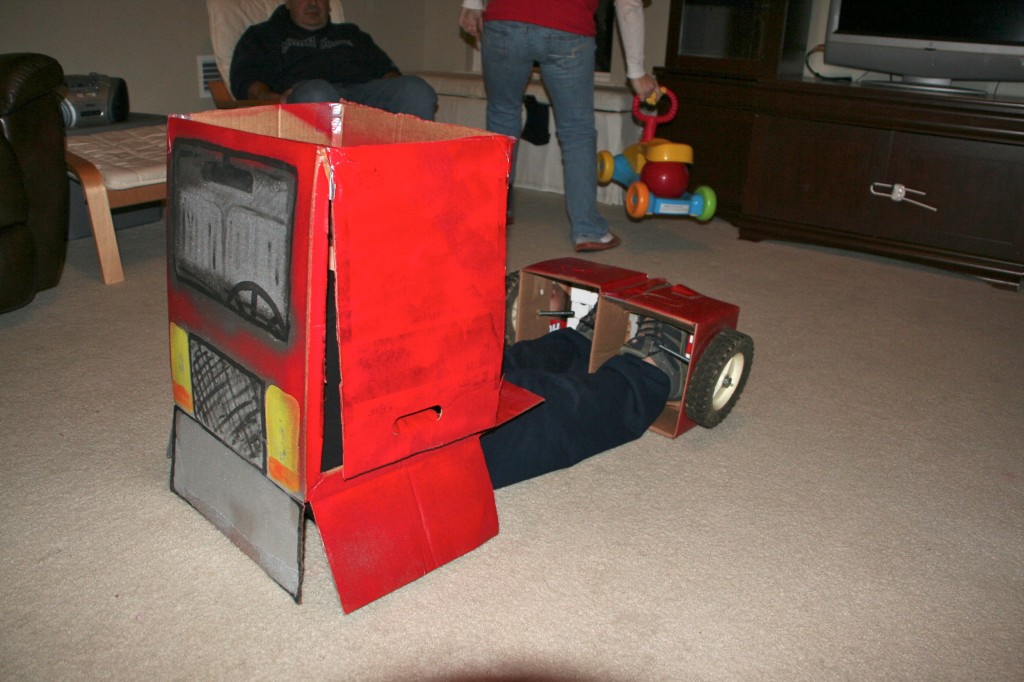 2. Edie as Medusa. I stocked up on snakes from the dollar store but she didn’t actually want to put them in her hair so I had to identify her lest they think she was some Baptist snake handler about to break into tongues. 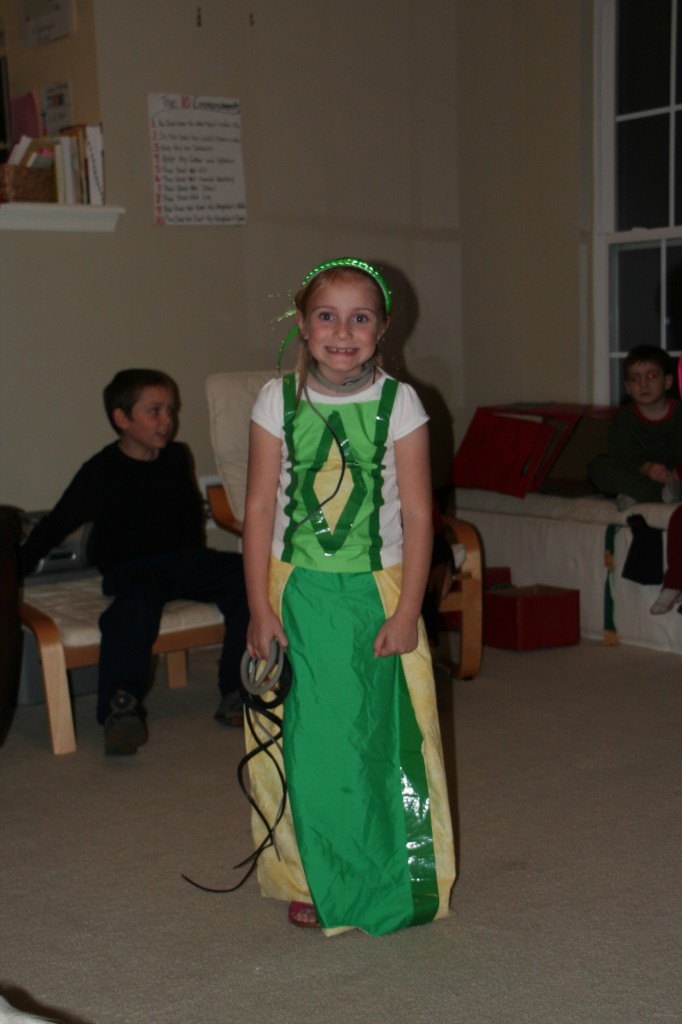 3. Fulton as a police officer. He actually had a siren in the back of his stroller which is maybe why he looks so unhappy. But then again, when do you see a cop in uniform looking happy? He’s dedicated to staying in character. 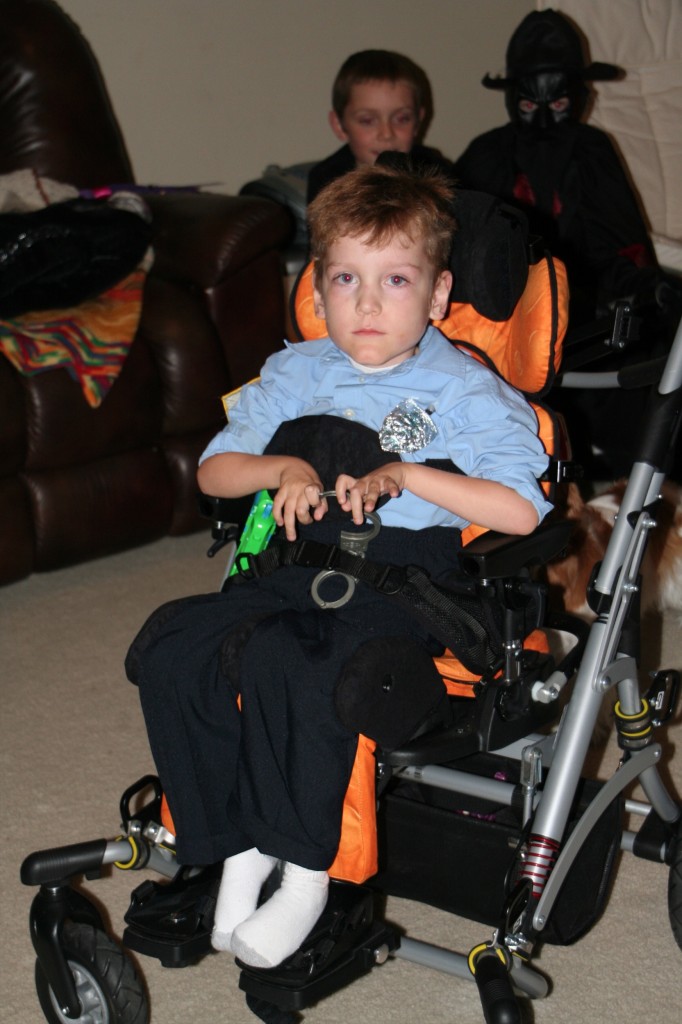 4. When Fulton’s not writing tickets, he’s on the lookout for this guy. Teddy, alias, Cutesy McBear. Wanted in the greater Tri-State area for STEALING MY HEART!!! It’s not all the candy giving me cavities, it’s this guy for being SO SWEET! Props to Addie for making the mask that lasted the length of this exposure; approximately 1/60th of a second. 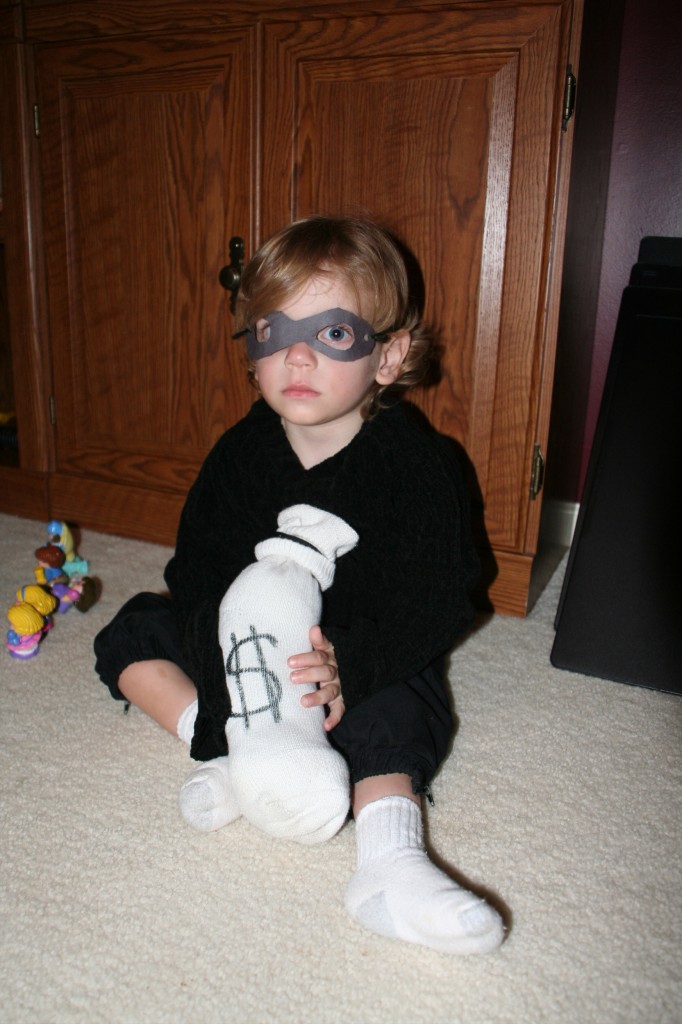 5. Here’s Addie as Princess Leia straight from the apple bobbing tub. She did have a matching belt but it didn’t survive much past our arrival; not enough duct tape I guess. We probably could’ve taken an extra piece off one of her buns as they’re constructed of brown duct tape over newspaper. I went to the party dressed as a Canadian. I wore my awesome shirt pictured below and just said stuff like, “Hand me a Molson, eh! A Labatts would be fine too, eh. Who wants to see my Wayne Gretzky tattoo, eh?” Totally makes you want to have me over sometime, eh? 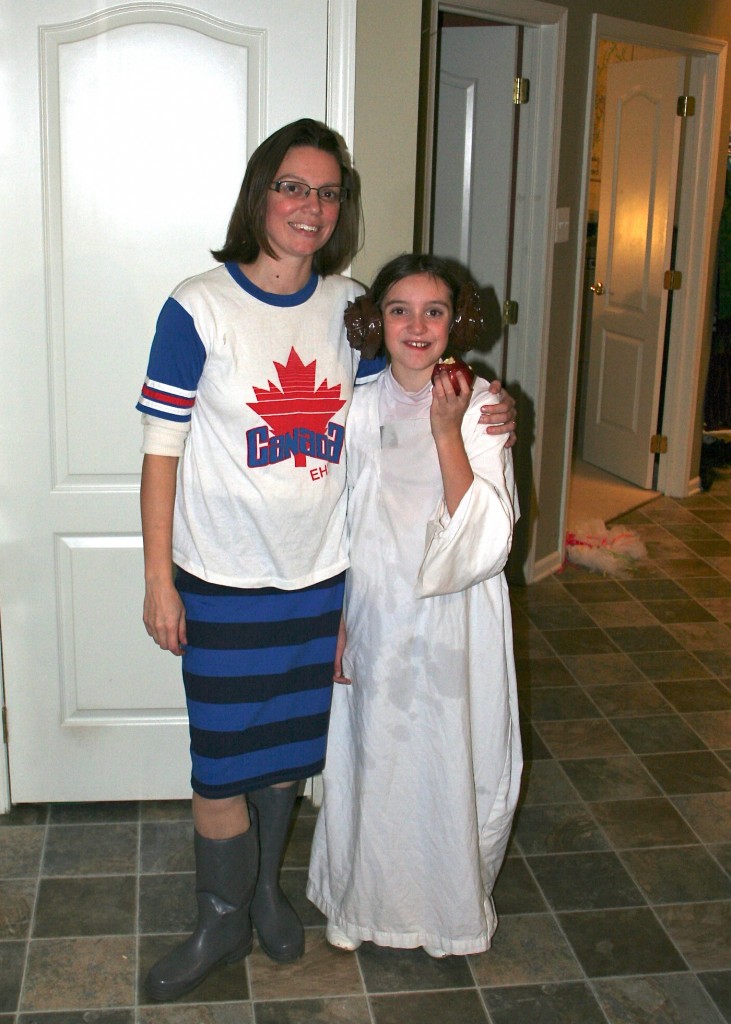 6. One of my favorite Halloween costumes of the past. 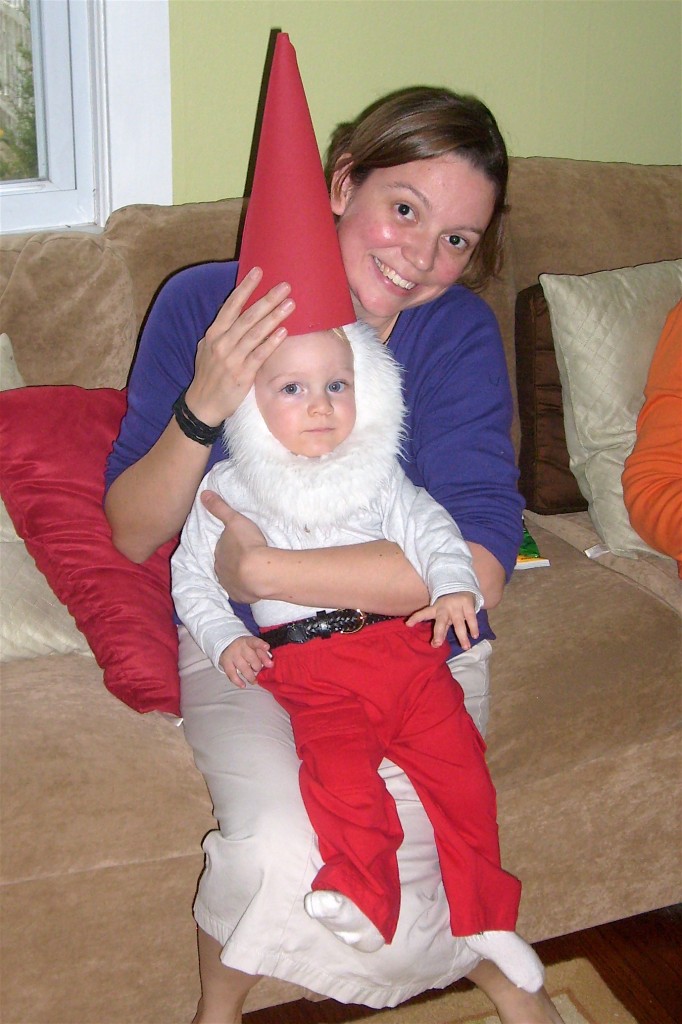 I’ve also done Pippi Longstocking, a mermaid with a tail made from cupcake liners, a werewolf, Thomas the train and Sir Topham Hat, an ice cream cone and a pink poodle. And don’t forget Marie Antoinette.

7. I cannot, however, be held responsible for this. 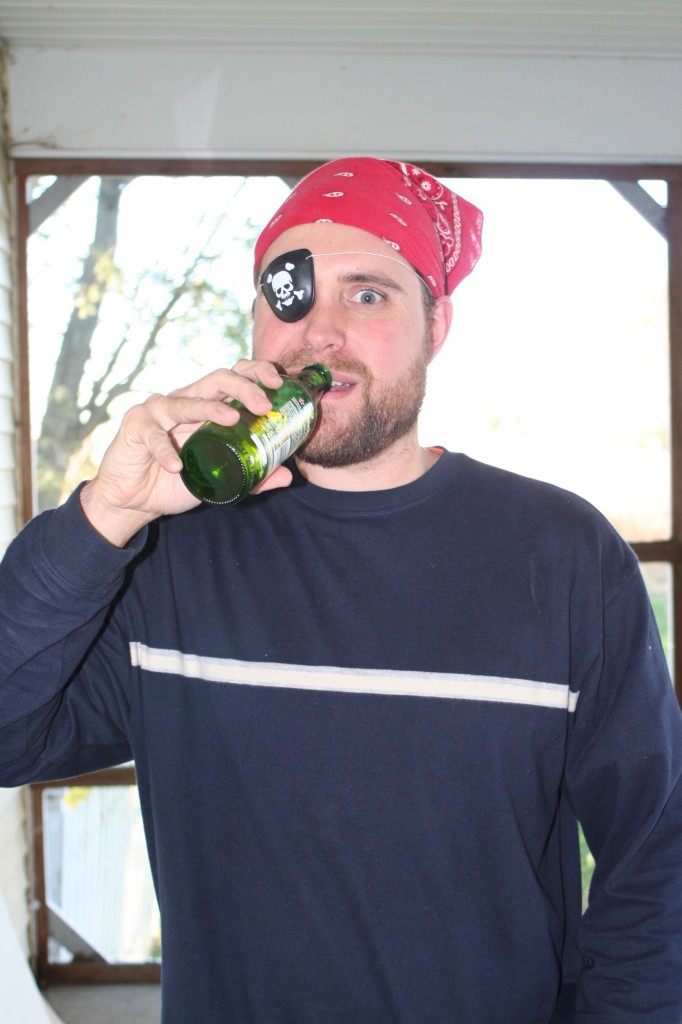 He’s after me booty, eh? I mean ARRRRRR! Someone, teach this pirate some Latin and maybe he can be civilized.

And now be sure to jump over to Jen’s for a bunch of other takes, eh. Unless hockey’s on. Then watch hockey.