Merry 10th Day of Christmas! Joining Jen for another haphazard edition of Quick Takes. Backing up…

1.  We got the kids a trampoline for Christmas, although I think they would argue Tony and I bought ourselves a trampoline. Every day that we’ve been home and it’s not snowing or raining, we’ve all been outside. I love it’s almost instantaneous mood boosting abilities. There were a few times I was feeling holiday stress or anger at all the surfaces in our home being covered by Lego sets. I just went outside, hopped on the trampoline and instantly, I’m squealing like a 35-year-old on a trampoline. No, it’s not pretty, and as people drive down the road past our house, I’m sure they suspect I’ve been locked in a cage for disorderly conduct or something, but man, it is just impossible to be angry, frustrated or give a whoot what people think when you’re on a trampoline. 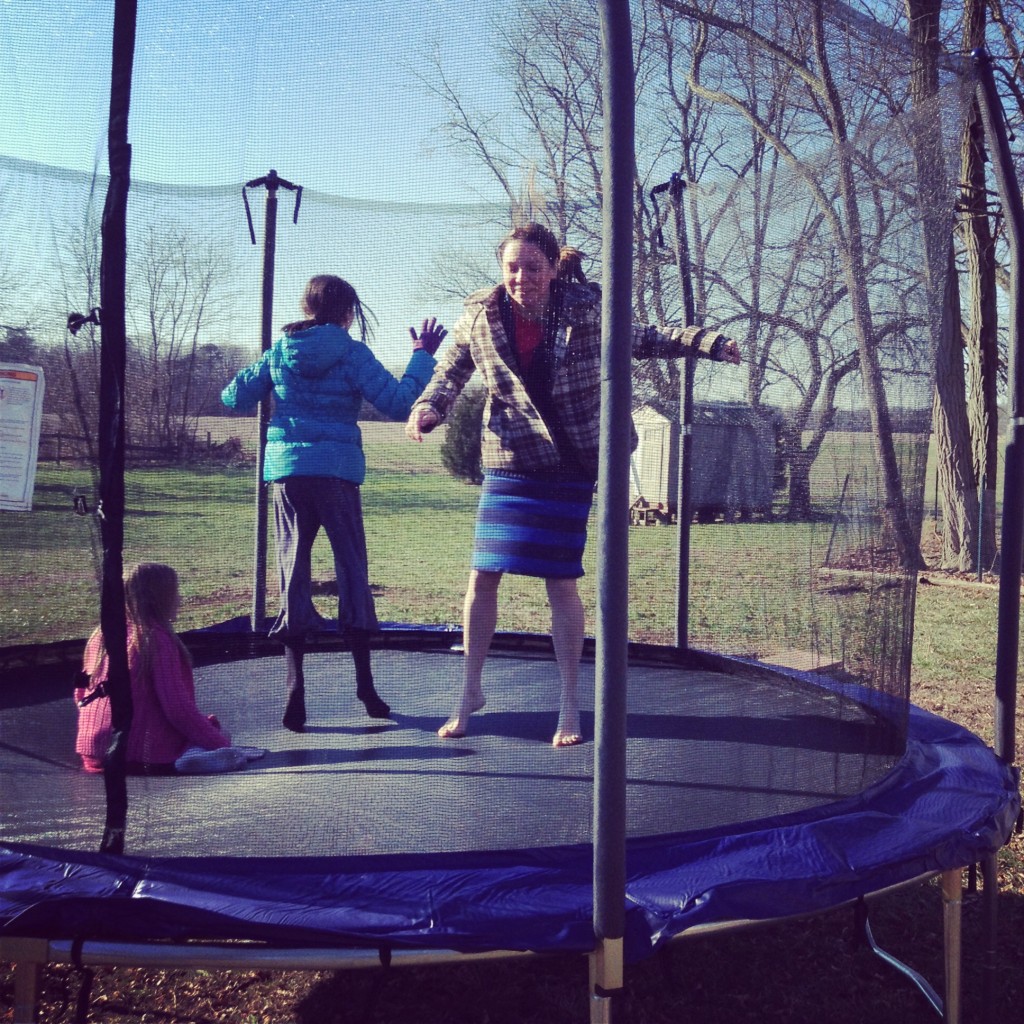 2. On the 26th, Tony’s oldest brother and his family from Virginia came to visit. We haven’t gotten a lot of time recently to visit with them and our kids were stoked to see their two cousins. Tony and I assumed our niece and nephew would want to spend the night here with our kids at least once (rather than at their grandparents.) My brother-and sister-in-law were fine but wondered if we’d mind hosting two more kids, and worried if things would be too crazy here. I had to laugh; what’s two more? Besides, hours on the trampoline earlier in the day meant everyone was ready for bed each night.

3. We also visited the Camden Aquarium which is the nicest thing about Camden honestly. We hadn’t been in a couple of years so everything was new to Fulton and Teddy. But, it was packed! And maneuvering the wheelchairs around oblivious people was exhausting. I’ll admit to running over two people’s toes with Teddy’s chair. It was just too dark at some of the exhibits and Teddy would freeze up and not drive because people would keep stepping right in front of him. Both boys try very hard not to hit people when they drive and feel horribly when they do so accidentally. But it was a fun time, especially for Fulton who’s a huge fan of the show ‘Wild Kratts’ on PBS kids. He was on a mission to find some of the animals he learned about. The whole trip for him was; “WOAH, SEAHORSES!” “WOAH, EELS!” and in the shark tunnel “WOAH! IT’S LIKE I’M SWIMMING WITH CHRIS AND MARTIN!” I’m loving this phase and hoping he continues his love of all things Wild Kratts rather than a return to the days of Daniel Tiger, the repeated watching of which pushed me to the point of almost drinking GF beer with breakfast. Almost. Thank you Martin brothers! 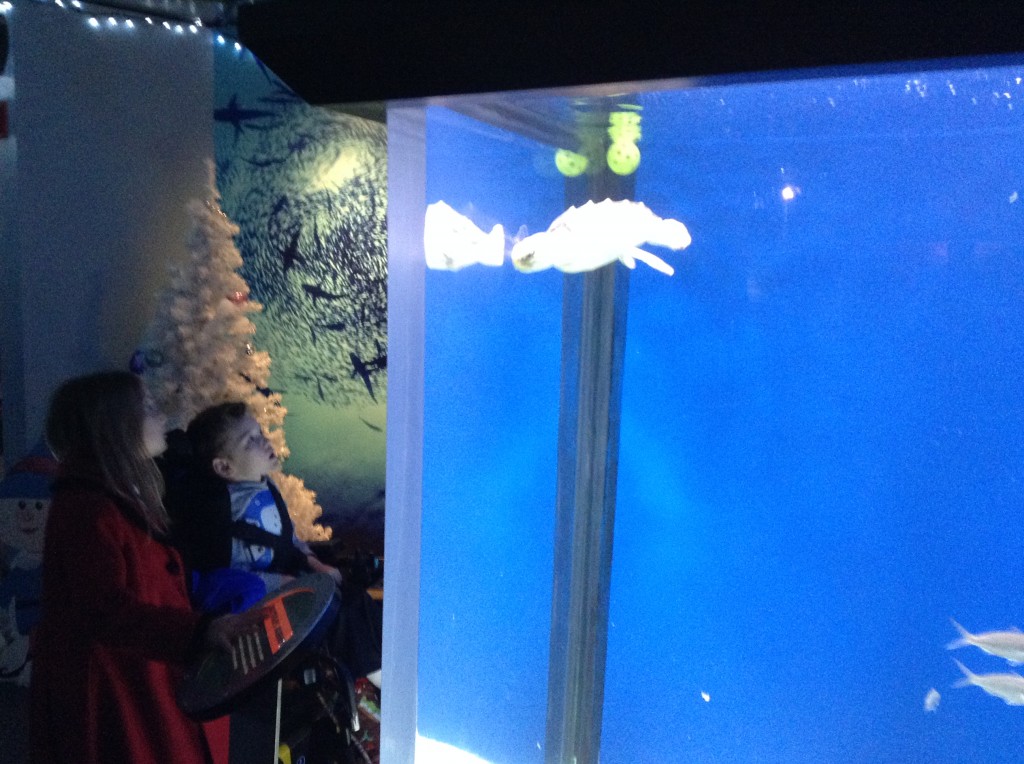 4. For the New Year we headed to my hometown of Lancaster, PA where my cousin was hosting a New Year’s Eve party; adults only. Tony and I have a hard time getting out, especially around bedtime, because of Fulton’s needs, but my mother insisted I go since a lot of my cousins and old friends would be there. Since the party went late, we got the little boys to bed, and headed out, the older kids excited to stay up late with Grammy and watch movies, then watch the ball drop. The plan was to stay for a couple of hours and come home. However….. my cousin went all out with food, drinks, games, a photobooth and fireworks. I blinked, and it was 1 a.m. We made it home around 2 a.m. It was such a great time until 7 a.m. when everyone got up and we rushed to get ready for 9 a.m. Mass.  That makes 2014 the year that starts off by rudely reminding me I’m not in my early twenties. Maybe my “word of the year” should be “moderation”? Or “old”?

5. While in Lancaster, my dad pulled up this old video of musical cows and now it’s all everyone is singing. Your kids will love it and you may fall asleep with it stuck in your head. You’re welcome.

6. Kendra had a lovely post up about blogs to follow and listed yours truly. I was flattered, and thought I should do my own post of new blogs I discovered this year that I would recommend. Better yet, let’s make it a Quick Take!

Look To Him And Be Radiant – crafty stuff

Everything To Someone – pretty photo stuff

and of course Catholic All Year –best pregnancy costume stuff

7. If you’re in the market for canada goose jackets ( or jacka, jakker or jakke) hit me up. These people are spamming me every half hour. 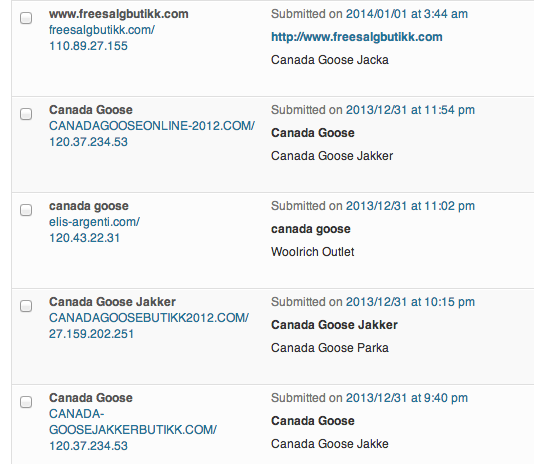 As much of the spam is coming from the same place, I’m tempted to start emailing them back with ‘This Ain’t The Lyceum’ spam. Currently in my drafts folder ready to go:

“You jacka so nice. thisaintthelyceum.org”

“THIS AINT THE LYCEUM. thisaintthelyceum.org”

“My kids all need jacka. Show up your house. Give ’em jacka. Then feed us all you will. thisaintthelyceum.org”

Some Canada Goose Jakke would be great right now with lows in the single digits and the kids still determined to enjoy the trampoline. If you’re buried in the white stuff, stay warm and swing back to Jen’s for more toasty takes.