What To Do When You’re Outnumbered By Tiny Humans

While it seems like a lifetime ago, it wasn’t that far back that I had a three kids, three and under. Then four kids five and under. And six years ago, when Teddy was born, Addie had just turned 8. Things are so different now with no babies in the house it’s almost hard to remember what those difficult early years of my marriage and motherhood were like.

My oldest was due on our first wedding anniversary and arrived a couple weeks early. Three months later, I was pregnant again I was most certainly not ready. I remember calling my OBGYN and asking if the pregnancy test could be wrong because I’d just had a baby. She said no, I was probably pregnant, and then before she could say anything else I hung up and started sobbing. Two weeks after our second anniversary, and only 13 months after his sister, my oldest son was born.

So hey, I’ve been there! But I’ll be the first to tell you that my über fertility was a good thing, and God ultimately brought great joy from our lack of NFP skills. None of our children were planned, and all are a great blessing to us. I’m so glad we left the planning in God’s hands rather than our own. (Even though I might have tried to argue with Him about His plans in the past.) If you got two blue lines on your fourth “just to be really, really sure” pregnancy test and are overwhelmed at the thought of another baby while you still have another in diapers, let me try to offer some words of encouragement. 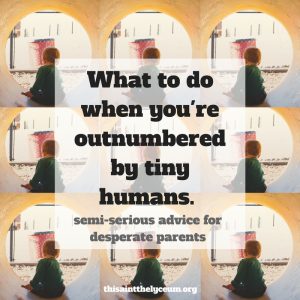 1. Kids grow up really fast. Invest in growth hormones to help speed them along. Maybe you’ll even get one of those giant kids who’ll qualify to be in the Guinness Book of World Records!! Then you can send them off to be part of a side-show for a while and save money on childcare costs.

2. The more kids you have the easier it gets. Keep that in mind next time you’re letting your third child eats child number one’s dinner scraps off the floor. Someday that scavenger will be able to pull up a movie on Amazon for child number five so that you can pour a glass of wine and lock yourself in the bathroom by 4:30 p.m. …plus she’ll have a super sweet immune system from eating out of the dogs dish.

3. Cultivate a village so you don’t have to raise your children alone. That way, when your child wanders off down the street in January with no pants, your friend will walk him home with a laugh rather than call Child Protective Services. And if you don’t live in a supportive, geographical village surrounded by loving friends and family, just join one of the many Facebook groups filled with women drinking coffee and sharing pictures of their kids dumping flour all over the kitchen while their kids continue to dump flour all over the kitchen.

4. Go easy on yourself. When years of your life are dedicated to growing, birthing, feeding and caring for babies and toddlers, housework will suffer. Your ability to sit alone for more than 10 seconds will suffer. You will learn to view a shower as the sinful luxury our Puritan forefathers tried to warn us about. Look that unfinished baby book from two kids ago straight in the gingham trim and quietly exhale as you shove it in a “keepsake” box (that may or may not be a repurposed diaper box.) Let go of any preconceived notion of what motherhood or a tidy household should be, and instead embrace the chaos cocoon. In a short time, you will reemerge from this sticky, cramped metamorphosis transformed into a new women who can unabashedly fly through life…because you have cleaned off bodily fluids from every part of your house, and your hair, and nothing can phase you now!

5. Siblings who are close in age will become the best of friends, until they’re not, then they’re mortal enemies for some reason that no one can identify even though both should clearly know why they’re to blame. But even when they’re not getting along, they can still pass the time together through MMA style crib matches. Just lock the door, walk away and ignore the screaming. When they get older, they’ll still vaguely remember all the head trauma they caused each other and laugh the time away!

6. No matter what, it’s going to be tough. But think of it like Purgatory; sure, we have to endure a painful cleansing period but then eventually, we get to heaven! You gotta keep your eyes on the prize, which is somewhere between everyone remembering to shower at least twice a week and realizing you have clean clothes to wear on a semi-regular basis. Imagine going out and there’s no spit up on your shoulder!  You can practically hear the angelic chorus! Until then, just think of your kids as scouring pads, cleansing you of all your pride and worldly desires. When they yell and cry, and you feel at your wits ends, just scream back, “Thank you for sanctifying me!!!!” before collapsing on the floor. (I like to call it “lying prostrate” when talking to my confessor.)

7. You’ll never regret having that baby. Sure, eventually you’ll threaten to drop all of your children at an orphanage now and again just to watch their eyes get really big, but deep, deep down you don’t mean it. The kisses, the sticky cuddles and loving exclamations uttered with a lisp too cute to correct will soften your heart and help you see how precious these screaming hellions really are. It doesn’t take long before you realize you can’t imagine what life was like before all these blessings took over your life and bed. Frankly, it’s amazing you keep having kids when you realize how little time you and your husband have alone but, here you are…again. Your mattress isn’t getting any bigger but whatever, eventually you’ll have the whole thing back to yourselves, someday.

How was your week? Write it down then link it up below. Be sure to include a link back to this post so your readers can find the rest of the Quick Takes. I look forward to reading your posts!An InLinkz Link-up