I finally got around to picking up the camera again, and not just on a Wednesday night. Beautiful weather equals more recess for everyone, including Mama. The kids finally took an interest in gardening (probably because I said I was giving it up this year) and are maintaining three raised beds of their own. Twenty-six baby chicks arrived so, of course, at least once an hour, someone needs to go check on them, especially during math.  The bikes and outdoor toys are strewn across the yard and driveway, which means spring is in full bloom here. Despite periods of heavy downpour, I think I manged to capture some of the sunshine that came our way this week. 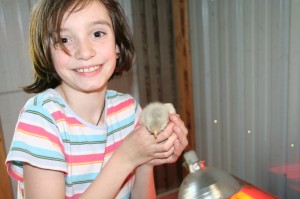 I could call this picture “Two hot chicks” since it was unseasonably warm that day, however I don’t want my daughter’s picture turning up on some unsavory Google search. Instead I will reflect on children and chicks. Both are adorable when little but as adolescents would sooner peck you then let you snuggle them. However, only one will end up in the stew pot when her inability to produce eggs wanes. 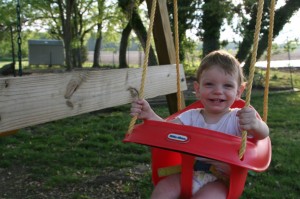 He’s so loving this swing he doesn’t care he sitting in a hugely bulging wet diaper. I, in my quest for a cute photo, will ignore it also. 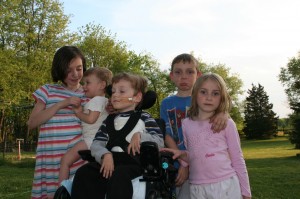 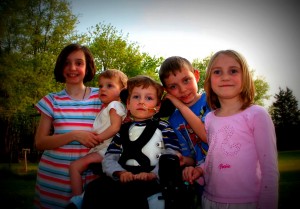 The left group shot is the typical kids picture around here. My oldest son looks like one of those sad, hobo clowns.  Maybe he’s upset because my blonde haired daughter has become a zombie. Everyone else forgot why I was standing there yelling.  The right side shot is pretty good. I just wish my son in the middle didn’t look like he was posing for a daguerreotype. He’s got this stone cold expression, like I’ve asked him to sit still for 10 minutes to get the right exposure. 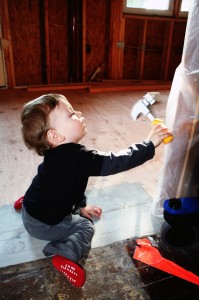 A real hard worker. It’s the same happy camper contributing to our home renovation project (in a clean, dry diaper I can assure you.) His fleece pants actually do the best job of collecting construction dust from off the floor. I’d like to think that his efforts could somehow speed up the completion of our new kitchen, but, unless he’s going to start threatening to break kneecaps with that Tonka hammer, I think we remain at the mercy of the contractor.

And, as aways, be sure to stop by the rest of the links at Like Mother, Like Daughter. I’m really going to do a better job of hopping around and visiting you all myself. 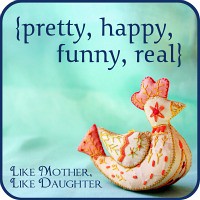