Take Seven Quick Takes And Call Me In The Morning

If you’re wondering on my recent lack of posting, here’s this week’s Seven Quick Takes quickly produced under duress to bring you up to speed on my lost days spent hiding under the covers, pail by the ready.

1. Friday I was diagnosed with a salivary gland infection or stone.  And because my father-in-law once had stones in his salivary gland, and it had to be removed and something went wrong and he almost died or something, I kept thinking, “If I die, I’ll never see my new kitchen completed!”

2. Saturday brought the joy of  a German festival in my hometown of Lancaster, PA with all the beer, brats and saurkraut you can handle. We came, we consumed, we polka’d and we looked like complete amateurs next to the 80-year-old couple in a dirndl and lederhosen who nearly plowed us down on the dance floor with no mercy.

3. Sunday I got the sneaking suspicion I was succumbing to a slow death by salivary gland infection, before throwing up and having Addie come in our room and throw up. Either Addie’s salivary gland was having sympathy pains or we were dealing with something else.

5. Tuesday I tried to lay around less and that was bad. I told Tony to go back to work, that I would be okay, and I was wrong.

6. Wednesday I really needed to start trying to tackle the rubble left in the wake of my illness.  Apparently, when I’m sick no one knows what to do except let the work back log for me to do when I’m feeling better. I went to the grocery store that night and  I found myself in the pasta aisle thinking, if I threw up right now, would they let me finish shopping, cause, I really need to get food.

7. Thursday I felt mostly normal but becoming quickly overwhelmed with all the school and housework that had accumulated. I became Godzilla in my effort to destroy the Mothra of clutter and made things much, much worse. I was shrieking and waving my arms and the kids were all running from me in terror. Not one of my finer moments. 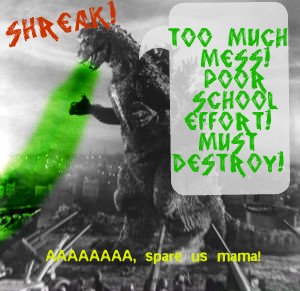 A salivary gland infection will give you green mouth glow. And yes, my thighs are that big.

Today, I’m not leveling coastal towns quite so much and the radioactive breath has died down considerably. I might even get something done. If your week was great or otherwise, take two, call me in the morning and head on over to Conversion Diary for more Quick Takes.