The Changing Of The Seasons

Fall is finally here. The leaves are clogging the gutters, the chickens are attacking the cornstalks we’ve tied to the front porch and a few nights back we finally fired up the woodstove. Watching my daughter haul and stack firewood in a t-shirt, Crocs and ski gloves made me realize I could no longer postpone the inevitable;  the seasonal changing of the clothes. Every spring and fall it looks like the Target children’s department has exploded in my house. And that’s on top of the usual mounds of clothes that never make it into a hamper or drawer. With five growing kids of all shapes and sizes, it’s an overwhelming task that can quickly bring on a tantrum or spontaneous 3 hour fashion show, neither of which I’m in the mood for.

I’ve already got Teddy’s clothes sorted, so at least one child is done. With nobody coming up behind him, I just toss everything into giant Rubbermaid tubs and say a prayer it’s all clean.

Edie should also be so easy, however she wants to try on everything. It doesn’t matter that Addie is three years older, if it no longer fits Addie, Edie is pulling it on and strutting around deciding how she feels about it. My cries fall on deaf ears. “Edie, it’s too big. You need to grow into it. The v-neck is showing your underpants. Wait, aren’t those Addie’s underpants? No you can’t just put a sweater over it.”

Addie hurriedly goes through her closet, pulls out everything, because, you know it’s been a year which means she’s grown at least another 8 inches. For the next hour she complains about needing all new clothes and sighing heavily as Edie parades around their room in all of Addie’s favorite old clothes. Heaven forbid that Edie turns her nose up at one of Addie’s favorite dresses. Next thing I know, Addie is trying to wear a dress that fits her like a t-shirt because Edie doesn’t appreciate it.

“Look Mama, if I wear it over top of this other dress, it’s not too short.”

“Uh, never mind that I will never let you out of the house looking like that. And just because you wear it with oversized rainboots that come up to your thighs, doesn’t make it somehow more acceptable.”

Then there’s Byron. If he hasn’t stained (a.k.a bled all over) or ripped an article of clothing, I need to pack it up carefully for his two younger brothers. However, Byron would rather sit on a hot woodstove than help me sort his clothes. Once I made him try on some  jeans a friend handed down, and he just about died. (He refused to wear jeans for months after that.) Byron gets dressed by running to his dresser in the morning, pulling out underpants, a shirt, pants/shorts, putting them on as quickly as possible while thinking about Star Wars, and then running off. If I don’t fill him in on the weather, or clean out his undersized clothes, it’s completely possible that sometime in January he’ll sit down to start school wearing an undershirt  and size 6 pants, both on backwards. Once I forgot to examine him before going to Mass and when he jumped out of the van, I saw he was wearing what looking like women capris, they were so tight and halfway up his calves.  I didn’t know whether to let him serve so the cassock would cover his outfit, or hide him in the last pew.

So while Edie is upstairs sorting clothes into piles by what she’ll wear tomorrow (which is, by far, the largest pile), what she’ll save for Sunday and a ‘that’s disgusting, don’t even let that touch my tomorrow pile’, Byron is downstairs doing anything possible to hopefully speed up the switch-out process, which inevitably makes everything take twice as long.

“Byron, do those jeans fit?”

“They look small, try them on.”

Me turning around for a split second.

So I’m gearing up for all the fun and excitement that’s me hauling 50 million poorly labeled tubs from the back of my storage closets. This might be the year I rent a dumpster. 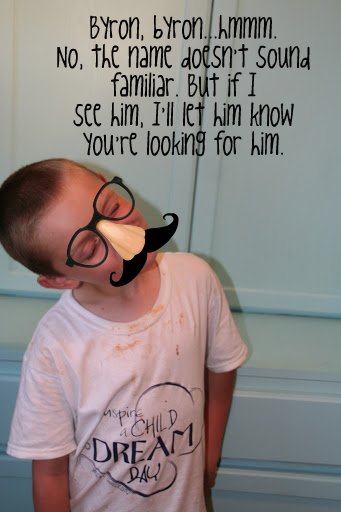