Things I Love; My Conquistador Lamp

The summer before my junior year of college I fell in love with a Spanish man. It made no difference that I was still dating my high school sweetheart. As soon as my eyes beheld the Conquistador’s thoughtful eyes, dark beard and pumpkin pants I knew I had to make him mine.  Thankfully, he was for sale.

He sat quietly in the corner of the motel gift shop where I worked. In addition to the usual touristy bric-a-brac, our gift shop included one of a kind “antiques”;  i.e. flea market finds the owner bought and tried to pass off as collectables to unsuspecting guests. But my friend, the Conquistador lamp, he was different. Every day he watched me from his tabletop. His strong ceramic build was accented with a shiny suit of armor and gleaming helmet from which the light bulb and shade extended. At first I questioned the folly of falling for a lamp. Such a relationship could never work out. My room at home and dorm at school both lacked the space to properly showcase him. Plus, the lighting elements were old, the bulb often tilted to the right and the shade was discolored.

I argued back and forth with myself, weighing the pros and cons of spending several hours worth of pay on the lamp. However, at the start of every shift, I heaved a sigh of relief when I arrived for work and discovered he had not been sold.

At the end of the summer, I purchased the Conquistador lamp much to the delight of my boss who quickly replaced it with another marked-up garage sale find. My college roommate, an art student, saw the beauty of the lamp and welcomed it into our abode. My boyfriend hoped it was a passing phase.

Fast forward twelve years and seven moves  and he is still with me. Yes, I wound up marrying my boyfriend but I remain in love with the lamp. With every relocation I had to take special care to make sure the lamp was never “accidentally dropped” or “lost by the movers” or “run over by the moving van.” My husband remains cool towards the Conquistador. He can’t decide whether it’s better to hide the lamp in the bedroom, so guests can’t see it, or place it in the living room so he doesn’t need to look at it at night.  My children are confused by the fact that their mama, who is so quick to dispose of their clay pots or popsicle stick masterpieces can cling so completely to a lighting fixture. Even when we read about Cortez and I was so excited to have a visual to show them, they failed to see my Conquistador’s allure. “Look children, my lamp can give you an idea of how Cortez and his men looked, gazing out on the unknown wilderness that awaited them. Its obvious why the Aztec mistook them for Gods isn’t it? Of course, Cortez wouldn’t have been dusty like this but..kids? Kids! Why aren’t you paying attention?”

Although not everyone can appreciate my Conquistador lamp, I remain firmly enthralled with him. He has captured my heart as completely as the Spanish seized  Tenochtitlan. 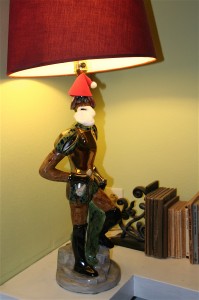