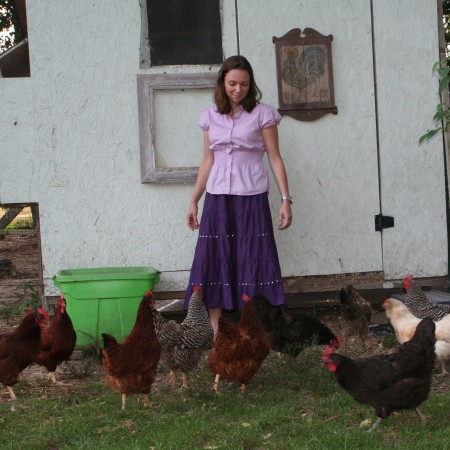 The only members of my family holding down their food following Saturday’s Vigil Mass.
Skirt, shirt: Burlington Coat Factory

Doing Mass in shifts this weekend due to a nasty stomach bug. First Byron fell victim, then Tony, Addie, Teddy, Edie and finally Fulton. I’m the last one still standing. Since Fulton has a specialist’s appointment on Wednesday, I’m pretty sure that’s when I’m going to get sick. We had to miss Tony’s godson’s baptism, reschedule Fulton’s birthday trip to the demolition derby and Addie missed two carpools willing to drive her the six hours to summer camp. Thankfully, the nuns are fine with her late arrival and my dad offered to take her up for us. (Pappy of the year award!) Once we got Addie’s transportation squared away, my husband’s car died. Needless to say, despite the warm summer sun, it feels about as cheerful around her as the most frigid and grey January day. The biggest difference is how much sweatier we are, so we’ve got that going for us.

What else can I say? I was thinking of taking a photo of me in my outfit with Edie standing next to me holding her puke pail, but she was too busy actually puking to cooperate with a photo op.

I know what would cheer me up: posting everyday this week! If I go mysteriously AWOL during the process, you’ll know I’ve succumb to the stomach bug (which could possibly inspire a really great Five Favorites or {pretty,happy, funny,real} if I work through the pain.)

While away on vacation I actually got several post ideas  and it’ll be nice to have an excuse to write them all down while they’re fresh in my mind rather that waiting until I stumble upon an idea in my draft folder three months later and have no idea what I was getting at. Plus I know Grace has nothing better to do than sit on pins and needles waiting for me to pen and link up my earth shattering ‘How We Met’ post. Hold on Grace! It’s coming, with plenty of grainy photos!

The trick will be to get it all done without abandoning my husband and children, especially with Addie away. Good grief I miss her already. Hopefully blogging, with just a touch of wine, will fill the void. (Just gotta remember to hit ‘save draft’ not publish.)

Until tomorrows installment, swing back to FLAP or Conversion Diary, lest this intestinal parasite is contagious via the interweb. Although, if you’ve made it this far, you’ve probably already caught it. Sorry.