Veils: The Other Mass Accessory

Catholic . Most Popular . What I Wore

To veil or not to veil; that is the question…..that I am not touching with a 10 foot pole. I’ll let you decide for yourself whether you feel compelled to veil, a.k.a wear a head covering at Mass, or not. Maybe you’re considering doing so for Lent and are uncertain of how to proceed. Maybe you associate veiling with that one little old lady who wears a doily on the crown of her head and sits in the very front of your church at daily Mass. As someone who’s been veiling for seven years (ever since we started attending the Extraordinary Form) I thought I would use this week’s post as a beginners guide to keeping  your crowning glory under wraps.

This is a typical head covering for me at Mass. Is it childproof? No. Do I sometimes forget to wear it? Yes. But scarves tend to be  my go to veil of choice. They double as nursing covers and when worn as above, there’s actually enough slack so if Teddy grabs at it and pulls, it doesn’t always fall off my head. The strangulation risk is minimal. 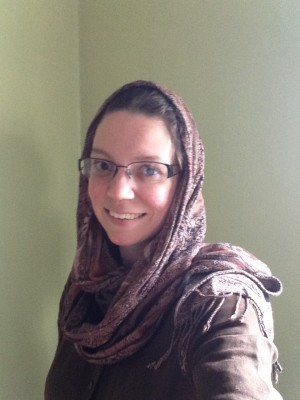 Many other women wear a lace mantilla. Addie once wore a lace table runner for a couple  years as her head covering, but that’s a story for another time. 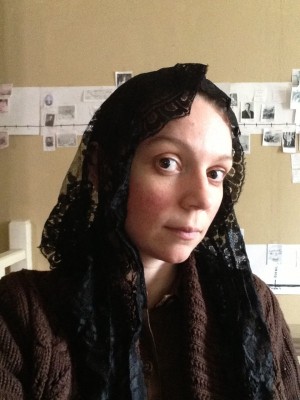 Mantillas come in all colors and sizes, but black and white are the most common. The lace texture makes it easy to secure with a bobby pin or two; however I’ve always found that when a child rips at a mantilla that’s pinned in place, not only does the mantilla come off, but so do the bobby pins and large clumps of my hair.

If you’re at a parish where most women don’t veil and dress is typically very casual, showing up in a lace mantilla might make you stand out, the exact opposite of what you’re trying to do. Since I now veil at all Masses, whether we’re at our home parish or not, I’ve found some stylish ways to veil that keep me covered but don’t scream “I believe I’m holier than thou, and BTW, you’re all going to hell for wearing jeans to Mass!”

First, hats. No matter what you wear to Mass, you can find a hat to accessorize. Several teens at our parish wear loosely crocheted caps, while other women sport berets or a fancy cloche 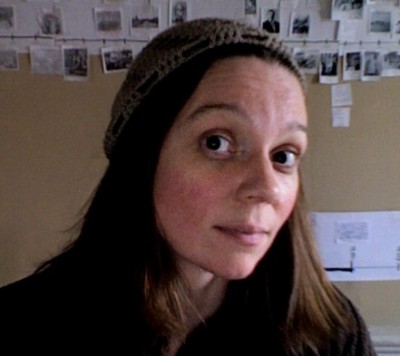 Me pretending to be a trendy teen. The dark circles give away that I’m slightly older…just slightly.

While I take a very lazy approach to wearing my scarf, when I visit other parishes, I often do a simple styled scarf head wrap. 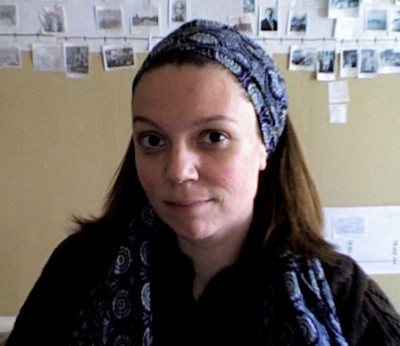 However, there are several good sites which list more elaborate headwrapping styles. Not only will you be veiled, you’ll also be able to stylishly hide the fact that you didn’t shower before Mass…oh, wait that’s just me? Most people would only think of your head covering as an accessory rather than “a statement,” if they noticed it at all, which might help you adjust to wearing a veil if you’re in the minority at your church.

Veiling doesn’t have to be unstylish, just like modesty doesn’t equal frumpiness. But trying to make a fashion statement with your head covering would be counterproductive. 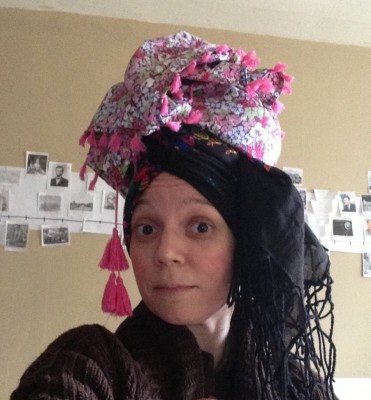 Over the top, just maybe? When the guy sitting behind you can’t see the priest, you might need to scale it back a bit.

So there you have it. Once again, I’m not pressuring anyone to veil, but if you feel compelled to do so I hope I’ve helped alleviate some of your reservations. I know I’m blessed to be at a church where veiling is the norm, rather than the exception so I don’t feel out-of-place. I never felt a lot of pressure to veil, I just tried it, read and prayed about it, and ultimately embraced it completely. Your journey may be different so don’t stress about it. Let me know if I can answer any of your questions.