#wmof2015 A Long Week of Me Being Overly Excited

I didn’t think Monday would prove all that eventful. All I had to do was pick up press credentials, scope out the venue and attend a luncheon / presentation.

But, I’m gonna write about it like it was a huge freaking deal because I was, in fact, giddy the entire time. Pretty sure I will actually have to invest in Depends for my remaining visits as I’m likely to crap my pants with excitement. Rows, and rows of Center City porta johns be damned!

First, if you’ve never been to the PA Convention Center you might think of it as just a building, maybe with an especially nice entrance…and you would be so very, very wrong just as I was. As I approached the “building” from the train station and tried to enter at the first set of doors a guard directed me to another entrance about two blocks away, where the luncheon and exhibit were set up. As I hoofed it in my ugly, yet sensible footware, I calculated that the Convention center is probably the same size as the Vatican City, thus it’s logical designation as the host for the 2015 World Meeting of Families.

Of course my bag was searched and everyone looked at me strangely as they pulled a multi-tool from one of the compartments. “It’s all allen wrenches for my boys wheelchairs!!!” Thankfully, they believed me and I was admitted, though without the tool which I had to pick up upon leaving.

Inside I registered and sat at a table with parishioners from Saint Cyprian’s in Philadelphia where they offer an English, Nigerian and a Francophone Mass, plus a reporter from Costa Rica AND the local Metro paper.We ate, chatted and listened to a presentation on the Museum of the Bible which includes traveling exhibits, education programs and a location in Washington DC opening fall 2017.

As someone who loves history, books and of course, her faith, I found the presentation fascinating and sent out numerous tweets during the event because, as I explained to everyone at my table, I’m a blogger and this is what I’m expected to do. (i.e. I don’t get out much and I’m awkward at parties.)

Did you know that bible verse numbers were not added until the 16th century?? @museumofBible #wmof2015

I then toured the exhibit which is free and open to the public until Saturday and includes Dead Sea Scroll fragments, illuminated manuscripts from the Middle Ages, Greek texts, Ethiopian bibles, early American bibles and so much more! Once again, it was nice to attend an exhibit where I didn’t need to explain to my kids why all of this was SO COOL. Since D.C. isn’t a horrible drive (when Tony’s driving) I can definitely see us taking a field trip in a few years. I was such a fan I had no qualms about snagging a swag bag full of free things I don’t need but that made my kids day. “Oooo!!! Mama can this be my water bottle now?!?!”

Then I took off to another far corner of the Convention Center to pick up my credentials, passing people from all over the world, literally. EWTN was already setting up and live broadcasting and the selection of Pope stuffed dolls was not yet depleted. As I approached the media desk the attendant asked what media outlet I was with and I explained I was a blogger at This Ain’t the Lyceum and she smiled and made a comment like she had actually heard of me (or maybe made mention of somebody on Twitter filling up the #wmof2015 hashtag with tedious Museum of the Bible updates.) 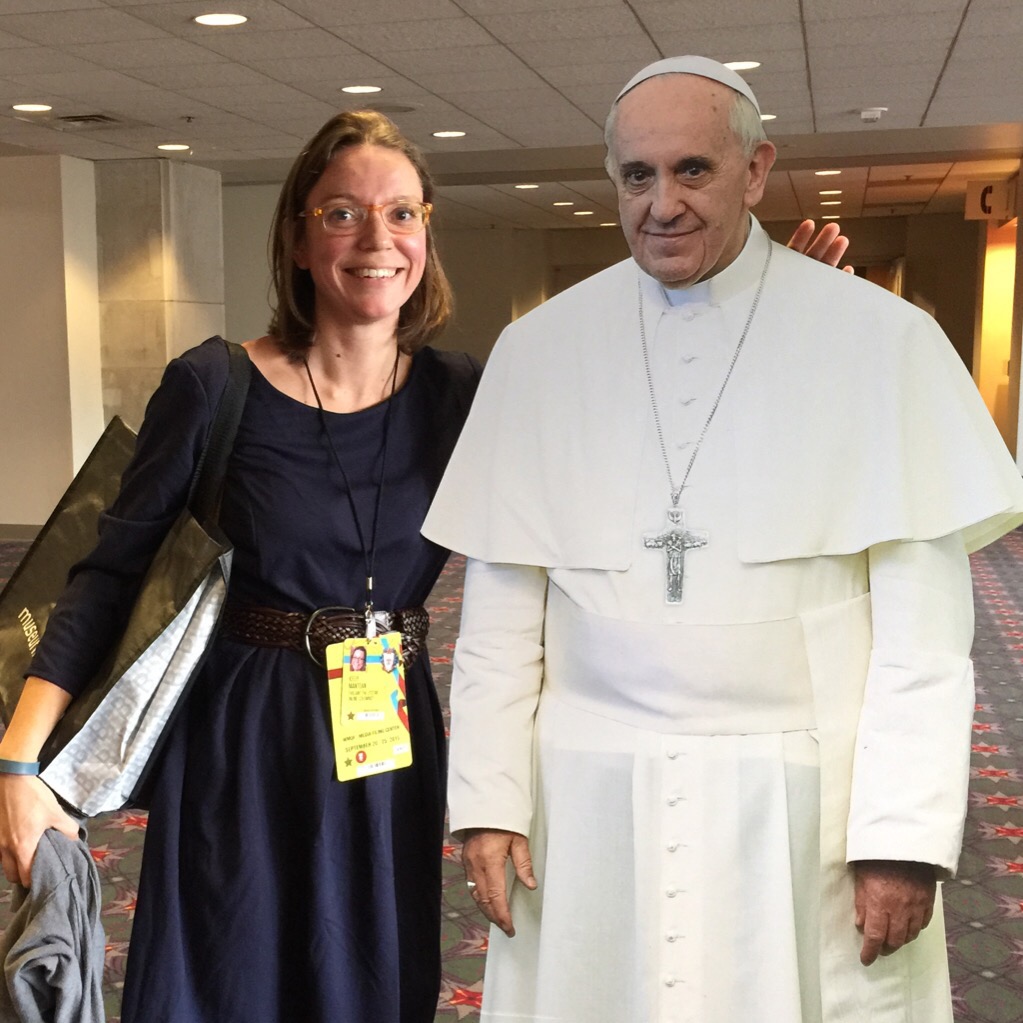 Ran into this guy trying to buy a bobble head of himself in the Convention gift shop.

I’d accomplished my mission, and now it was time to head back to reality where two kids still needed transportation to music lessons. As I made my way to the exit I spotted two familiar faces and ran over and hurriedly introduced myself to Lisa Hendey and Pat Gohn (who I had been stalking on Instagram as they documented their approach to Philly.) We snapped pictures right before they went to work Periscoping (is that officially a verb yet?) a couple from Honduras about their visit.

As I watched the broadcast, I glanced around the hall where more and more people kept filing into register. Though it would probably be cliché to say you could feel the excitement, it was totally like that experiment where you place your hand on a metal ball and your hair stands on end. No wait, that doesn’t make sense. It was like entering a party with a couple hundred thousand of your closest friends. I probably could have gone up and hugged anyone in that room and become best buds.

My short Monday visit makes me even more excited for Thursday. Until then, I’m following the #popeintheus , #wmof2015, and #popeinamerica hashtags on Instagram and Twitter. I’m also part of a group of Mid-Atlantic bloggers covering the World Meeting and Papal Visit on the ground, at all locations. Read more about our effort at These Walls and follow along!

There’s so much crap in the news and on social media these days; I don’t doubt that Satan is working overtime to distract and distort what’s out there in order to spread hopelessness and despair. But the good news is still around; follow it, spread it and pray for our Church, our leaders and even for our enemies. If blessing yourself is like punching Satan in the face, spreading the joy of the World Meeting and Papal visit across the internet and onto the screens and homes of people around the world is equal to a wrecking ball in the gut. We have our differences, even amongst Catholics, but to see so many believers come together in one place to celebrate our faith and attempt to grab just a glimpse of our Supreme Pontiff has to be encouraging to even the greatest skeptic. This week, hide all the haters from your Facebook and Twitter feeds. Turn on Catholic media and celebrate a truly universal gathering.

“And I tell you that you are Peter, and on this rock I will build my church, and the gates of Hades will not overcome it.” -Matthew 16:18